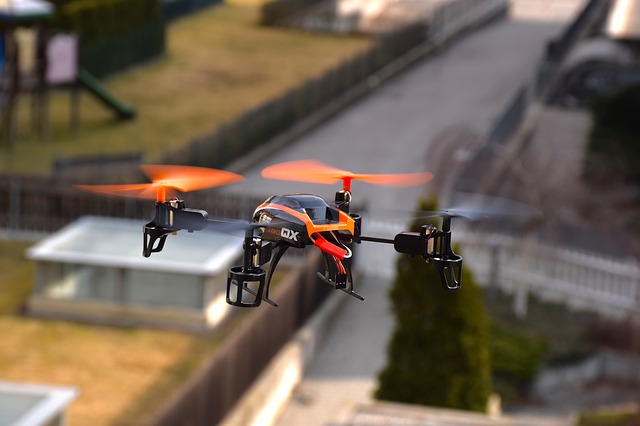 The general term 'drone' refers to robotic vehicles. However, it has come to be associated more specifically with unmanned aerial vehicles (UAV).

They range in size from full-scale aeroplanes or helicopters, to small hand-held vehicles similar to the model aircraft used for recreational purposes.

Drones are widely known for their use in military operations, but as the cost of the technology required has fallen, they have been developed for a number of civil applications such as; film making, surveying, crop spraying, and so on.

In the construction industry they can give relatively easy access to large or difficult sites or to large, complex or tall structures. They can gather aerial data, mapping information and images that can be used for:

Their set up costs are generally low compared with full LIDAR surveys, or the use of cherry pickers or scaffolding to access difficult areas, and they can gather information over a wide area and from a variety of viewpoints. They can also be faster than other methods and can reduce safety risks.

Drones can be operated remotely from safe areas several hundred meters away from construction works, as long as the pilot has a clear line of sight of the flying zone. Small drones can be transported in a case, set up quickly and can gather high-resolution information and continuous footage. The pilot is given a real-time view on a remote monitor and can manoeuvre the drone and zoom in to obtain additional information where issues are identified during flight.

Drones can return and land automatically in the event of problems occurring, and have can be shut down in emergency situations. If required, they can be programmed to take-off, follow a flight path, perform specific tasks at defined locations and auto land. Information gathered can be automatically uploaded to the cloud and viewed on tablets by the project team.

However, there are dangers associated with flying aircraft, as well as public concerns about privacy. In addition, drones have limited payload and may be difficult to operate in poor weather conditions, or where there is poor visibility.

In 2010, the Civil Aviation Authority (CAA) introduced regulations for '…the operation of small unmanned aircraft used for aerial work purposes and those equipped for data acquisition and/or surveillance'.

Certain sizes of vehicle must be registered, and where a flight is proposed within a congested area or in proximity to people or property permission must be obtained from the CAA. The CAA require that operators demonstrate piloting competence and that they have considered safety implications before permission is issued. This may involve a risk assessment for a one-off flight or submission of operating manuals for regular operators. Insurance is also required. (Ref. CAA.)

Some larger construction companies have made significant investment in construction drones, with the intention of having multiple drones continually flying over sites monitoring safety and tracking construction progress. They might also include additional sensing capabilities such as; ultrasonic sensors for avoiding collisions, LiDAR capability, infrared scanners, temperature sensors, air quality detectors, radiation monitors, and so on.

Mike Lewis, Bechtel's manager of construction, said: “This technology helps improve safety and quality of project delivery by providing real-time data and analysis to project teams so they can act in a timely manner.” (Ref. Global Construction Review 8 April 2015.)

Experiments are also underway to see whether construction work itself might be possible with drones, for example, placing objects in difficult to access locations, positioning and fixing cables and so on. However, this is likely to be restricted in the short term by the weight that affordable drones are able to carry.

In August 2015, MIT Technology Review reported that drones were being used on the construction of the Sacramento Kings' stadium in California. Drone footage of progress on site was converted into a 3D model that could be compared to digital drawings to identify where progress was behind programme.

In July 2017, the government announced plans to introduce new regulations aimed at improving safety and security surrounding drone use. According to the new regulations, drones weighing more than 250 g will have to be registered, and users made to take a safety awareness test to demonstrate an understanding of safety and privacy laws.

The move has been prompted by reports of 22 near-miss incidents involving commercial airliners and drones in the first four months of 2017. The government also plans to expand the use of geo-fencing. This uses GPS coordinates and programmes drones not to enter certain locations which are restricted, such as prisons or airports.

On 1 January 2021 the rules changed when new EU regulations governing the use of drones came into force in the UK and across Europe. Developed by the European Union Aviation Safety Agency (EASA), these new regulations adopted a risked-based approach, no longer distinguishing between leisure and commercial drone activities. Anyone flying a drone commercially must still obtain a ‘permission’ for commercial operations from the CAA by passing a theory and flight test. As part of the process, an operations manual must also be developed and approved by the CAA, detailing every aspect of the proposed drone operation, including risk assessment, insurance, maintenance and their safe flying within the required visual line of sight limits.

Ref 'Using drones for inspection and survey' in Context 168, published by the Institute of Historic Building Conservation (IHBC) in June 2021, written by Paul Bryan.

Retrieved from "https://www.designingbuildings.co.uk/wiki/Construction_drones"
Create an article