Radiation is a heat transfer mechanism, along with conduction, convection, phase change and mass transfer. All bodies which are hotter than 0°K emit thermal radiation. They also absorb thermal radiation emitted by their surroundings. The difference in the total amount of radiation emitted and absorbed by a body at any given moment may result in a net heat transfer which will produce a change in the temperature of that body.

Thermal radiation includes all those wavelengths of the electromagnetic spectrum which will heat a body when absorbed by it, ranging from about 100nm to 100,000nm. In general, the higher the temperature of a body, the lower the average wavelength of the radiation it emits.

The range of terrestrial temperatures experienced within the built environment is relatively small, and relative to the temperature of the sun this range is ‘cold’ and so radiating at a ‘long’ wavelength compared to the sun. This anomaly allows us to categorise thermal radiation as short-wave solar radiation and terrestrial or long wave infra-red radiation. 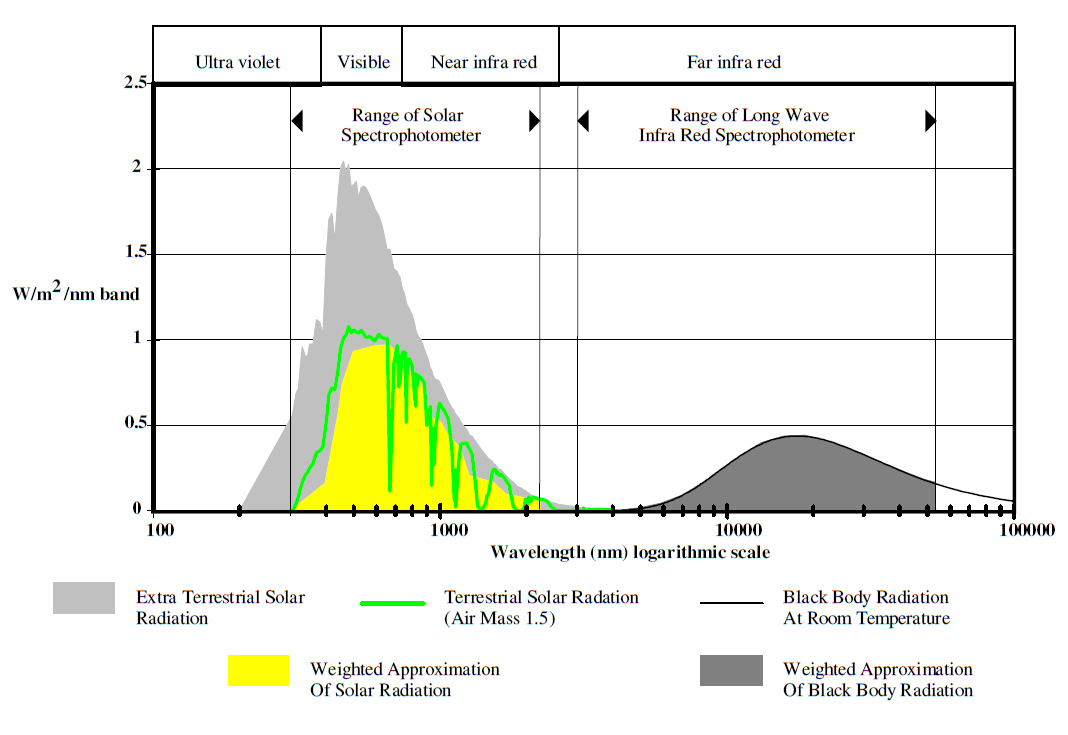 Solar radiation may be considered to include the ultra violet, visible and near or short wave infra-red wavebands. Around 97% of the solar radiation incident upon the earth's surface is within the range 300 to 2,300nm. Its spectral profile is roughly analogous to that of a black body at 5762°K, and as terrestrial temperatures are unlikely to reach anything like this temperature, solar radiation reaching the earth may be treated as a pure thermal gain.

Most 'terrestrial' radiation occurs within the far or long wave infra-red wavebands. The wavelength of terrestrial radiation varies with temperature, however at room temperature approximately 97% of the radiation emanating from a perfect emitter will be within the range 3,000nm to 50,000nm.

Nuclear radiation (also called ionising radiation) is energy released as high-speed charged particles or electromagnetic waves. Radiation can come from many sources, both natural and manufactured. All living things are constantly exposed to low doses of radiation from rocks, sunlight and cosmic rays. There are four major types of radiation: alpha, beta, neutrons, and electromagnetic waves such as gamma rays. There are 3 types of nuclear radiation; Alpha particles, which can only travel short distances and cannot travel through human skin, Beta particles which can penetrate through human skin, but cannot go through your body and Gamma radiation which can go all the way through the human body.

The difference between long wave infrared radiation and short wave solar radiation produces effects such as the greenhouse effect.

The way in which thermal radiation affects different materials is determined by their transmittance, reflectance and absorptance. These properties change for different wavelengths of radiation and for different angles of incidence.

Retrieved from "https://www.designingbuildings.co.uk/wiki/Radiation"
Create an article