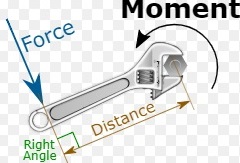 In terms of physics, a moment is the product of a physical quantity and a certain distance, and is usually defined with respect to a fixed reference point. Generally, a moment can be produced by any physical quantity that is multiplied by distance, with commonly-used quantities including force, mass, electric charge, and so on.

The moment of force that acts on an object, known as ‘torque’, is a measure of its tendency to cause the object to rotate about a specific point or axis, and is the product of the force and its distance from the point or axis.

For a moment to develop, the force must act in such a manner that the object begins (or would begin) to twist; in other words, when the force does not have an equal and opposite force directly along the line of action. For example, if two people are stood on opposite sides of a door and both are pushing on it with an equal force then there is equilibrium. If one person stops pushing then there would be no opposing force and the person still pushing would have created a moment of force.

The fixed reference point is also known as the ‘centre of moments’. This can be the actual point about which rotation occurs due to the force, or the axis about which the force may be considered as causing rotation.

A bending moment (BM) is a measure of the bending effect that can occur when an external force is applied to a structural element. This concept is important in structural engineering as it is can be used to calculate where, and how much bending may occur when forces are applied.

Retrieved from "https://www.designingbuildings.co.uk/wiki/Moment"
Create an article