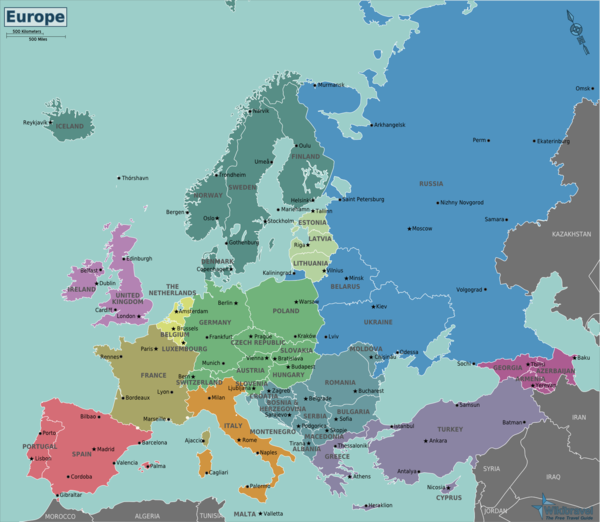 Europe is one of the world’s continents, located in the Northern Hemisphere and (mostly) in the Eastern Hemisphere. As of 2016, Europe had a total population of approximately 741 million (roughly 11% of the global population).

Europe is bordered to the north by the Arctic Ocean, to the west by the Atlantic Ocean, and to the south by the Mediterranean Sea. To the east it borders Asia, making up a landmass known as Eurasia.

In terms of politics, Europe is divided into roughly fifty sovereign states and territories:

The Council of Europe was founded in 1949 with the aim of providing unity to the continent on common goals. All states are included except Belarus, Kazakhstan and the Vatican City.

The European Economic Area (EEA) consists of the member states of the EU and the European Free Trade Association countries; Iceland, Liechtenstein and Norway.

The European Union (EU) is a partnership between 28 European countries which aims to create ‘an ever closer union between the peoples of Europe’. With the original intention of improving economic stability, the EU has subsequently expanded its role to play a significant part in many policy areas. The currency of the 19 member states that make up the Eurozone is the Euro. The Schengen Area is an arrangement among most member states that abolishes border and immigration controls with the aim of facilitating free movement of people and goods.

Among the smaller European organisations and unions are:

The Construction Products Regulation 2011 (CPR) is a European Union (EU) regulation harmonising performance information on construction products across the EU. It is made most visible by the mandatory CE marking of regulated products.

Designing Buildings Wiki has a range of articles relating to Europe, including:

Retrieved from "https://www.designingbuildings.co.uk/wiki/Europe"
Create an article