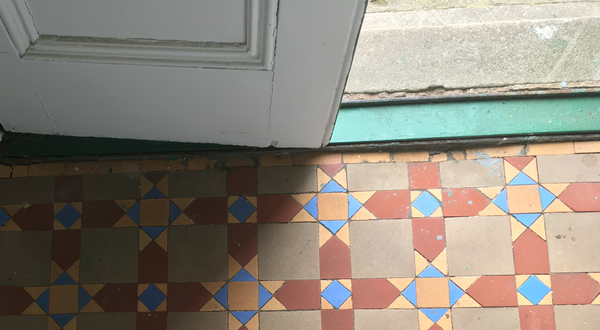 A threshold is a strip of wood, stone metal and so on that forms the bottom of a doorway, which is crossed when in entering a building or a room. It is sometimes referred to as a door sill or door saddle.

Thresholds can pose a barrier to passage for people with disabilities, and so thresholds are now typically level, rather than stepped, with a level or ramped approach. However, this can create difficulties preventing water penetration or air infiltration through a doorway from the outside, and so modern threshold designs can be complex.

An ‘accessible threshold’ is defined as a threshold that is level or, if it is raised, has a total height of not more than 15mm, a minimum number of upstands and slopes and with any upstands higher than 5mm chamfered.

Other acceptable solutions are described in ‘Accessible thresholds in new housing – Guidance for house builders and developers’, The Stationery Office Ltd. 1999.

Retrieved from "https://www.designingbuildings.co.uk/wiki/Threshold"
Create an article