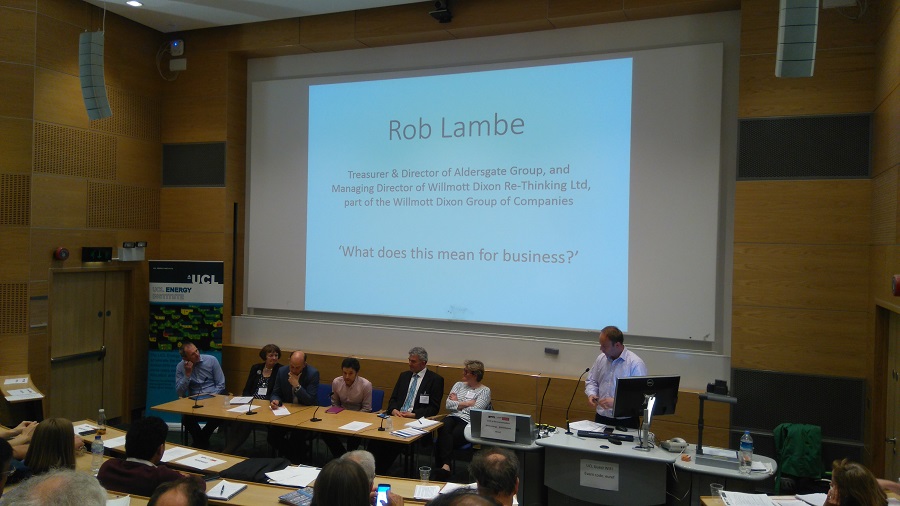 On 9 June 2016, The Edge together with UCL Energy Institute hosted a discussion about how EU membership has affected the UK and the environmental and climate change consequences of a vote to Remain or Leave. The event was intended to present facts rather than opinion, and to focus on aspects that have been overlooked in the mainstream discussions.

A panel of experts were brought together to provide some background on historical and current legislation and practices, along with an objective assessment of the different possible scenarios.

Dr Charlotte Burns, senior lecturer at the University of York, began, saying that broadly speaking the EU had been positive for the UK environment in terms of water and air quality, waste and wildlife. She argued that EU membership had prompted a shift in the style of policy towards clear, enforceable standards, as well as providing access to expertise and a platform for sharing information.

In terms of the Leave scenarios, she suggested the environmental acquis would continue to apply if Britain were to opt for a Norwegian option (membership of the European Economic Area - EEA), with the exception of bathing water, habitats and birds, the Common Agricultural Policy (CAP) and the Common Fisheries Policy (CFP). If the UK were to opt for a Free Trade approach, then the existing product standards would still have to remain in order that we could continue to trade with the EU.

Professor Janice Morphet from The Bartlett School of Planning, pointed out that it is easy to forget that projects such as Crossrail and HS2 were EU projects, capable of receiving funding of up to 60% EU funding for some aspects. In the event of Brexit, she suggested the UK would need to comply with all UN environmental agreements as well as all EU legislation if trading with Member States.

Professor Michael Grubb from the UCL Institute for Sustainable Resources, agreed that on the environment, the EU had been broadly successful. However, he proposed its record was rather more mixed in relation to climate instruments. There had been major successes, for instance around the energy efficiency of traded goods and buildings; but scandals such as the Volkswagen corruption case raised serious questions about both the balance of objectives and the independence and competence of enforcement.

Grubb also argued that continued membership was important for UK energy security. UK generating capacity is increasingly unable to meet peak demand and winter demand. The possibility of importing electricity from nearby European countries in a crisis situation is beneficial and would keep the lights on. Energy security depends upon having both the political and technical connections to achieve this.

Dr Robert Cohen, Technical director of Verco, discussed the long history of energy efficiency regulation for buildings and various EC initiatives over the past 35 years. He argued that there are problems with the formulation of the Energy Performance of Buildings Directive (EPBD) and that legislators need to be more ambitious about the scope of energy regulations to reduce energy demand. He claimed that the villains are all too often Member State governments, and ministers and officials. Although EU Director policy making is contrained by 'one size fits all' for advanced and developing economies, the benefit of Directives is they provide more certaintly than 5-year governments. He asserted that the UK's problems with energy efficient buildings are largely its own and leaving the EU would be unlikely to solve them.

Dr David Greenfield, Managing Director of Social, Environmental & Economic Solutions Ltd., spoke about EU policy and the circular economy – waste reduction, re-use and recycling in the built environment. He made the point that recycling, under EU guidance, has improved greatly in the UK over the last 13 years. The EU Circular Economy Package, currently being negotiated, is set to establish ambitious waste targets:

He also highlighted the fact that this package would develop targeted guidelines to be used on demolition sites for recovering valuable materials and the treatment of hazardous waste. He made the point that the UK is due to chair the negotiations for this package in 2017, around the time when the circular economy proposals will be being finalised. He suggested that, depending on government drive, Brexit may end up leading to less waste management regulation.

Rob Lambe, Managing Director of Willmott Dixon Re-Thinking and a member of the Aldersgate Group, argued from a business perspective. He suggested the construction industry had been the driving force, rather than government, towards the adoption of a green economy, the value of which is now 10% of all construction activity. However, he stressed the 3 "C"s - consistency, confidence and collaboration are the underpinning conditions needed by business both in generally and in order to create and sustain a green economy. He suggested that the EU helped to provide these three qualities.

Overall, the only conclusion that could be drawn from the debate was that in terms of environmental and climate change consequences for the built environment, leaving the EU would be the wrong decision to make.

Whilst several speakers did criticise EU policy and practices, it was notable that the panel did not include anyone prepared to argue in favour of leaving the EU. This suggests that few, if any, environmental experts think there is any environmental advantage to be gained by leaving the EU. The track records of national governments on environmental issues have often been patchy and even where a government has taken a positive step, that action is often undone by a successor government, or even by a successor minister. Such a stop-go approach is detrimental to creating concerted long-term actions that are needed to deliver environmental goals. As Robert Cohen reminded the audience of Lord Stern's sage words, "Climate change is a result of the greatest market failure that the world has seen", it is increasingly recognised that governance and regulation have an important role to play in delivering environmental goals. The EU approach to planning and infrastructure policy is not episodic; instead it is flow based, with long-term goals and objectives which successive instruments work toward, building upon each other.

You will be able to watch a recording of the event here.

Retrieved from "https://www.designingbuildings.co.uk/wiki/EU_Referendum_-_Environmental_and_climate_change_consequences_for_the_built_environment"
Create an article