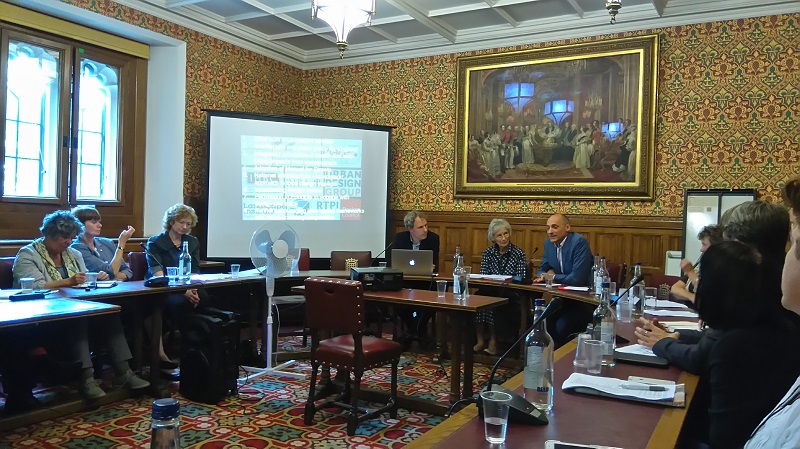 On 11th July 2016, as the soon-to-be Prime Minister Theresa May spoke outside the Palace of Westminster, Designing Buildings Wiki attended a debate in the House of Lords organised by The Edge think tank in collaboration with The Place Alliance. The topic of discussion was 'Building better places'.

In February 2016, the House of Lords Select Committee on National Policy for the Built Environment published Building Better Places, an attempt to '..identify a coherent set of responses' to the many complex challenges facing decision-makers, and 'to consider the development and implementation of national policy for the built environment'.

The chair of the debate, and select committee member, Baroness Whitaker, began by explaining that the committee included representative from all the main political parties. They took evidence from practitioners, professional bodies, developers, academics, societies, central and local government politicians and officials. They received 187 submissions of written evidence and took oral evidence from 58 witnesses in 27 evidence sessions. A response to the report was expected from government, but it was not clear when.

Professor Matthew Carmona, Professor of Planning and Urban Design at the Bartlett School of Planning, who served as the Committee's Specialist Adviser provided an overview of the key recommendations that were made in the report.

He said the aim was to move away from a deregulated, crisis-led approach to the built environment, and to provide longer-term, place-centered policy making. At the heart of the report were the following recommendations:

One of the key recommendations made by the committee was the need for a Chief Government Built Environment Adviser, responsible for promoting good practice, providing an objective sounding board for government, and reporting to Parliament. They suggested that a good model for this could be the role of the Chief Scientific Adviser.

Baroness Kay Andrews, who chaired English Heritage from 2009 to 2013 and has held a number of positions in government, spoke about how she had not been entirely persuaded by the idea of the Chief Adviser role at the outset. However, she said she had been won over by the case made in terms of providing coordination across a fragmented industry, and promoting best practice.

She suggested that such an Adviser might be able to identify overlaps and synergies, preempt and warn the government about emerging issues, provide pre- and post-legislative scrutiny, and help drive proactive policy.

She identified key areas that she felt needed to be tackled:

Ben Rogers, the Director of Centre for London, and previously part of the Cabinet Office Policy Unit, suggested that the role might be better labeled simply 'Chief Architect', to allow better public understanding. He went on to say that there was the need to put professional expertise back into the discussion in government. He also argued that it is important to encourage talented young planners to work in the public sector, “Unless we can do that we are in big trouble”, he said.

He highlighted that the new Mayor of London Sadiq Khan has been getting “encouraging noises” from the Treasury in terms of further devolution; asserting that central government would never be “joined up” on the built environment as there are too the many complex cross-cutting issues. In his view, placemaking is at the local level, however, “local towns do not have the resources they need to invest”.

Questions from the audience suggested there was broad support the report, but there was some concern that it was looking backward to a 'Blairite' agenda, rather than setting out a vision for the future. The audience also stressed the need for a Chief Government Built Environment Adviser to have sufficient 'teeth', and questioned whether any one person would have the full range of skills required.

There was general agreement that further devolution could be positive, and that neighbourhood planning was a notable success story, but that the process needed to be simplified.

Retrieved from "https://www.designingbuildings.co.uk/wiki/The_Edge_Debate_74:_Building_better_places_-_who_cares%3F"
Create an article