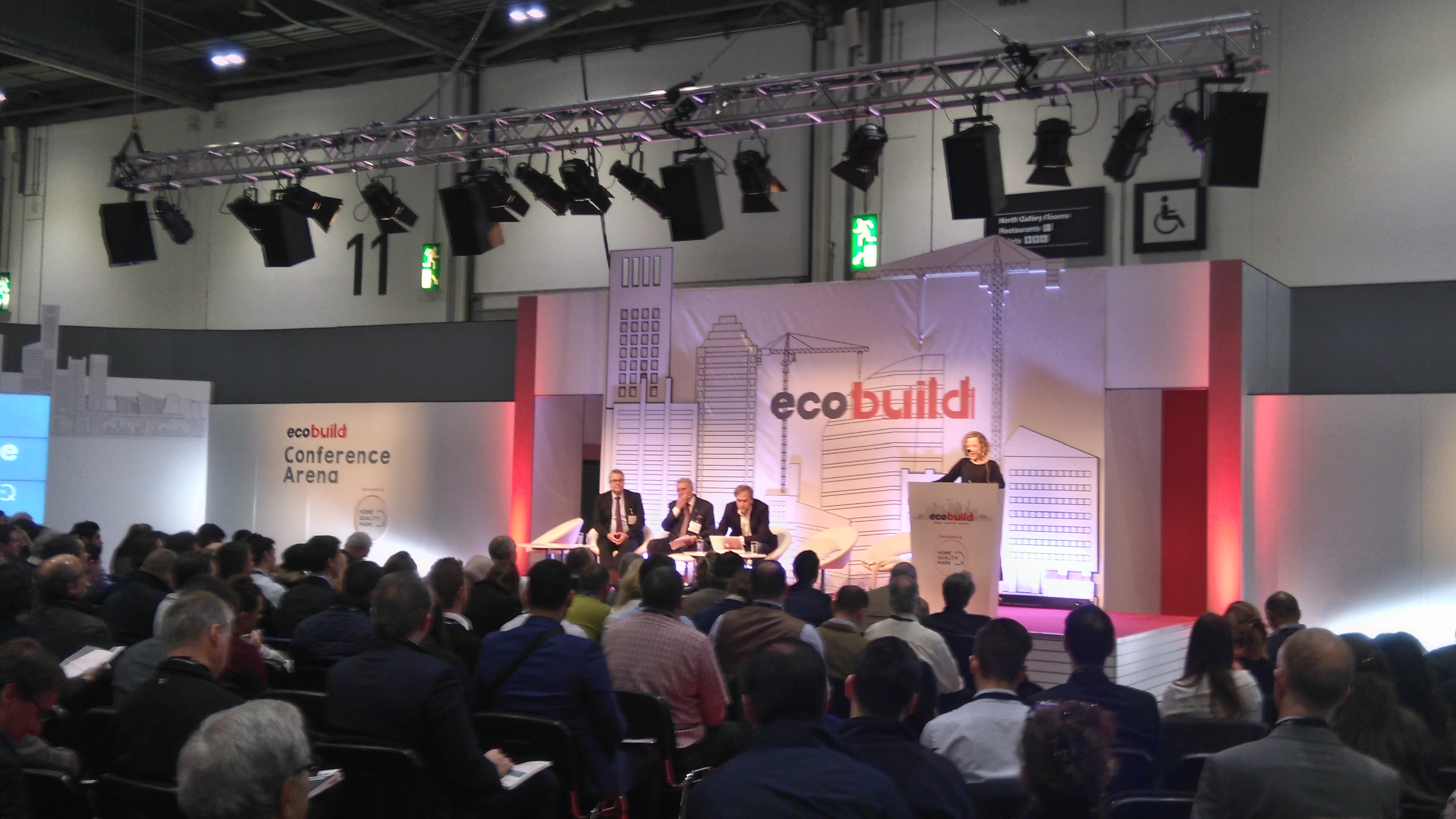 Designing Buildings Wiki went to the Excel Centre for day one of EcoBuild 2016, the UK's largest construction and energy event.

One of the main topics of discussion was housing, with the day's conference chair Cathy Newman (from Channel 4 News) opening by saying that in a time when people are living in garden sheds and the median house price is 12x the average income, the term 'housing crisis' is well justified.

On the question of 'What makes good housing?', Tony Pidgley, the Chairman of Berkeley Group, held to the mantra of 'affordability and additionality'. He said Berkeley's central focus was on the needs of inhabitants, that as stakeholders they are engaged right from the point at which each contract is won.

Rowan Moore, architecture critic for The Observer disagreed, saying that the sheer stress of numbers in a city such as London meant the quality of life for its inhabitants was constantly being squeezed.

Since people will buy anything that gives them a foothold, Moore said, planners will approve anything so they achieve the required numbers. His view was that politicians should be questioning the policies made 30-60 years ago; such as re-examining public housing, and building more on the green belt, which he argued was of precious little interest or utility to the average Londoner. If, he said, government and planners can annoy a lot of people with HS2 why can't that same sense of purpose and will go into housing policy?

David Sheridan, Chief Executive of Keepmoat, argued that providing good infrastructure is just as important as good housing, with there being no point building homes if people can't get from them to their places of work. He claimed that a big challenge for developers was having to juggle the weight of bureaucracy required whilst also being told to 'get on with it, start developing!'

He claimed that planning faces real challenges from nimbyism, stating “…we are open to too many views in this country, we should make strong decisions and stick to them”.

There was broad consensus across the panel for some kind of rent controls being introduced. Pidgely said new development projects should have the level set by government at 30% affordability, with rent linked to local salary levels.

Moore argued that the concept was hampered by poor political leadership, with current policy based on the belief that 'everyone wants to buy' which is perhaps not the case; rather that such desire is being driven by the comparative unaffordability and poor quality of the rental alternative.

Retrieved from "https://www.designingbuildings.co.uk/wiki/Ecobuild_2016_-_What_makes_good_housing%3F"
Create an article