Must cities grow to compete? 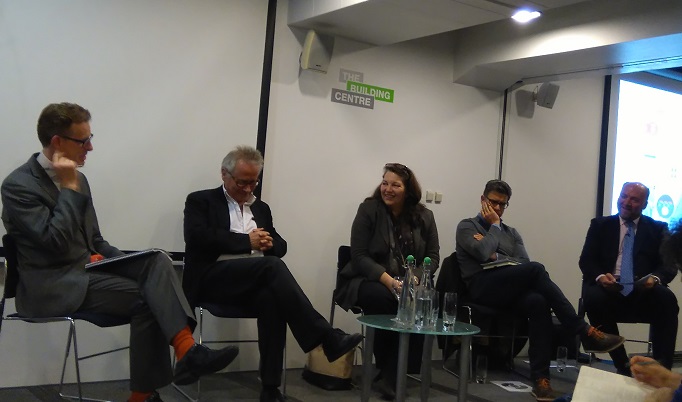 The conversation examined the relationship between infrastructure and economic and spatial growth, in terms of how a sustainable and resilient city can maintain its competitiveness, employment, transport, housing and quality of life.

The chair Dr Jim Coleman, Head of Economics at Buro Happold, began by explaining that the modern city is driven by growth and that economically resilient cities continue to be a magnet for migration, which is itself a key driver. He pointed to projections for London where top-level population estimates suggest around 13 million people by 2050, requiring a £1.3 trillion investment in infrastructure.

However, he suggested the unequal growth of modern cities might ultimately lead to their demise. For example, what happens when the people who generate the wealth of a city start to migrate to places with a better quality of life, and can we control this anyway? Or, do we simply have to learn to live with a sub-optimal or over-burdened infrastructure?

Yolande Barnes, Head of World Research at Savills, was firmly of the belief that there will need to be a “fundamental change in the way we think about what a city is”, claiming that an outdated notion of growth was not a good starting point, and rephrasing the subject of the debate as ‘what are competing cities doing that enables them to grow?’

She cited her observation that aside from the megacities – London, Tokyo, Los Angeles, and so on – other competitive cities remain comparatively small, such as Austin, Berlin, Dublin and in particular, San Francisco, which is at the heart of the digital tech world while accommodating fewer than a million people. She claimed that Asian urbanisation is very different, being highly-zoned and segmented, with the example of Kuala Lumpur, a “series of shopping malls with houses in between”.

By challenging the traditional notion of ‘the city’, she suggested that urban dispersal will become more prevalent, and that London need not be so centralised – with places like Margate becoming “almost Shoreditch-on-Sea”. She argued that in several years “we will be talking about the failure of suburbia in the same way we talked about the failure of the inner city slums”. Changing the business model for land ownership, that is currently so segmented, could, she said, facilitate the “budging up”, that is needed for greater densification.

Peter Bishop, Professor of Urban Design at The Bartlett, UCL, began by reflecting that in terms of growth, if a city is to survive is has to get certain things right – health, infrastructure, employment, and so on. Cities that fail to address their infrastructure and governance will decline. He argued that the 21st century may well see the spectre of cities that have grown significantly beginning to fail. Where cities grow based on migration rather than economic growth, such as many of the expanding Asian and African cities, there are more risks for their long-term sustainability.

Andrew Carter, Deputy Chief Executive of the Building Centre, said that for a city to be successful it must be “jam-packed with highly-skilled people” rather than just being full of people. In this respect it could still be small but be very competitive, such as Cambridge, and that it was crucial to refocus attention on productivity rather than growth.

He argued that more northern cities are struggling because of the lack of business and innovation rather than supply-side issues such as not enough affordable housing. In the short term places such as Hull are likely to shrink – “we may not be able to revolutionise them, regardless of how many misguided policy attempts are made to do so, but we can help the people adjust”. When we constrain growth, he said, we need to be mindful of the distribution of effects as the low waged/low skilled are disproportionately affected.

Nick Turner, Founder and Managing Partner of Stratforma, began by presenting figures showing that London is first for global growth, overnight visitors, global talent, and so on. However, he said the global economy and talent is shifting to the east, which is troubling investors, particularly with the uncertainty of the EU referendum.

He made the case that there needs to be improved digital connectivity, more technical talent training, and improved funding for SMEs. There are still large sections of London that are deprived and lack skills, he said before going on to describe how a large part of his role as advisor to the Mayor of London has been to reach those children and adults in deprived communities, try and ‘up-skill’ them, and make sure they are not left behind.

He said that no one had ever come to him and asked for advice on ‘how to shrink a city’. On the contrary he asserted that “growth is good!”, a point that was taken almost to be axiomatic by the panel, despite a question from Designing Buildings Wiki asking why this was so and that, on the contrary, city growth might not be entirely good, sustainable or desirable for the people living there. It was a challenge to the ‘conventional wisdom’ that could surely furnish further debate in the future.

Retrieved from "https://www.designingbuildings.co.uk/wiki/Must_cities_grow_to_compete%3F"
Create an article