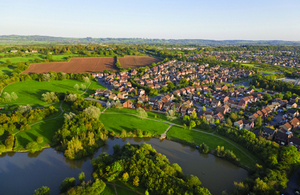 They were described in Ebenezer Howard’s 1898 publication ‘To-morrow: A Peaceful Path to Real Reform’ as having, ’...the advantages of the most energetic and active town life, with all the beauty and delight of the country...'

Howard went on to become founder of the Garden City Association (now the Town and Country Planning Association) and by 1903, land had been purchased for the first Garden City at Letchworth. This was followed in 1919 by land acquisition for the creation of Welwyn Garden City. These projects were followed by the New Towns programme in the aftermath of the Second World War, which promoted the development of larger, 'new towns' such as Milton Keynes.

The Garden City idea has remained popular, and the TCPA suggests that 21st century Garden City principles include:

The supply of new homes remains a key priority for the UK government, and in April 2014, it published the Locally-led Garden Cities prospectus (now archived) which set out a broad support package for local authorities to develop garden cities. The prospectus aimed to provide guidance for proposals which had to be locally-led, include at least 15,000 homes and be supported by existing residents.

More than £1 billion in funding was set aside between 2015 and 2020 which was hoped might deliver up to 250,000 homes. The government offered a variety of support, depending on the requirements of the local authority:

In December 2015, it was announced that two new ‘garden towns’ were being supported with £1.1 million funding. The proposals for Didcot in Oxfordshire and for North Essex was expected to provide up to 50,000 new homes by 2031. Other government-recognised ‘garden town’ projects include; Ebbsfleet in Kent, Bicester in Oxfordshire, Basingstoke and North Northants. See Garden towns for more information.

In the 2016 budget, the government announced it would legislate to make it easier for local authorities to work together to create new garden towns, as well as consult on a second wave of Compulsory Purchase Order (CPO) reforms with the objective of making the CPO process clearer, fairer and quicker. It also announced technical and financial support to areas that wanted to establish garden villages and market towns of between 1,500 to 10,000 homes.

In March 2016, the government published Locally-led garden villages, towns and cities, a prospectus inviting expressions of interest from local authorities wanting to create new communities based on garden city principles.

In February 2019, the government announced a £9 million cash injection to speed up the locally-led building of new garden towns and villages, helping get 21 sites ready for development. Ref https://www.gov.uk/government/news/cash-boost-to-help-build-200000-homes-in-new-garden-towns

Retrieved from "https://www.designingbuildings.co.uk/wiki/Garden_cities"
Create an article