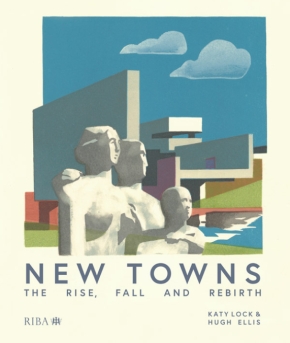 The heritage of new towns was celebrated in Context 162, which built on an increasing awareness of the importance of new towns in understanding the development of our own country and others, particularly in the years since 1945.

This book traces the history of those towns in the UK from their antecedents in the garden cities through the post-war decades. It examines their current situation and their relevance today. It is a story of innovation in planning, landscape, architecture, and cultural and community development. The authors, Katy Lock and Hugh Ellis, both work for the Town and Country Planning Association. Both are keen advocates of new towns, and the ideas and aspirations that they stood for.

Lock and Ellis are not naive about the difficulties facing new towns today. These include maintenance liabilities for extensive open-space networks, the legacy of experimental housing design (often including flat roofs) built under pressure for delivery, and a uniformly ageing population and housing stock. Managing these problems was not helped by the premature winding-up of the development corporations in the Thatcher years and asset-stripping by central government (the early new towns were highly profitable). The Cameron government brought in the infamous permitted change of use from offices to residential: the conversion of Terminus House in Harlow is rightly described as ‘a low point in English planning practice’. Similar conversions may be in prospect for Central Milton Keynes.

The central section of the book sets out eight case studies, ranging from Harlow, one of the first generation of new towns, via towns in all the UK nations, to Milton Keynes, the last, most ambitious and greatest achievement of the new town movement. Some aspects of this picture are bleak but not universally so: the book shows how the private sector, local authorities and government agencies are rediscovering echoes of the innovative spirit of the early new towns to find solutions to their present problems. The authors decry the present situation of planning: reckless deregulation, a complete lack of strategic planning, with the partial exception of the Cambridge-Milton Keynes-Oxford corridor, and the lack of direction in government.

Towards the end of the book there is a picture of Vauban in Freiburg. Vauban and Freiburg are magnificent. The energy, courage, inventiveness, and ability to meet present and future needs evident there are qualities that not so long ago we used to have in the UK. We could confidently plan and build Milton Keynes, and other countries used to look to us for inspiration. Now we have no example of a city comparable with Freiburg that meets the particular challenges of the 21st century with such ambition, creating beautiful places in the process. We elect governments that believe that the best results come from a hands-off approach, but there is a glimmer of hope in that the achievements of Freiburg had their origins in community activism rather than waiting for top-down action by government.

It is a pity that this book is spoilt by patchy proof-reading. New Towns is an excellent and well-illustrated primer to the history of the new towns movement and to its relevance today. Lock and Ellis are straightforward in highlighting current failures but positive in showcasing successes.

Lewis Silkin may have been too ambitious in 1946 in anticipating that the new towns would produce a ‘new type of citizen’. No politician would say that now, but books like New Towns can at least keep the memory of that boldness of aspiration on life support, perhaps to reawaken one day.

This article originally appeared as ‘A glimpse of the possible’ in Context 165, published by The Institute of Historic Building Conservation in August 2020. It was written by Michael Taylor, editorial coordinator for Context.

Retrieved from "https://www.designingbuildings.co.uk/wiki/New_Towns:_the_rise,_fall_and_rebirth"
Create an article