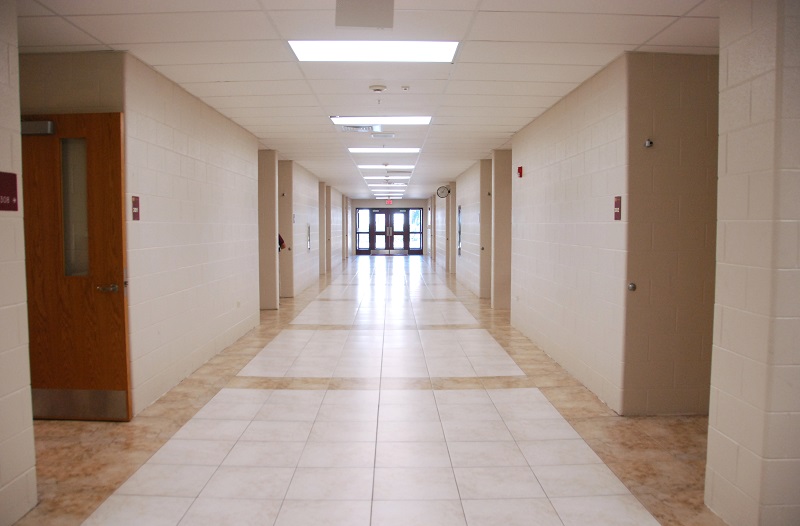 A corridor is a form of hallway or gallery which is typically narrow in comparison to its lenght and acts as a passage connecting different parts of a building. A corridor often has entry points to rooms along it.

Despite being a normal feature of many modern buildings, corridors did not become common until the late-17th century, and were only first used widely in the 19th century. Prior to the use of corridors as a means of circulation, people would simply flow from one room into the next.

It has been theorised that the proliferation of corridors was driven to a certain extent by socio-economic factors and evolving moral attitudes. Corridors were a means of separating the occupants of a building, such as servants from those they served, inmates from the prison guards, workers from supervisors, and so on. They created privacy, in that it was no longer necessary to go through rooms, it was only necessary to go in to them.

Corridors also helped increase the efficiency with which people could move through buildings, while also turning rooms into a series of dead ends by separating circulation from destination.

The design of corridors is largely determined by the functions of the building. Hospital corridors will need to be wide enough to allow bi-directional flow of traffic, including beds and wheelchairs. Hotel corridors need to be robust enough for suitcase wheels, trolleys, and so on. Corridors may need access to natural light from windows, or be lit well artificially so as to avoid dark corners and allow easy circulation.

However, they can sometimes be soulless 'between' spaces, with no particular character or function, anonymous decoration, poor-quality artificial light and the feel of a prison offering nothing but a series of locked cell doors.

The world’s longest corridor is in RAF Mount Pleasant on the Falkland Islands. Nicknamed the ‘Death Star Corridor’, it is half a mile (800 m) long, and links the barracks, messes, and recreational/welfare areas of the station.

There are a number of statutory requirements for the design of corridors. Part M of the building regulations sets standards for circulation spaces so as to make them accessible, this includes required widths to allow circulation by people in wheelchairs. Part B of the building regulations sets standards for fire safety; corridors may form part of escape routes, with required minimum widths, and may be protected corridors, that is, corridors which are protected from fire in adjoining accommodation by fire-resisting construction.

The word corridor might also be used to refer to:

Retrieved from "https://www.designingbuildings.co.uk/wiki/Corridor"
Create an article