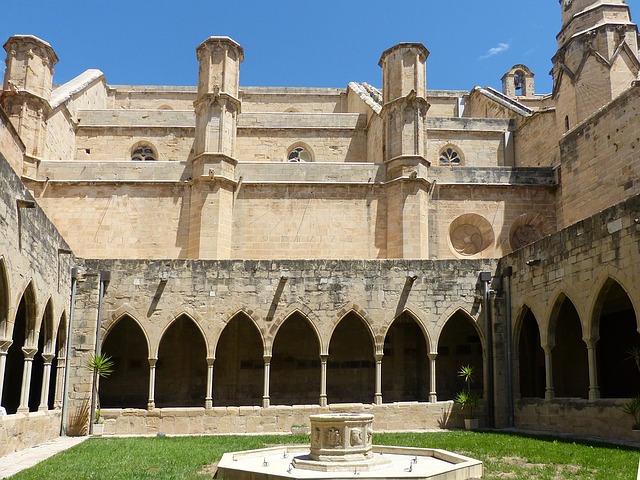 A cloister is a type of covered walkway, typically found in religious buildings such as convents, monasteries, or cathedrals. Cloisters often have a colonnade to one side, opening onto a quadrangle or garth (a cloister garden). They are also found in some colleges such as those at Oxford and Cambridge. The word cloister is derived from the Latin ‘claustrum’, meaning ‘enclosure’.

Cloisters may be formed by arcades, series of arches supported by columns or other vertical elements such as piers, first developed by the Romans, who took inspiration from ancient aqueduct designs.

In Roman architecture, they were known as a 'peristyle'. A shady roofed portico was supported by the columns or square pillars surrounding the garden. The inner walls were often decorated with landscape paintings or trompe l'oeil architecture. The courtyard often contained flowers and shrubs, fountains, benches, sculptures, and ponds.

Medieval cloisters, widely associated with monasteries, were used to separate monks from servants and workers, enabling them to live a ‘cloistered’ life, free from distraction.

Retrieved from "https://www.designingbuildings.co.uk/wiki/Cloister"
Create an article