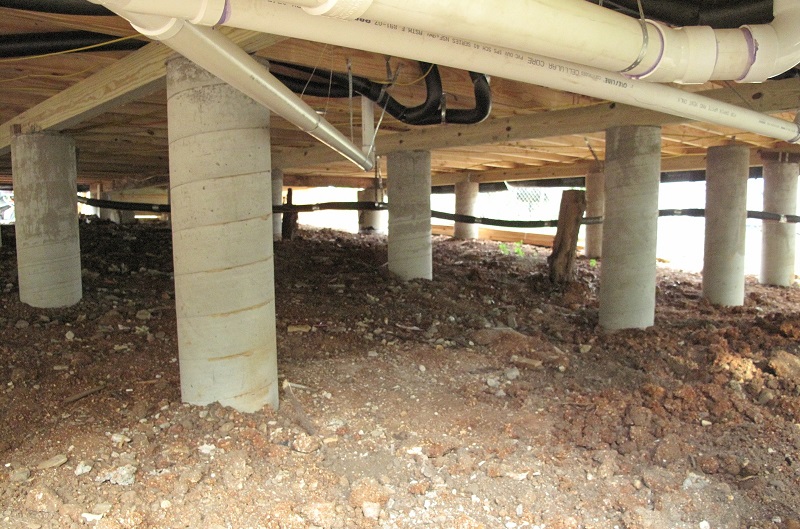 In architecture, the term ‘pier’ can be used interchangeably for several different building elements. In general, it is an upright support for a structure or superstructure, but it can also refer to the sections of load-bearing structural walls between openings and different types of column.

Piers are most commonly made of concrete, masonry or treated timber, and installed into prepared holes or shafts.

Piers can serve a similar purpose to piles, but are not installed by hammers and have the potential, if based on a stable substrate, to support a greater load. Pier shafts have been excavated with widths of more than 1.8 m and depths of more than 30 m , capable of supporting high-rise buildings.

Piers can also be used in foundations as a means of raising a structure from the ground, in particular if the structure is on a slope or near a large body of water. They differ from conventional foundations in that they support the structural load at a number of distinct points. This typically requires less excavation and soil disruption than other types of foundation.

The simplest cross-section of a pier is square or rectangular, although other shapes are common. In medieval architecture, drum piers (circular supports), cruciform piers (cross-shaped), and compound piers (combined with pilasters, columns or shafts) were common architectural elements. Compound piers were often used to form an arcade of arches, meeting the ribs descending from the vaults above.

The lower section of a pier may be widened to better distribute the downward pressure of a particularly large superstructure.

Piers used for supporting bridges are often installed in the form of caissons, which are sunk into position to the bearing stratum by excavating from the interior. For more information, see Caisson.

The term 'pier' may also be used to refer to a marine structure that projects into a body of water, supported by a series of columns, typically allowing docking of marine craft, but also used for pleasure. The open structure of piers allows water to flow underneath, in contrast to more solid wharfs or quays.

Retrieved from "https://www.designingbuildings.co.uk/wiki/Piers"
Create an article