Deep foundations are necessary where the bearing capacity of the surface soils is not adequate to support the loads imposed by a structure and so those loads need to be transferred to deeper layers with higher bearing capacity.

Raft foundations (sometimes referred to as raft footings or mat foundations) are formed by reinforced concrete slabs of uniform thickness (typically 150 mm to 300 mm) that cover a wide area, often the entire footprint of a building. They spread the load imposed by a number of columns or walls over the area of foundation, and can be considered to ‘float’ on the ground as a raft floats on water.

They are suitable where:

Raft foundations can be fast and inexpensive to construct, as they tend not to require deep excavations compared to strip or pad foundations and they may use less material as they combine the foundation with the ground slab. However, they tend to be less effective where structural loads are focussed on in a few concentrated areas, and they can be prone to erosion at their edges.

They are generally constructed on a compacted hardcore base (perhaps 100 mm thick). A layer of blinding concrete may then be laid to allow formation of the raft (typically 50 mm) with a waterproof membrane above.

The concrete raft tends to include steel reinforcement to prevent cracking, and may incorporate stiffening beams or thickened areas to provide additional support for specific loads, for example, below internal walls or columns (which may require punching shear reinforcement). Beams may stand proud of the raft, either above or below it, or may be 'hidden' beams, formed by reinforced areas within the depth of the raft itself. These thickened areas are particularly useful where there are poor ground conditions, as the required thickness of the raft itself might otherwise be uneconomic.

Typically, a thickened reinforced area is created at the perimeter of the raft to form an edge beam supporting the external walls of the building. A concrete toe often supports the external leaf of the wall.

Insulation will generally be laid on top of the raft, with a concrete floor, or raised floor above.

Drainage may be required in some circumstances under raft foundations, and geotextile barriers may be required to prevent free-draining materials from becoming clogged up by the surrounding soil.

Types of raft foundation include: 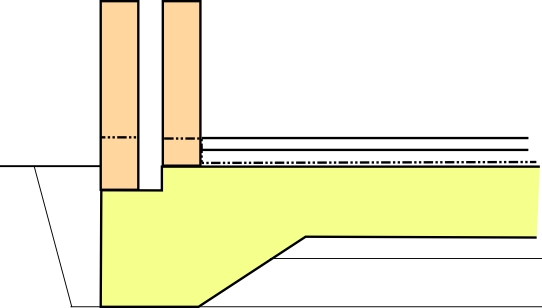 The design of raft foundations involves a number of disciplines, as consideration must be given not only to the structure itself, but also to; integration other constructions (such as external walls), insulation, damp proofing and complex ground conditions such as the presence of groundwater, trees or contamination.

Where soil is compressible, a raft foundation may be formed as a compensated foundation. In this case, the raft slab is provided to a depth that the weight of the excavated soil is equal to the raft slab weight plus that of the structure to be supported. This can be appropriate when constructing buildings on soft clay or loose sand, as settlement can be significantly reduced.

Retrieved from "https://www.designingbuildings.co.uk/wiki/Raft_foundation"
Create an article