In their normal form, raft foundations (sometimes referred to as mat foundations) are shallow foundations formed by a reinforced concrete slab of uniform thickness (typically 150-300 mm) covering a wide area, often the entire footprint of a building. This 'raft' spreads the load imposed by a number of columns or walls over the area of foundation, and can be considered to ‘float’ on the ground as a raft floats on water.

However, where a conventional raft foundation does not provide adequate support, it can be enhanced by the addition of piles, creating what is known as a piled raft foundation. 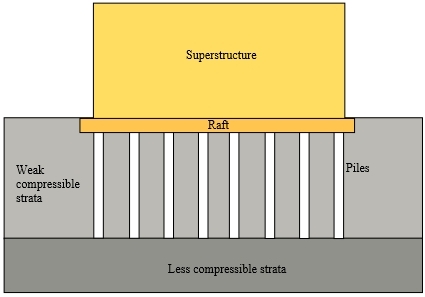 Piles are deep foundations. They are formed by long, slender, columnar elements typically made from steel or reinforced concrete. A foundation is described as 'piled' when its depth is more than three times its breadth (Atkinson, 2007). Pile foundations can help transfer loads through weak, compressible strata or water onto stronger, more compact, less compressible and stiffer soil or rock at depth.

The addition of piles to a raft increases the effective size of a foundation and can help resist horizontal loads. This can improve the performance of the foundation in reducing the amount of settlement and differential settlement, as well as improving the ultimate load capacity.

Piled raft foundations are typically used for large structures, and in situations where soil is not suitable to prevent excessive settlement. They are an increasingly popular choice for high-rise buildings.

During the design process, the optimum number and position of piles, as well as their diameter, reinforcement and length, is determined to ensure the stability of the structure while providing an economical solution, with the raft and piles acting together to ensure the required settlement is not exceeded. Typically, the piles provide most of the stiffness while the raft provides additional capacity at the ultimate loading.

If there are one or more ineffective piles, the raft can allow some degree of load redistribution to other piles, reducing the influence of the pile’s weakness on the overall performance of the foundation.

In an Unconnected Piled Raft Foundation (UCPRF), the piles are not directly connected to the raft, but are separated from it be a structural fill 'cushion' (such as a compacted a sand-gravel mixture or compacted soil) which redistributes load between the raft and piles. This can be a more efficient, and so economic solution.

Retrieved from "https://www.designingbuildings.co.uk/wiki/Piled_raft_foundation"
Create an article