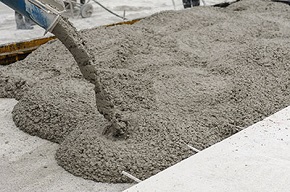 Concrete is the most commonly used man-made material on earth. It is an important construction material used extensively in buildings, bridges, roads and dams. Its uses range from structural applications, to paviours, kerbs, pipes and drains.

Concrete is a composite material, consisting mainly of Portland cement, water and aggregate (gravel, sand or rock). When these materials are mixed together, they form a workable paste which then gradually hardens over time.

For the different types, see Types of concrete.

A material similar to concrete was first developed by the Egyptians, consisting of lime and gypsum. Typically, lime, chalk or oyster shells continued being used as the cement forming agent until the early-1800s.

In 1824, Portland cement, a mixture of limestone and clay was burned and ground, and since then, this has remained the predominant cementing agent used in concrete production.

There are numerous positive aspects of concrete:

The limitations of concrete include:

The characteristics of concrete are determined by the aggregate or cement used, or by the method that is used to produce it. The water-to-cement ratio is the determining factor in ordinary structural concrete with a lower water content resulting in a stronger concrete.

This, however, reduces the workability (and pumpability) of the concrete, which can be measured using the slump test. The grading, shape, texture and proportion of aggregate can also have a similar affect. If a particularly strong concrete is required, the amount of aggregate can be reduced in relation to the cement. However, cement is a significant cost factor, and increasing its proportion in the mix will increase the overall price.

For more information, see The properties of concrete.

Concrete strength is determined by the force required to crush it and is measured in pounds per square inch or kilograms per square centimetre. Strength can be affected by many variables including moisture and temperature.

The tensile strength of concrete can be improved with the addition of metal rods, wires, cables or mesh. Where very high tensile stresses are expected (such as in wide unsupported spans in roofs or bridges) concrete can include pre-tensioned steel wires. This creates compressive forces in the concrete that help offset the tensile forces that the structure is subject to.

Sacrificial probes can be integrated within concrete to provide strength determination and this is likely to help improve construction methodologies.

Formwork is a temporary mould into which concrete is poured and formed. Traditional formwork is fabricated using timber, but it can also be constructed from steel, glass fibre reinforced plastics and other materials.

Formwork may be; temporary, re-usable, or stay-in-place. There are also a number of proprietary systems such as those used to support vertical formwork while concrete cures, consisting of a series of tubes and ties.

Efficiency within concrete construction is being improved by the adoption of hybrid solutions and innovations in formwork such as self-climbing forms.

Concrete has a relatively high embodied energy, resulting from its extraction, manufacture and transportation. Waste materials can be included within the concrete mix such as Recycled Crushed Aggregate (RCA), Ground Granulated Blast-Furnace Slag (GGBS) and Pulverised Fuel Ash (PFA).

In addition, moves are being made to assess the potential of using recycled concrete, however, issues such as moisture content and material variability may make this unviable.

Concrete is a very durable, low maintenance material and can provide thermal mass, helping reduce the energy consumption of buildings in operation.