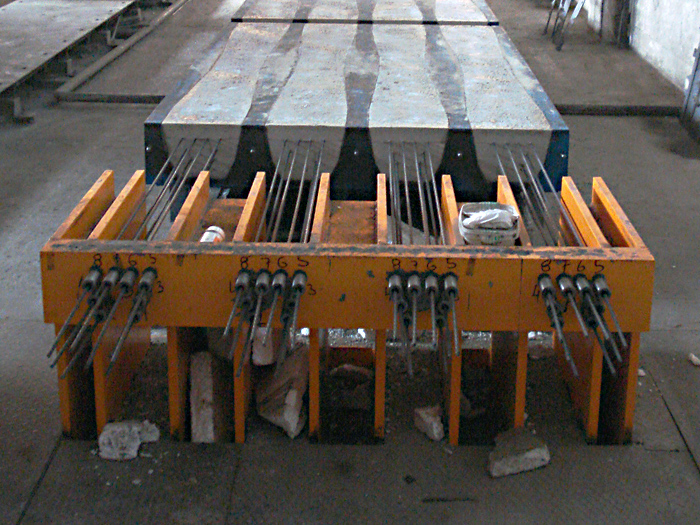 Prestressed concrete is a structural material that allows for predetermined, engineering stresses to be placed in members to counteract the stresses that occur when they are subject to loading. It combines the high strength compressive properties of concrete with the high tensile strength of steel.

In ordinary reinforced concrete, stresses are carried by the steel reinforcement, whereas prestressed concrete supports the load by induced stresses throughout the entire structural element. This makes it more resistant to shock and vibration than ordinary concrete, and able to form long, thin structures with much smaller sectional areas to support equivalent loads.

It is now commonly used for floor beams, piles and railways sleepers, as well as structures such as bridges, water tanks, roofs and runways. Generally, prestressed concrete is not necessary for columns and walls, however, it can be used economically for tall columns and high retaining walls with high bending stresses.

As a general rule, traditional reinforced concrete is the most economic method for a span of up to 6 m. Prestressed concrete is more economical when spans are over 9 m. Between 6 and 9 m, the two options must be considered according to the particular requirements as to which is the most suitable option.

Steel used for prestressing may be in the form of wire or tendons that can be grouped to form cables. Solid bars may also be used.

Wire is made by cold-drawing a high carbon steel rod through a series of reducing dies. The wire diameter typically ranges from 3-7 mm and may be round, crimped or indented to give it better bond strength. Another form of tendon is strand which consists of a straight core wire around which is wound in helixes around further wires to give formats such as 7 wire (6 over 1) and 19 wire (9 over 9 over 1). Similar to wire tendons, strand can be used individually or in groups to form cables.

The process of prestressed concrete can be either through pre-tensioning or post-tensioning.

This process involves the stressing of wires or cables by anchoring them at the end of a metal form, which may be up to 120 m in length. Hydraulic jacks stress the wire as required, often adding 10% to accommodate creep and other pre-stress losses that may be incurred. Side moulds are then fixed and the concrete placed around the tensioned wires. The concrete hardens and shrinks, gripping the steel along its length, transferring the tension from the jacks to exert a compressive force in the concrete.

Once the concrete has reached the desired strength, the tensioned wires are released from the jacks. A typical concrete strength of 28 N/mm2 can be achieved by 24-hour steam curing, as well as using additives.

To create shorter members, dividing plates can be placed at any point along the member which, when removed, permit the cutting of the wires.

This follows the reverse method to pre-tensioning, whereby the concrete member is cast and the prestressing occurs after the concrete is hardened. This method is often used where stressing is to be carried out on site after casting an insitu component or where a series of precast concrete units are to be joined together to form the required member.

The wires, cables or bars may be positioned in the unit before concreting, but bonding to the concrete is prevented by using a flexible duct or rubber sheath which is deflated and removed when the concrete has hardened.

Stressing is carried out after the concrete has been cured by means of hydraulic jacks operating from one or both ends of the member. Due to the high local stresses at the anchorage positions it is common for a helical (spiral) reinforcement to be included in the design. When the required stress has been reached, the wire or cables are anchored to maintain the prestress. The ends of the unit are sealed with cement mortar to prevent corrosion due to any entrapped moisture and to assist in stress distribution.

Anchorages used in post-tensioning depend on whether the tendons are to be stressed individually or as a group. Most systems use a form of split cone wedges or jaws which act against a form of bearing or pressure plate. 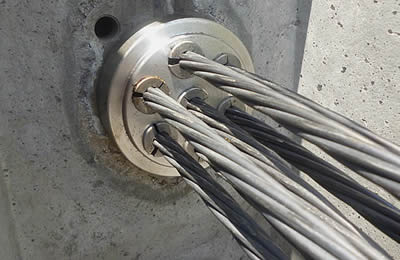 There are many different post-tensioning systems. For example, the Freyssinet system enables the stressing strands to be tensioned simultaneously using centre hole tensioning jacks, anchored by tapered jaws. This is suitable for pre-stressing elements up to 50 m in length.

The Macalloy system on the other hand, involves applying stress to the concrete by means of a solid bar, usually with a diameter of 25-75 mm. The bar is anchored at each end by a special nut which bears against an end plate to distribute the load.

The advantages of prestressed concrete include:

The disadvantages of prestressed concrete include:

Up till now almost all post tension tendon inspections continue to be manual and subjective in nature with very little quantitative data. Infrastructure Preservation Corporation’s has developed TendonScan®. TendonScan® is a post tension tendon service that is composed of two services. One that utilizes advanced magnetic flux leakage nondestructive testing technology and one that utilizes magnetic flux leakage combined with robotics and interpretation software to peer through an external post tension tendon and provide the asset manager with an advanced condition assessment report to help budget for maintenance.