Bridges are a common feature of the built environment and one of the key elements of civil engineering. The basic principles of bridge design are dependent on the load-bearing structure; whether flat, convex or concave. These are better known as beam, arch or suspension bridges: 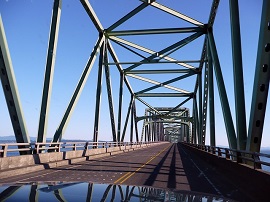 Arch bridges consist of a load-bearing arch in a state of compression, the strength and stability of which allows them to carry greater loads than beam bridges. The arch can support the horizontal deck of the bridge either from above or below. 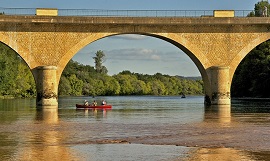 Suspension bridges consist of towers secured by cables that suspend the central structural span or deck. The tower foundations may be constructed using caisson or cofferdam techniques, whilst the cable anchorages can be secured through anchorage tunnels to suitable ground on either end of the bridge. 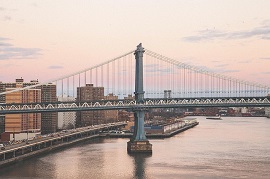 From these three basic options, a very wide range of designs are possible. The choice of bridge design will be determined by the height, ground conditions and the clear span required.

Traditionally, steel construction has been most commonly used for very long spans, however, concrete arches are now also being used for big bridges. For large single-spans bridges, suspension bridges are the most common, with the high-tensile strength of the steel cables providing a design solution that is very economical compared to other support options.

Where there are suitable support points available, multi-span bridges may be used to create long bridges, and these may include combinations of beam, arch and suspension spans.

Movable bridges are moveable variations of the three basic forms, generally used in situations where greater headroom under the bridge is sometimes necessary, for example to allow the passage of a ship underneath. The most common types of moveable bridge are:

There are a very wide range of construction methods available, however, bridge foundations constructed in water will usually involve the use of cofferdams or caissons. Foundations on land may be piled, often capped off to receive a pier foundation.

Piers will generally be constructed above the foundations, and then beams or girders lifted on to them by crane which can either be erected on falsework around the pier or from ground level. After the main girders have been placed, the bridge deck can be positioned or cast in situ.

If the bridge is to span water, barges or pontoons may be used to float materials out to the lifting position. A temporary system of trestles may be used as a means of placing the beams or girders. For bridges spanning high drops, plate-girders or trussed-girders may be hauled across the opening using rollers. Alternatively, cantilever launching may be used, where the beam is launched from one bank, with sufficient ballast to counteract the overturning force, and hauled across the span using a winch.

The construction methods for arch bridges typically include:

Where the spans are very large, the arch may be cantilevered in sections using a creeping crane that is mounted on top of the arch. The crane lifts rib sections from barges or pontoons below. The bridge deck is then constructed from both ends, meeting in the middle.

The anchorage foundations are usually constructed deep into a hillside on both banks. The towers are typically constructed using steel or in situ concrete, built on large concrete bases. Cable housings generally take the form of massive concrete blocks either positioned in water at either bank or cast deep into the bank itself.

Multi-strands of high tensile wire are used to build up the suspension cables, which are then carried between anchorage points by means of a grooved wheel.

The deck can may be erected either by lifting sections from pontoons below or by cantilevering sections out from each end.

Bridge bearings provide a resting surface between supporting piers and the deck. They act to reduce the stresses that are involved by allowing controlled movement. They are usually made of metal or flexible materials such as rubber or plastic laminates.

Expansion joints can be formed to accommodate movement in the bridge deck. The most common types are:

Bolted to the concrete or steel deck at intervals that allow maximum expansion.

Buried joints with a strip of surfacing over the joint to accommodate movement. These are inexpensive and quick to install, although their life-span is variable.

Elastomer reinforced with metal plates on both sides of the joint.

Early suspension bridges were susceptible to vibration when an external periodic frequency matched the bridge's natural structural frequency. This could cause it to become structurally unstable and ultimately could cause catastrophic collapse.

Famously, this is why marching soldiers 'broke step' as they crossed certain bridges. Broughton Suspension Bridge collapsed in 1831, and more recently, Tacoma Narrows Bridge collapsed in 1940. Whilst modern suspension bridge design should eliminate such instability, in 2000, the Millennium Bridge in London began to vibrate when large crowds walked across it on its opening. It had to be closed for a year whilst dampeners were designed and installed.

In 2007, an eight-lane, steel-truss-arch bridge across the Mississippi River collapsed killing 13 people. Subsequently, a 2016 report by the American Road & Transportation Builders Association (ARBTA) suggested that almost 10% of America's bridges were in need of repair, that is, they achieved a score of four or less out of nine, when assessed by federal engineers.

In 2018, the Morandi motorway bridge in Genoa collapsed during a rainstorm killing over 40 people. For more information, see Genoa bridge collapse.

Read about the most iconic bridges in the world here.

Retrieved from "https://www.designingbuildings.co.uk/wiki/Bridge_construction"
Create an article