The Chesapeake Bay Bridge-Tunnel is a 28.4 km (17.6-mile) structure situated on the East Coast of the United States. The Bridge-Tunnel (also referred to as a ‘Brunnel’) spans one of the points where the Chesapeake Bay reaches the Atlantic Ocean. It connects the state of Virginia with the state of Delaware and reduces 95 miles of travel distance between two densely populated parts of the East Coast.

Up until 2018, the Chesapeake Bay Bridge-Tunnel was the longest of its kind in the world. However, that title has since been passed over to the Hong Kong-Zhuhai-Macau bridge (which is approximately 41.7 km or 26 miles).

From the 1930s up until the opening of the Bridge-Tunnel in 1964, the adjacent coasts were connected by a ferry service. However, the area was experiencing an increasing amount of traffic at the time due to significant growth, and the ferries were considered time consuming and impractical for the long-term needs of the population.

The decision to opt for a Bridge-Tunnel was based on several factors. First, the waterway was located in the middle of two major Atlantic shipping channels. Second, it was an important access route for a large, nearby Naval base. A bridge was originally proposed for the area, but it was thought to be too vulnerable to possible disruptive behaviour (in the form of deliberate destruction designed to harm Naval traffic and other shipping activity).

When the Chesapeake Bay-Bridge Tunnel opened in 1964, it was considered one of the modern engineering marvels of the world. In 1965 it was named the Outstanding Civil Engineering Achievement of the Year by the American Society of Civil Engineers.

Finance was raised through bonds and private investments - no tax dollars were used. Construction began in 1964 and took 42 months.

Construction for the tunnels was based on techniques developed by Ole Knutsen Singstad (a Norweigan-American civil engineer who was also responsible for the ventilation system used in New York’s Holland Tunnel and many others). This technique (known as an immersed tube tunnel) required the creation of large ditches for sections of the tunnel; barges then lowered pre-fabricated tunnel sections which were filled with water to bring them down into place. At this point, underwater construction crews joined the sections together and the water was pumped out. Finally, the sections were buried.

The Bridge-Tunnel became insufficient for growing demand as the area was more widely developed. By 1989, officials decided a parallel structure composed of bridges and trestles would be required to accommodate both road and waterway traffic. The first expansion was completed in 1999 (ahead of the original 2000 deadline) and doubled the capacity of the bridge portion of the structure. A parallel tunnel was approved as part of a second expansion in 2013. 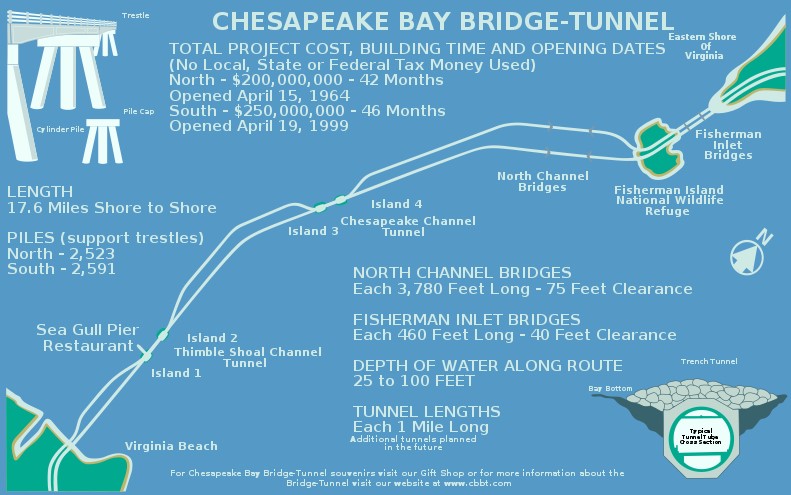 This informational sign is located at the rest area and visitors' centre on the South (Thimble Shoals) Island. This picture is current as of 31 March 2005.

As of 2020, the structures combine two tunnels, four artificial islands and four bridges and include lengthy causeways at both approaches. Bridges make up the majority of the length of the structure, which sits just above the surface of the water. The tunnel portions are strategically situated so ships can pass through the area efficiently.

Final technical and price proposals for the second expansion were released in 2016. Unlike the first tunnel, the new tunnel (named the Parallel Thimble Shoal Tunnel project) will created through the use of a tunnel boring machine (TBM).

The boring process for the construction began in 2017. It is estimated that the Tunnel Boring Machine (TBM) will remove approximately 500,000 cubic yards of soil in the process and the tunnel will consist of roughly 9,000 sections of concrete. The TBM will be used to add the concrete sections, which are being moved into the tunnel one at a time on mine cars.

When completed, the new project will double the capacity of the tunnels, with the original structures dedicated to northbound traffic and the new tunnel carrying southbound traffic. This second phase is scheduled for a tentative 2024 completion date.

A third expansion project - which would convert the entire structure into a four-lane highway from one end to the other - is scheduled to begin in 2035.

The original construction process was considered risky back in the 1960s. The dangerous project took the lives of seven workers and has continued to create hazards in the area, although, fortunately, none of these subsequent accidents have been fatal:

There have been several other barge collisions over the years, but none of the repairs required closure for more than a few hours.

Retrieved from "https://www.designingbuildings.co.uk/wiki/Chesapeake_Bay_Bridge-Tunnel"
Create an article