Tunnels of the world 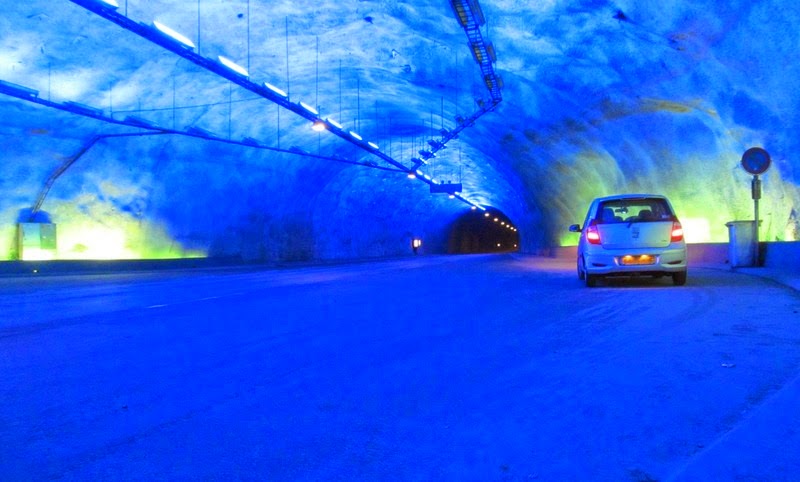 The Channel Tunnel carries high-speed Eurostar trains beneath the English Channel to and from Folkestone in Kent, UK and Pas-de-Calais in France. The tunnel’s total length is 31.4 miles (50.5 km), with 23.5 miles (37.9 km) undersea, making it the longest undersea tunnel in the world.

Whilst the original idea was proposed as far back as 1802, it was only in June 1988 that the first tunnelling work began, and it was formally opened in May 1994.

The Laerdal Tunnel (see top image) is a road tunnel connecting Laerdal and Aurland in West Norway. At 15.23 miles (24.51 km), it is the longest road tunnel in the world. Work began in 1995, and involved tunnelling through a mountain range. It was completed in 2000.

The project was innovative in the way that engineers sought to alleviate the psychological strain of driving for 20 minutes through a tunnel. It is lit with white and yellow lights to give the impression of sunrise, together with three large cave sections that allow for rest breaks and to give the illusion that drivers are travelling through a number of smaller tunnels.

The Aqua Line crosses Tokyo Bay connecting the cities of Kawasaki and Kisarazu. With an overall length of 14 km (8.7 miles) it incorporates a 4.4 km section of steel box girder bridge with orthotropic deck and a 9.6 km section of underwater bored shield tunnel. Where the bridge and tunnel intersect there is an artificial island that serves as a rest area for drivers.

After 23 years of planning, the Aqua Line opened in December 1997, setting a precedent for constructing two-lane road tunnels. It was designed with earthquake resilience in mind, as was demonstrated in a 2011 earthquake that caused severe damage to Tokyo Bay.

The Eisenhower Tunnel is a twin-bore tunnel under the Continental Divide in the Rocky Mountains. Though the project was only supposed to take 3 years to complete, complications arose when the boring machines could not work to their usual productivity level at such high elevations. When completed in 1979 it became the highest road tunnel in the world, at 3,401 m (11,158 ft) above sea level. The length of the tunnel is 1.7 miles (2.72 km).

The ‘Stormwater Management and Road Tunnel’ is the second longest stormwater tunnel in Asia, at 6 miles (9.7 km). The main purpose of the tunnel is to alleviate the problem of Kuala Lumpur’s flash flooding, by allowing storm water to flood the tunnel, as well as serving as a road to reduce rush hour traffic congestion. The rainwater is diverted into a lower channel, whilst road traffic travels along the upper level. Automated water-tight gates are opened and closed to allow the flood waters to pass through.

At 14.2 miles (23 km) long and 140 m (460 ft), the Seikan is the longest and deepest rail tunnel in the world. It spans the Tsugaru Strait that connects the islands of Honshu and Hokkaido, a risky journey by water due to the unpredictable weather such that an underground tunnel had long been an aspiration. The double track rail tunnel allows an operating speed of 140 km/h (85 mph).

The rock and soil under the strait made it impossible to use a tunnel boring machine, so dynamite and drills had to be used to blast out more than 30 miles of the tunnel, a considerable engineering feat especially since it was achieved through a known earthquake zone.

The excavation method of TBM + Conveyor is the most efficient way for long and wide tunnels.

A vertical conveyor for deep shaft to lift mucks to ground is safer and quicker.