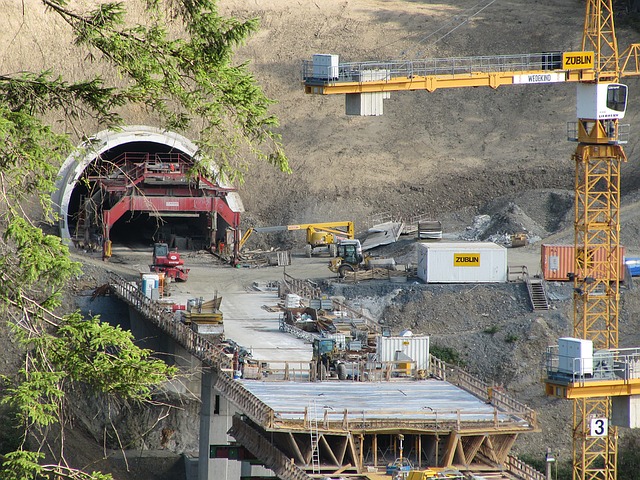 NB The spelling ‘tunneling’ tends to be used in the USA, whereas ‘tunnelling’ is used elsewhere, such as in the UK.

Tunnels are civil engineering structures that create an underground passage that may pass through a hill, under buildings or roads, under water or even under entire cities. They might be required to traverse an obstacle, create a mass transit systems, provide connections beneath the sea, accommodate pipelines, provide sewage systems and so on.

There are a wide range of methods that can used for the design and construction of tunnels, depending on the scale of the tunnel required, the specific ground and groundwater conditions, the depth, the availability of space and so on. The main considerations include:

This is mainly used for hard rock where digging is not possible, and was very common before the development of tunnel boring machines (TBM). The process tends to have a lower capital cost that the use of TBM, but is slower.

These are track-mounted excavating machines that have powerful cutting booms and are commonly used in coal mining or civil engineering works that require a range of tunnel diameters. They are relatively flexible and can be fitted with extra equipment such as gathering arms for the spoil, water jets to reduce dust, and conveyors for removing debris

Sometimes referred to as ‘cut-and-cover’, this is suitable for shallow tunnels. It involves the construction of an open trench within which the tunnel is constructed. The trench is then backfilled. Depending on the ground conditions, the side walls may be constructed before the trench is created, or after.

Cut and cover involves creating the ‘roof’ slab of the tunnel first, within a shallow trench. The trench can then be backfilled and the tunnel constructed underneath the ‘cover’. The has the advantage of releasing the site above the tunnel for other uses.

This method is suitable for tunnels that cross deep water. Prefabricated sections of either concrete or steel tunnel are lowered into a prepared trench at sea or riverbed level. The trench is then backfilled and any necessary protection constructed above.

Pipe-jacking is a trenchless technology in which a drive pit is constructed and then sections of steel or concrete tube are hydraulically jacked forward from the pit to form the tunnel lining. This is particularly suitable for installing services under canals, railway embankments and roads where it is important that there is little disturbance. Pipe jacking has been adopted widely since its first recorded use in 1892 in USA by the Northern Pacific Railroad Company. It is often preferred because of its simplicity and because it avoids settlement of ground.

This is a similar process to pipe-jacking, but a box shaped section is jacked forward rather than a pipe, and this can allow a larger tunnel to be created.

This uses a non-steerable rotating cutting head and is used mainly for conduit installation. A rail-mounted machine augers the soil as it pushes a sleeve or tube into the ground. The auger cuts the face of the borehole as it turns, transporting the excavated spoil back down the sleeve into the shaft. A length of sleeve is inserted by the machine which then withdraws to have another length of sleeve welded on and the auger flight extended. This process is then repeated.

Microtunnelling machines are primarily used to bore tunnels that are too small for operatives to enter, such as pipelines, and have been developed to be used in almost any type of ground condition. Microtunnelling machines can be controlled from ground level using laser equipment, and spoil is removed from the cutting face by an auger running through the pipeline as it is installed. This is commonly used where surface disturbance must be kept to a minimum, such as in the construction of urban drainage systems.

Kramer defines microtunnelling as ‘those methods that install pipes with a diameter of less than 36 inches (900mm) to a predetermined line and level by remotely controlling the cutting head.’(Kramer et al. 1992)

Can be used where a self-supporting subsurface material such as rock or hard clay is
present. It involves the use of drill and blast techniques or excavation/sprayed concrete lining to advance the excavation.

This technique uses purpose-designed tunnel boring machines (TBM) to excavate the full cross-section required. There are high costs involved in the purchase and maintenance of such a machine, although it requires fewer operatives and can be very time efficient. Whole face borers grip the side of the tunnel to transmit thrust forward and can cut through hard rock, with debris being removed by conveyor, but they can be inflexible in terms of changing direction or cross-section.

The lining process will vary depending on the ground conditions. Linings can be preformed segments or insitu concrete that is sprayed in position or cast in place.

In soft ground, linings must support the loads imposed by the ground as well as withstanding jacking pressures from the tunnelling equipment. Segmental cast-iron lining is commonly-used in soft ground as it is durable and has high compressive strength. Precast concrete linings are more economical, although it can be difficult to achieve water tightness.

In ground that is self-supporting, expanding tunnel linings can be used. The tunnelling shield is pushed forward leaving behind it an unsupported space. The lining, made up of precast segments, is then erected and expanded against the ground to predetermined pressure.

In hard ground, the lining can be concrete sprayed between steel ribs or onto mesh which has been fixed to the rock face.

Also known as the Sequential Excavation Method, NATM first came to prominence in the 1960s, and helped to revolutionise the tunnelling industry.

The main principle behind NATM that differs from other tunnelling methods is that it uses the inherent geological strength available in the surrounding rock mass to stabilise the tunnel and so can be less expensive. The optimal method of support is determined based on actual observed ground conditions, which gives it the moniker of a ‘design as you go’ approach. The initial ground support is provided by shotcrete in combination with fiber or welded-wire fabric reinforcement, lattice girders and ground reinforcement.

Tunnelling can be an extremely hazardous operation involving working at height, working in confined spaces, sprayed material and the operation of heavy plant. Careful risk assessment and risk management and a high level of training and supervision are required .

There are a number of safety schemes in place for personnel, and the British Tunnelling Society has produced a Code of Practice for the management of risk in tunnel works, the adoption of which may be required by insurers.

Retrieved from "https://www.designingbuildings.co.uk/wiki/Tunnelling"
Create an article