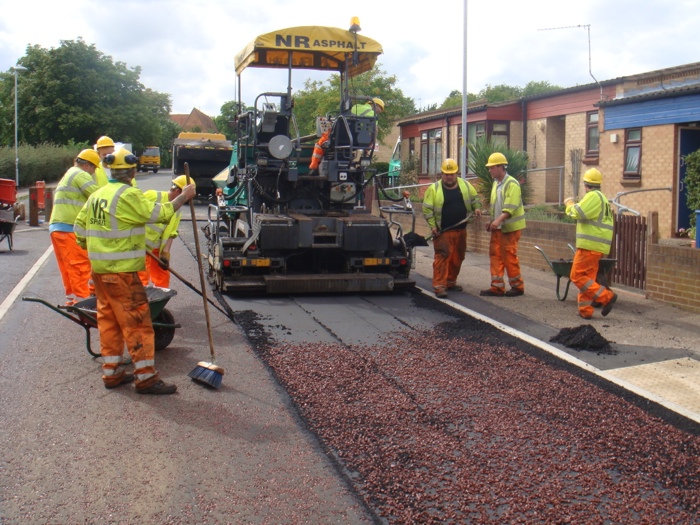 The methods of constructing roads have changed a lot since the first roads were built around 4,000 BC – made of stone and timber.

The first Roman roads were stone paved, built in North Africa and Europe for military operations. Road construction techniques were gradually improved by the study of road traffic, stone thickness, road alignment, and slope gradients, developing to use stones that were laid in a regular, compact design, and covered with smaller stones to produce a solid layer.

Modern roads tend to be constructed using asphalt and/or concrete.

Very broadly, the construction of roads can be described by three processes:

This is carried out following the dimensions specified in layout drawings.

A commonly used setting out procedure is the profile board method. A series of boards that show the exact level 1 metre above the completed construction level are placed at intervals along the proposed line of the road. A profile board with a fixed height, called the traveller, is used for controlling the excavated levels between these profile boards. By placing the traveller in the sight-line between two level boards, it can be seen whether or not the excavation has been carried out to correct levels and adjusted accordingly.

The level of each profile board is controlled using a line level which is a short spirit level hung from a nylon string. The line operator moves the string up or down until the bubble is centred.

Junctions, hammer heads, turning bays and intersecting curves are laid out in a similar manner.

Earthwork is one of the major works involved in road construction. It involves the removal of topsoil, along with any vegetation, before scraping and grading the area to the finished ‘formation level’. This is usually done using a tractor shovel, grader or bulldozer. Below the formation level, the soil is known as the ‘subgrade’. It is essential that the strength of the subgrade is tested prior to earthwork beginning.

Most earthworks are formed by cut-and-fill, and the type of ‘fill’ material must be considered, not only in terms of its physical properties, but on the conditions in which it is to be used, and the methods of compaction.

Depending on its quality, compressible subsoil may be removed or stabilised. If the cost of full or partial excavation of subsoil is uneconomical and would be likely to result in consolidation, sand wicks or sand drains may be used. Sand wicks are sand-filled boreholes beneath the road embankment that give greater stability to the soil by decreasing the length that water has to travel in a drainage path, so dissipating water pressure. Sand drains alongside the road are used to intercept ground water.

Subsoil drainage should be provided to deal with seepage through pavements and verges, from higher ground and a result of the seasonal rise and fall of the water table.

The required thickness of the pavement is determined by the subgrade strength, so it is desirable to make the subgrade as strong as possible.

The strength of the subgrade can be achieved by using the following techniques:

The subgrade strength will decrease as moisture content increases so protection may be required if it is to left exposed for any length of time.

Protection covering can be either:

Once the subgrade has been prepared and drainage or buried services installed, the paving construction can begin. Paving can be either flexible or rigid. There are pros and cons to each type, with one being selected over the other depending on the specific needs of a project.

Flexible paving consists of materials applied in layers directly over the subgrade to which the traffic loads are distributed. To prevent permanent deformation, and therefore an uneven running surface, the thicknesses of individual layers must be capable of distributing such loads. The subgrade is compacted with the sub-base on top of it. On top of this is laid the surfacing which is made up of the base layer and the wearing course.

The wearing course is the upper layer of bituminous material, often denser and stronger than the base layer. The thickness depends on the material specification and the amount of wear that is expected. Desired properties are good non-skid capabilities, minimal glare and acceptable durability.

The main materials that are used are hot rolled asphalt (HRA), dense bitumen macadam (DBM), dense tar macadam (DTM) and porous asphalt (PA). PA is especially suitable as it is an open-graded material that is designed to allow rapid drainage of surface water, thereby reducing spray as well as tyre noise.

The base will typically have a minimum thickness of 60 mm and is usually made of dense bitumen macadam or asphalt. It is laid with the appropriate crossfalls and gradients.

This is placed in a layer usually not exceeding 150 mm over the subgrade after waterproofing is complete. Various materials can be used but it is common for crushed stone or dry lean concrete (such as 1 : 15) laid and compacted by heavy rollers.

Rigid paving consists of a reinforced or unreinforced insitu concrete slab laid over a thin granular base course. The rigidity and strength of the pavement enables the loads and stresses to be distributed over a wide area of the subgrade.

Rigid paving is made up of the following layers (from bottom to top):

Longitudinal and transverse joints are required in rigid paving between the slabs, limiting the stresses applied due to subgrade restraint (friction between the pavement and subgrade), and providing room for expansion and contraction movements. The spacing of road joints is determined by: