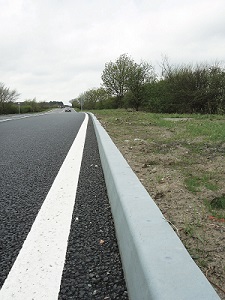 As an element of roads and highways, kerbs (kerbstone, crib-stane (Scots) or sometimes curbs (US)) serve a number of purposes:

Traditionally, natural stone was the most commonly used material for kerbs, but these have now largely been replaced by pre-cast concrete.

For most purposes, the top of the kerb should be 100 mm above the road surface. If kerbs are placed too high it can induce ‘kerb shyness’ which is where the width of the carriageway is effectively reduced.

Kerbs are typically laid on a concrete bed of at least 100 mm thickness in such a way that they are joined with the pavement. The back of the kerbing should be haunched with concrete to a thickness of at least 150 mm to provide lateral support. Kerbs can then be tapped down to the correct level. The joints between kerbs are often not mortared but instead they are laid as tight to each other as possible without risking the units spalling.

The basic kerb profiles that are used for road construction are:

Traditionally, most straight kerbs are 915 mm in length but a range of shorter lengths are also manufactured. Radius kerbs are usually 780 mm in length.

Other than those with a square profile, kerbs have a ‘watermark’ or ‘waterline’ above which the surface level and surface water is not normally expected to extend. This generally coincides with a change in angle of the kerb face. It is usual for the surface level to be kept 25 mm or more below the watermark.

Bull-nosed or chamfered kerbs are used to lower the profile of the kerb for pedestrian crossings and driveway access. Linking kerbs between two different profiles are described as transition kerbs or ‘droppers’.

Concrete kerbs can also be cast insitu with an automatic kerbing machine.

A kerb line bend is known as a radius. Sometimes a radius is laid using straight kerbs, although there are specially manufactured kerbs available that can create accurate internal (concave) or external (convex) curves. A radius is described as being either ‘fast’ or ‘slow’, with the fast radius being shorter than the slow one.

Extruded kerb edging is commonly used on long, straight roads such as motorways, dual carriageways and the highways of America and Australia. Using a laying machine, the kerb is formed of concrete or asphalt bonded to the existing asphalt surface.

Extruded concrete kerbs can be laid by a slip-form paver machine that creates the kerb as it progresses along the road. 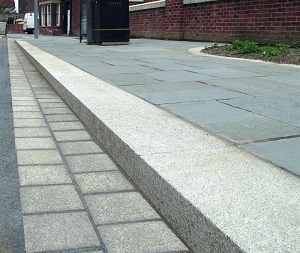 Granite is often the most popular choice, although gabbro, basalt and sandstone may also be used. Natural stone has high durability but can be expensive. Highways agencies may experience issues when trying to repair or replace natural stone kerbs that may be over 100 years old as they very often are of random sizes, whereas modern stone kerbs are formed to a standard profile and finish.

These are the most common choice for kerbing as they are strong, durable and relatively cheap. In addition, they can be manufactured to strict tolerances. 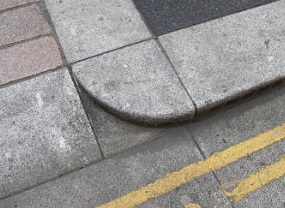 Quadrant and angle kerbs are manufactured to complement straight and radius kerbs. They come in a various of different angles and sizes. Quadrant blocks, also known as a ‘cheese’, can be cut to create angles of less than 90°.

Lightweight kerbs are easier to handle, and so there use has been encouraged for health and safety reasons. Kerb lengths are usually 450 mm, and the profile has a frog (recess) which reduces the weight of each unit. Haunch concrete fills the frog so there is no loss of performance when laid. 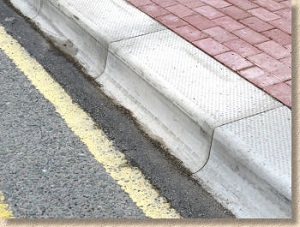 Also known as trief or titan kerbs, these are bigger than normal kerbs, usually around 450 mm in height and can weigh nearly a quarter of a tonne. Their purpose is to prevent traffic leaving the carriageway and are used on dangerous curves, for pedestrian islands, and to protect footpaths or equipment. 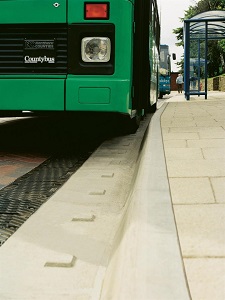 These are specially designed kerbs used at bus stops to ease passenger access. They can include a tactile feature such as a rumble strip so that the bus driver is able to assess and minimise the gap between kerb and bus door without risk of making contact with the tyres against the kerb. 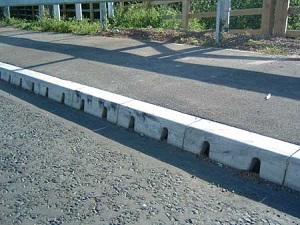 These are hollowed-out with gaping inlets on the face. Road surface water falls into the internal ‘chamber’ or ‘pipe’ and is directed to the storm water drainage system or a SUDS facility.

These are kerbs that are designed for aesthetic and decorative purposes. For example, they can be textured or feature exposed aggregate.

These ‘small unit’ kerbs are manufactured to conform with the scale and aesthetics of block paving schemes. As well as being popular on private driveways and courtyards, they are commonly found on cul-de-sacs and feeder roads on residential estates.

The second edition of The Dictionary of Urbanism by Rob Cowan, published in 2020, defines a dropped kerb/curb (UK/US): ‘A short stretch of kerb that has been lowered to allow vehicles to drive across the pavement and park in driveways which used to be front gardens; a section of kerb lowered to let people in wheelchairs or with buggies to cross the road.’

A dropper kerb/curb is: ‘The kerbstones required to create a dropped kerb.’

Retrieved from "https://www.designingbuildings.co.uk/wiki/Kerbs"
Create an article