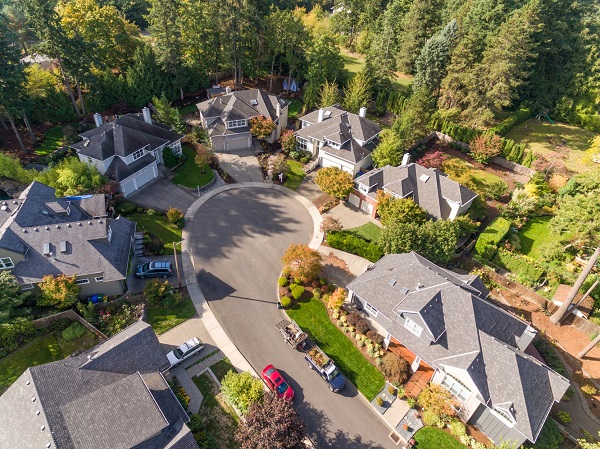 The term ‘cul-de-sac’ refers to a short, dead-end street, i.e. a road that has only one inlet and outlet. Typically, a cul-de-sac has a rounded end onto which houses face, allowing cars to move in and out, turn around, and so on. In America and Australia, it is commonly referred to as a court.

The design of cul-de-sacs dates back to Athenian and Roman times, when it developed as a defensive measure enabling foreign invaders to be trapped. The term itself is of French origin, meaning the bottom of a sack.

In England, new cul-de-sacs were banned in 1875, before being re-legalised in 1906 as part of the Hampstead Garden Suburb Act.

In 1909, Sir Raymond Unwin wrote; '...another bye-law which is not uncommon is that against roads having no through way, known as cul-de-sac roads. This action has, no doubt, been taken to avoid unwholesome yards; but for residential purposes, particularly since the development of the motor-car, the cul-de-sac roads, far from being undesirable, are especially to be desired for those who like quiet for their dwellings.'

Urban planners and designers recognised the benefits of a quiet and low traffic road for those living there, particularly families with young children who could play outside without the same safety concerns as on a thoroughfare, and the lower levels of recorded crime due to – as Jane Jacobs theorised – the ‘eyes on the street’.

Urban Design Guidelines for Victoria, published by The State of Victoria Department of Environment, Land, Water and Planning in 2017 suggests that: 'A closed cul-de-sac provides no possible passage except through the single road entry. An open cul-de-sac allows cyclists, pedestrians or other non- automotive traffic to pass through connecting paths at the cul-de-sac head.'

Retrieved from "https://www.designingbuildings.co.uk/wiki/Cul-de-sac"
Create an article