Pavegen manufactures and develops flooring technology that converts the weight of a footstep into renewable electricity. The electricity generated can be stored in batteries or used directly to power lighting, advertisement displays and signage. The technology is particularly suited to the smart city environment, where wind and solar alternatives are costly and inefficient in comparison due to limited roof space and local weather conditions. 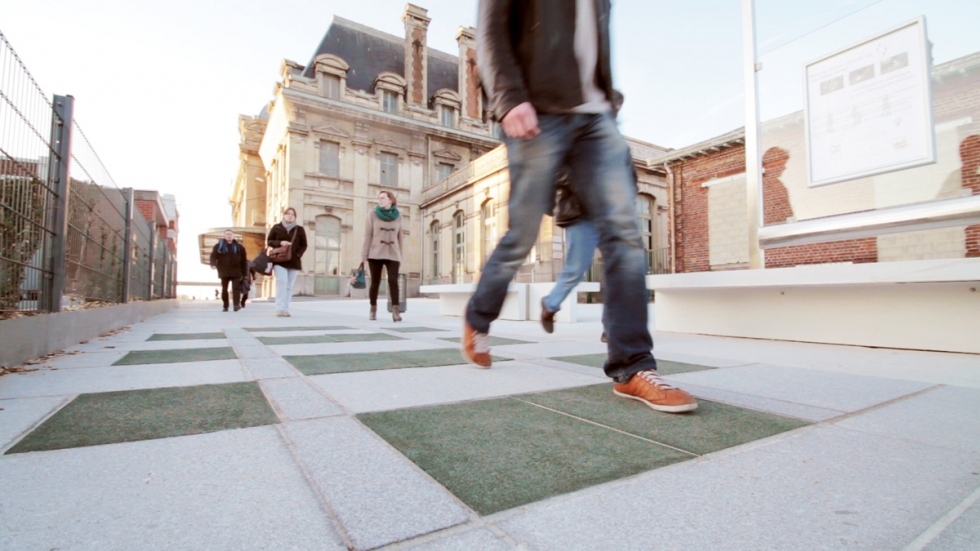 The company was founded in 2009 by Laurence Kemball-Cook. During his placement year at university, Laurence was tasked with finding an alternative source of energy that worked well in cities. Discovering that wind and solar were inefficient in this environment, he developed a new solution.

Pavegen was founded shortly after Laurence’s graduation from Loughborough University; an innovative idea that stemmed from watching commuters walk through Victoria Station one day.

Trying to get onto the business ladder during a time of recession was immensely challenging, as banks refused to lend capital. Venture capital firms wanted to see revenue before investing. Government subsidies were lacking. Laurence utilised his extensive network of family and friends to complete a SEED funding round, allowing him to manufacture the first batch of Pavegen tiles. Additionally, using his strong social media presence, Laurence completed guerrilla installations, photographing his product and marketing online as his first ‘successful installation.’ The supposed project was picked up by media, ultimately spotlighting Pavegen as a new clean-tech innovation.

Now headquartered in London, with over 200 installations in 30 countries worldwide, Pavegen is well on its way to commercial viability and international recognition. Comprising 40 engineers, designers and innovators, the company is growing its global presence, with distributors in countries including Australia, Japan and America.

Pavegen completed its largest project to date with Shell, installing 200 tiles beneath a football pitch in Rio de Janeiro. The tiles harnessed energy from players to power floodlights surrounding the pitch, ensuring the playing field and surrounding community is safe to use at night. The second installment of this legacy project took place December 2015, where Pavegen and Shell created another ‘People-Powered Football Pitch’ in Lagos, Nigeria.

Every time someone steps on the tiles, the surface compresses and electrical power is generated through a hybrid-motion generator embedded within the tile. This electricity is stored in batteries, or used to provide a direct, visual representation of the energy generated from a single step. Through this simple act of a footstep, the tiles can power an array of applications, including lighting, directional signage, sound systems, interactive screens (for data or energy games) and phone-charging stations.

Pavegen also acts as an effective educational tool; having been installed in schools across the UK and Northern America, the technology informs and educates aspiring entrepreneurs about the importance of sustainability in a fossil fuel-dependent world.

Pavegen completed its largest and most successful investment round in May 2015, using the crowdfunding platform Crowdcube. Having set out with an aim of raising £750,000, Pavegen reached its target in 59 hours of launching the campaign, hitting the £1m mark in under a week. The campaign continued, with Pavegen accumulating over 1,500 investors and reaching the £2m mark in under two weeks. With a strong network of investors and £2.06 million under their belt, Pavegen founded their Advisory Board, led by former Apple Exec Jeff Martin and former Interface FLOR President Greg Colando.

In 2016, the company is set to launch a new iteration of the technology, set to revolutionise current perceptions on Pavegen and shift the company from a singular tile offering to a flooring system approach.

Retrieved from "https://www.designingbuildings.co.uk/wiki/Pavegen"
Create an article