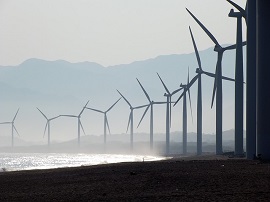 Wind power has long been utilised as a successful source of clean, green energy. The UK's first commercial onshore wind farm was constructed in Cornwall in 1991. Onshore wind farms are now the biggest renewable energy source in the UK. Wind power helps reduce CO2 emissions and has also been found to benefit the local and national economy. Since 2008, the UK has also become the world leader in offshore wind energy.

The UK has a good wind resource which can be exploited by onshore wind farms. It can offer a cost-effective energy generation mechanism, with a 2.5 MW turbine in a suitable position generating up to 6.5 million kwh of electricity each year.

The UK has many onshore wind farms, ranging from small schemes to large multi-turbine installations. In 2015, Renewable UK estimated that there were 5,105 onshore wind turbines in the UK with a combined capacity of 8,284 MW.

There are many considerations when designing onshore wind farms including:

For any wind farms less than 50 MW, the local authority will deal with the application in accordance with the policies defined in the National Planning Policy Framework (NPPF).

A planning application for an onshore wind farm greater than 50 MW is considered to be a nationally significant infrastructure project and will be treated in the same way as the offshore wind farm process. In England and Wales, the Planning Inspectorate will consider the proposed development and provide a recommendation to the Secretary of State for Energy and Climate Change to refuse or permit consent.

The UK has become a world leader in the generation of offshore wind energy with the first offshore wind farm being constructed in Blyth harbour in north east England in 2000. In 2015, 14.3 GW was in construction or had been approved, with a further 1.8 GW in the planning process.

Offshore wind farms can be constructed within the two main sea areas:

The Crown Estate are responsible for the management of the UK's seabed out to 12 nautical miles (nm). The Energy Act 2004 passed the rights to The Crown Estate to licence the generation of renewable energy on the continental shelf out to 12 nm. A lease is required for offshore wind farms and the cables which transport the electricity ashore.

A full lease will only be issued by The Crown Estate once all statutory consents and permits have been obtained. During this process, an Environmental Impact Assessment (EIA) is required and compliance with the Habitats Regulations must also be demonstrated, possibly through a Habitats Regulations Assessment or Appropriate Assessment. Usually, the development will also be subject to a Strategic Environmental Assessment (SEA) which will be conducted by the Department of Energy and Climate Change (DECC) or Marine Scotland.

As part of the planning process and Environmental Impact Assessment, a suite of environmental surveys will be required to assess any environmental impacts that a wind farm may have on species that live or use the offshore environment (air and sea). Typical surveys could include for example sea mammal monitoring surveys or fish surveys.

In September 2017, the results of a government auction for subsidy contracts for two offshore wind farms showed that the price of building has fallen by a third since 2012 to a record low price.

Developers bid in the auction far more aggressively than expected for the multi-million-pound government subsidies, driving the cost down to the 'exceptionally low' rate of £57.50 per MWh; far higher than the expected £70-80. This price is half what new offshore wind farms were being awarded just two years ago.

Ministers said the subsidies, paid for by consumers on energy bills, would bring forward enough clean power for 3.6 million homes and create thousands of jobs.

As the technology continues to mature, developers believe that a new generation of much bigger turbines will be capable of achieving further cost reductions in the near future.

In September 2018, Walney Extension, the world's biggest offshore wind farm, officially opened in the Irish Sea. Situated just off the Cumbrian coast, the farm covers an area of 145 sq. km, consists of 87 turbines measuring 190 m in height, and has a capacity of 659 MW, enough to provide electricity for 590,000 homes.

Walney Extension uses less than half the number of turbines than the previous biggest wind farm, the London Array, but they are more powerful, demonstrating how the technology has developed in the last five years.

Matthew Wright, the UK managing director of Danish energy firm Ørsted, the project’s developer, said: “It’s another benchmark in terms of the scale. This – bigger turbines, with fewer positions and a bit further out – is really the shape of projects going forward.”

Retrieved from "https://www.designingbuildings.co.uk/wiki/Wind_farm"
Create an article