Traditionally, a windmill was a building/structure which used wind power to grind wheat or corn or to perform other repetitive tasks. Power was produced by the action of a wheel of sails or vanes which were forced to rotate by the wind. This rotation was connected to a shaft (either horizontal or vertical) which in turn rotated and was connected to equipment that performed the required work, whether grinding or pumping water.

However, as power generation is at the mercy of the wind and throughout history, where a constant power source was required or where the location was in a river valley, a water wheel (producing power by a similar action) was often used instead.

Windmill sails have varied through time. A common method was to cover a timber lattice-framework with sailcloth. Alternatively, in colder climates, the sailcloth was replaced by wooden slats which could be more easily handled in freezing conditions.

There is much uncertainty concerning where and when windmills originated. They go back thousands of years but it is a strange quirk of history that they were probably unknown to the Greeks and Romans. No explanation has been given for this despite the fact that both cultures fully understood and could harness sail power for boats.

Windmills were known to the Islamic world – notably Persia – as early as the 10th century AD, some say even earlier. In Europe, the earliest instances were in France, England, Germany and the Netherlands in the late 12th century. By 1191, windmills became a recognised element of European society and Pope Celestine III ruled that owners of windmills should pay tithes. The next 100 years saw windmills become common features in the landscapes of northern Europe.

It took another two centuries to see the introduction of the tower mill which had a fixed (usually masonry) substructure and a rotatable cap. This allowed the tower to be made taller and the sails to be made longer. Keeping the cap facing the wind was initially achieved manually using winches but this could later be achieved automatically by the use of a fantail mounted at the rear of the mill and at right angles to the sails.

A later development was the Smock mill, a timber-framed structure clad in boards and thatched or covered by other materials such as metal and slate. Typically, octagonal in plan, the lighter weight of such structures made them suitable for locations with unstable soils, especially for draining marshland and other areas.

The jib sail is seen in some of the Greek Islands and other parts of the Mediterranean and consists of isosceles triangle-shaped sails. Sails can be adjusted to suit the wind force but the mill has to be stopped to achieve this. 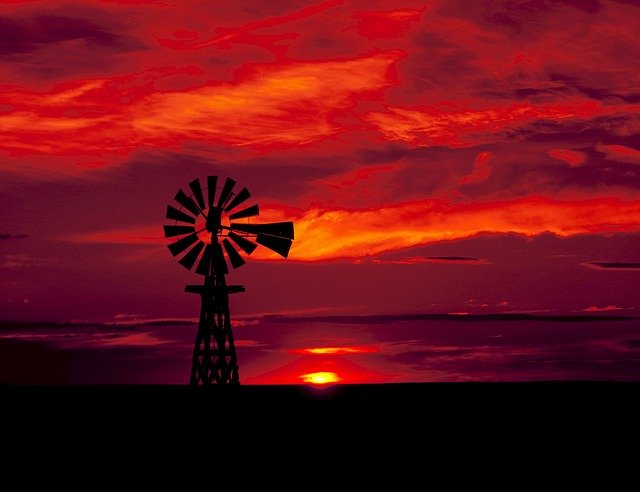 The multi-vane propeller-type of windmill is a common sight in the US and comprises a vertical rotor with a wheel of around 15 or more segment-shaped blades. They rotate about a horizontal shaft and must be orientated into the wind to achieve optimum power. This is achieved in a similar way to the fantail system on traditional tower mills by the use of a vertical vane or rudder that produces the required turning moment. This type of mill is commonly used on farms to pump water when electricity is unavailable, and also to charge batteries. One of the largest multi-vane windmills has an overall diameter of 53m and a maximum blade width of 4.9m.

A similar principle is exploited by modern-day wind turbines which have propellers to generate commercial, residential and industrial electricity. For more information see: Wind turbine.

The S-rotor type of windmill is mounted on a vertical shaft and converts the force of the wind into torque. It typically comprises an S-shaped assembly rotating about a vertical axis which, because of the circular configuration, catches the wind and so develops the same power independently of wind direction.

Retrieved from "https://www.designingbuildings.co.uk/wiki/Windmill"
Create an article