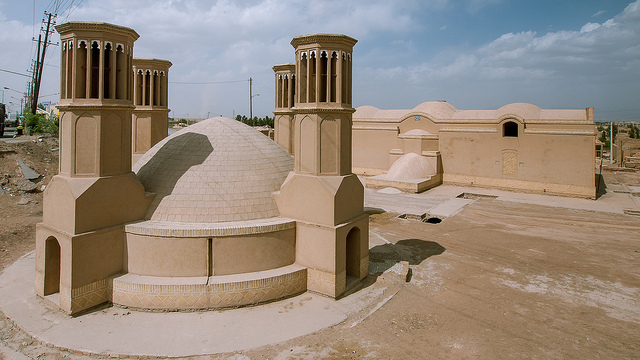 A windcatcher, also known as a windtower, is an architectural element used for natural ventilation. Windcatchers are traditional in Persian architecture, as well as in Ancient Egypt, and can be found across the Middle East.

They generally take the form of small towers installed on top of buildings, although they can be found in several different shapes and structures. The towers draw air from outside into a building, providing natural ventilation in hot, arid and humid areas. Windcatchers were typically built facing away from the wind to try and prevent ingress of blown dust and sand.

Windcatchers are passive systems that require no energy for operation.

The direction of airflow at that specific location will determine the windcatcher design. Windcatchers can be one of the following:

If wind tends to blow from one side only, then it will be built with one downwind opening, without openings in any other directions.

These windcatchers tend to be more efficient for airflow circulation and have better performance. They serve two functions – to blow and suck air into a building.

These tend to be either four, six or eight-sided windcatchers, and are bigger and taller than the two types above. The exact height and structure of each opening depends upon the specific region’s climate.

This is the most technical form of windcatcher and achieves better performance than the other types.

The dimensions of a windcatcher depend on the following:

Windcatchers can function in a number of different ways.

When using a windcatcher to try and cool the inside of a building, a tall, capped tower with a uni-directional opening. This ‘catches’ wind on one side and brings it down into the building via the tower. While the air is not cooled by the windcatcher itself, the rate of airflow provides a cooling effect.

Windcatchers can may be used in combination with an underground canal, known as a qanat. The tower’s open side faces away from the prevailing wind, and when hot air is drawn down the tower into the qanat it is cooled by coming into contact with the earth and cold water. The building is cooled by this air that is then drawn back up through the windcatcher.

In environments that experience minimal wind, or where a qanat is impractical, a windcatcher can be used to function as a solar chimney which allows hot air to travel upwards and escape from the top of the building. In this way, large buildings – especially those constructed with thick adobe to provide good heat transmission resistance – can be kept at chilled temperatures during hot periods.

Water is sprayed uniformly on the surface of a column which is constructed of materials such as unglazed ceramic conduits stacked on top of one another. By doing so, the column is dampened, and the effect of evaporative cooling delivers cooler air to the inside of a building.

This is proposed for use in areas of typically low wind speeds. It works by using pads made from a series of straws or cellulose placed at the apertures on top of the windcatcher. Water is continually sprayed onto them, meaning that the air that flows through is evaporatively cooled. Due to its subsequent density increase, a downward circulation of air is achieved.

Some of the limitations of conventional and traditional windcatchers include:

Retrieved from "https://www.designingbuildings.co.uk/wiki/Windcatcher"
Create an article