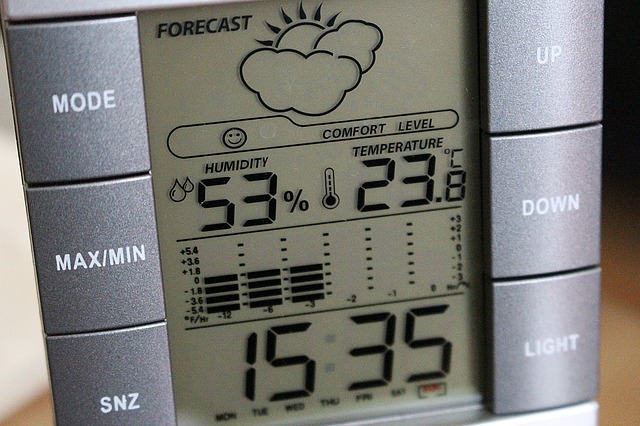 When air cools, it is less able to “hold” moisture, that is, the saturation water vapour density falls, and so relative humidity rises. When the relative humidity reaches 100%, the air will be saturated. This is described as the dew point. If the air continues to cool, moisture will begin to condense.

Humidity influences thermal comfort. The higher the relative humidity, the less heat a person is able to lose through the evaporation of moisture on the skin, and so the hotter they will feel. Conversely, air that is too dry can cause problems such as dry eyes, nose, ears and throat. Typically, a relative humidity of 40 to 60% is appropriate in many buildings.

Humidity can be measured using a hygrometer. Typically these are electronic moisture detectors, or devices such as a sling psychrometer which measures dry-bulb temperature and wet-bulb temperature, allowing relative humidity to be calculated or read from charts.

Humidity can be controlled by limiting sources of moisture (including reverse condensation, where moisture evaporates from damp materials), increasing temperatures, humidification or dehumidification, and by ventilation. Condensation can be further avoided by increasing surface temperatures (such as by the inclusion of insulation or by improving glazing).

In particular, it is necessary to avoid cold bridges, situations in a building where there is a direct connection between the inside and outside through one or more elements that are more thermally conductive than the rest of the building envelope, resulting in lower localised temperatures.

Retrieved from "https://www.designingbuildings.co.uk/wiki/Humidity"
Create an article