Small scale solar thermal collectors are used for heating things such as swimming pools and for building heating systems, both for residential and commercial use. This occurs at a local scale, and systems can often be fitted to existing buildings (Ecoliving, n.d.).

Large scale solar thermal collectors use mirrors or lenses to focus solar radiation; allowing much higher temperatures to be generated using a technology called Concentrated Solar Power (CSP). The temperatures generated can be used to produce electricity at an efficiency often between 30% and 40%. Over 100 MW of power can be produced by a single plant (Solar-Thermal, 2008).

[edit] Drivers for developing the technology

There are a number of drivers that have led to the recent development of large scale solar thermal energy.

The European Commissions Institute for Energy states that just 0.3% of the solar radiation falling on the Sahara and Middle East deserts would provide enough energy to supply the current average European consumption (Figure 2) (Greenpeace International, 2009).

The predicted 2050 electricity mix includes solar contributions of 25% from a concentration of plants in southern Europe and MENA. This mix would result in Europe meeting its 2020 vision of CO2 reductions and renewable energy input (Zickfeld & Wieland, 2012).

The production and distribution of clean renewable energy from southern Europe and the MENA region requires the modernisation and expansion of the existing electricity distribution network. This has been described as the bottleneck standing in the way of massive expansion (Werenfels & Westphal, 2010).

High Voltage Direct Current (HVDC) transmission lines will assist in the transportation of electricity produced in the MENA regions to the rest of Europe. HVDC cables spanning distances of 2,000km already exist in China, and show transmission losses of just 3 to 4 % per thousand kilometres (Werenfels & Westphal, 2010).

The European Commission believe 200 billion Euros will have been devoted to energy transmission networks in the EU by 2020. This is partly due to the 2009 EU Renewable Energy Directive requiring EU countries to “take appropriate steps to develop transmission and distribution grid infrastructure, intelligent networks, storage facilities and the electricity system”. Although this is a large investment, it is justified by the predicted 20% increase in costs of national solutions (EWEA, 2012; Europa, 2010).

The 2011 communication of the European Commission on Smart Grids identified the rollo-ut of smart grid technologies as a European infrastructure priority. Regional policy also states that 986.5 million Euros will be budgeted for the investment in Renewable energy: solar for the period of 2007-2013 (European Parliment, 2012).

Spain is the world leader in the development of Concentrated Solar Power (CSP) technologies, currently capable of producing enough electricity to meet 4.1% of the nation’s demand over a period of 17 hours (Solar Server, 2012). This was produced by 35 CSP plants generating 1581 MW. This amounts to 72.85% of global CSP production (EVWIND, 2012). 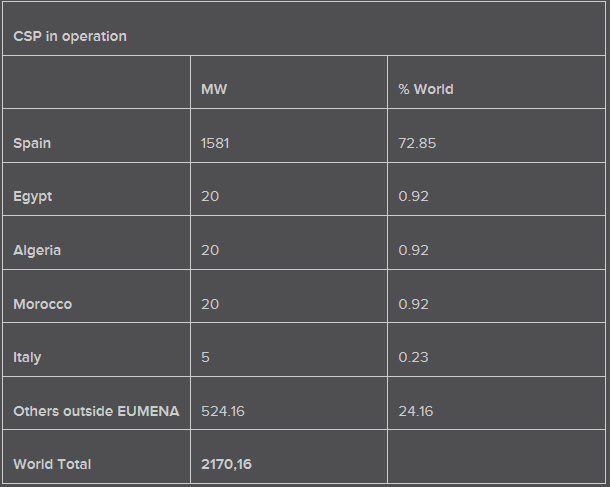 In 2011 the DESERTEC Foundation evaluated and endorsed the TuNur 2 Gigawatt CSP project in Tunisia. This has received support from the Tunisian Government and should begin electricity export to 700,000 European households by 2016 (DESERTEC, 2012; Yaros, 2012). 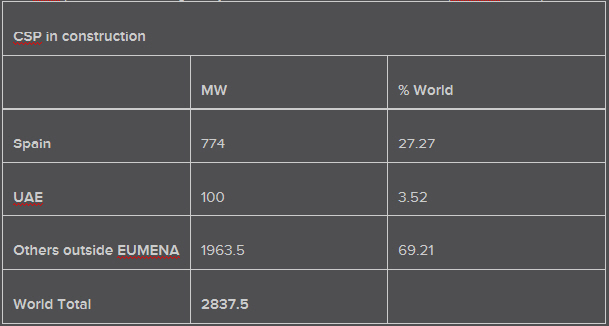 NB Although it has been suggested that the overall EU network needs improving if it is to meet its objectives, Imperial College London together with DNV KEMA Energy & Sustainability studied the impact of TuNur on the European network and found no significant bottleneck preventing the electricity from being traded with the UK (Nur Energie Ltd., 2012).

[edit] CSP in the future

The future for large scale thermal for Europe is uncertain. Whilst the technology is mature and advanced enough to meet the demands required by the EU 2020 vision, the current European transmission network will need to be improved in order to enable Euro-Mediterranean-MENA electricity trading. For the 2020 goals to be achieved the construction of CSP facilities and infrastructure across the Mediterranean and MENA needs to begin immediately.

Political instability and unrest is also a key restraint on the development of CSP.

With the infrastructure and correct political and legal framework put in place, the potential for large scale thermal for Europe can be achieved, creating a greener future for the economies of MENA and the EU.

Retrieved from "https://www.designingbuildings.co.uk/wiki/Large_scale_solar_thermal_energy"
Create an article