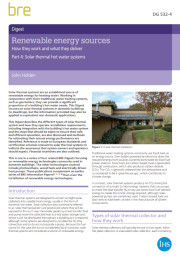 Renewable energy sources: how they work and what they deliver: Part 4: Solar thermal hot water systems (DG 532/4) was written by John Holden and published by BRE on 5 December 2014.

The other technologies covered include:

Solar thermal systems are designed to convert sunlight (solar radiation) into useable heat energy, usually in the form of domestic hot water. Solar collectors (also commonly referred to as solar thermal panels) are positioned where they will be exposed to the sun’s rays. Generally speaking, a heat transfer fluid and pump move the collected heat to a hot water storage tank, where it can be distributed throughout a building as required, although some systems are designed to circulate the fluid by convection and so do not incorporate a pump. Working together with more traditional water heating systems, such as gas boilers, this can provide a significant proportion of a building’s hot water needs.

DG 532/4 focuses on solar thermal systems in dwellings. The information provided may also be applied to equivalent non-domestic applications. It describes:

Reference is made to European Standards and certification schemes to indicate the assurances that system owners and operators should expect. Financial incentives are also outlined.

Retrieved from "https://www.designingbuildings.co.uk/wiki/Renewable_energy_sources:_how_they_work_and_what_they_deliver:_Part_4:_Solar_thermal_hot_water_systems_DG_532_4"
Create an article