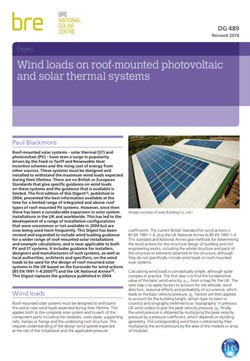 Wind loads on roof-mounted photovoltaic and solar thermal systems (DG 489) was written by Paul Blackmore and published by BRE on 22 May 2014.

Roof-mounted solar systems (both solar thermal (ST) and photovoltaic (PV)) have seen a surge in popularity driven by incentive schemes and the rising cost of energy from other sources. These systems must be designed and installed to withstand wind loads, but there are no British or European Standards that give specific guidance on wind loads on these systems and the guidance that is available is limited.

The first edition of this Digest, published in 2004, presented the best information available at the time for a limited range of integrated and above-roof types of roof-mounted PV systems. Since then there has been considerable expansion in solar systems, which has led to the development of a range of installation configurations that were uncommon or unavailable in 2004. As a result, the Digest has been revised and expanded to include guidance for a wider range installations and example calculations, and it is now applicable to both PV and ST systems.

It includes guidance for installers, designers and manufacturers, local authorities, architects and specifiers in the UK, based on the Eurocode for wind actions (BS EN 1991-1-4:2005) and the UK National Annex.

Retrieved from "https://www.designingbuildings.co.uk/wiki/Wind_loads_on_roof-mounted_photovoltaic_and_solar_thermal_systems_DG_489"
Create an article