[edit] What is energy storage?

The term ‘energy storage’ encompasses a wide range of technologies with diverse capabilities.

Pumped water storage is well established, and accounts for the great majority of schemes, however, it is relatively inefficient as it involves converting electricity into kinetic energy, then to potential energy and then back into electricity. It generally requires hilly terrain, although low-lying Denmark has pioneered the reverse concept of a 'green power island', where sea water is pumped out of areas and then let back in through power generating turbines. 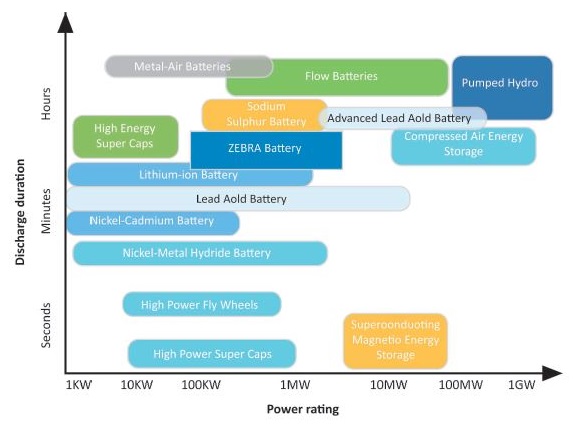 Other forms of energy storage include:

Technologies for ice and heat storage already exist but further improvement can be made to increase efficiency and investigations are on-going on phase change materials (PCM). Further deployment should be achieved in smart cities and building applications, such as centralised air-con systems incorporating ice storage; CHP plant equipped with heat storage; or thermal storage in renewable systems.

This is attractive but needs to cope with the issue of heat exceeding 650C that can be generated during the air compression process.

Further improvements of this mature technology will be on safety, cost reduction in high capacity storage, and reduction of self-discharge.

In order to solve the low energy density and high capital cost issue, the industry is investigating lithium-ion capacitor systems; finding new electrolytes capable of voltage beyond 2.7 V and with less toxicity; exploring new materials that have very low cost and low environmental impact and can produce high-performance, such as activated carbon, metal oxides.

It still early to predict when this will become a commercially viable solution. Current R&D is on improving efficiency at high temperature and reduced cost.

Much work is going into developing more affordable, large-scale and reliable storage systems, most obviously batteries, including those for domestic energy storage from home photovoltaic (PV) systems, and from electric vehicle batteries (smart cars) to feed power back into the grid at times of peak demand.

[edit] How can storage be used? 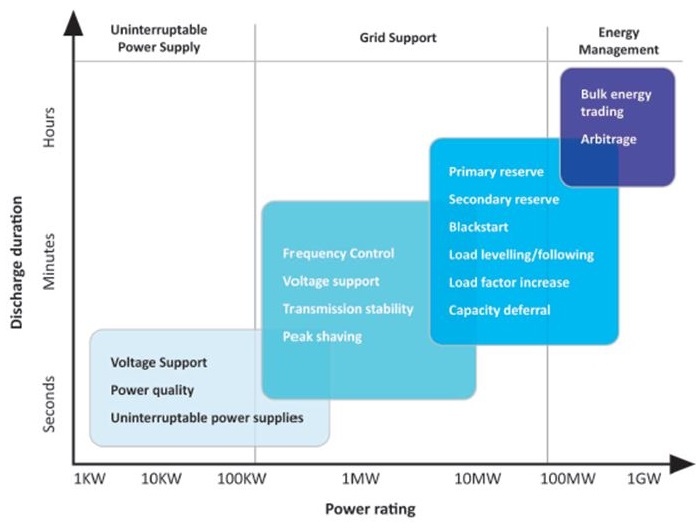 The technical diversity of energy storage technologies means that they can be deployed for a wide range of applications.

Today, the majority of storage technologies are in research and development, early commercialisation or demonstration phases.

Costs are of course, expected to reduce as the technologies develop and deployment increases but achieving greater deployment relies upon a valid business case for projects both now and in the

longer-term if energy storage is to be deployed in both the smart grid and as an integral part of smart buildings.

Development of new battery technologies is focusing on lifecycle cost, energy density (size), safety, operating temperature and degradation. Many new technologies are under demonstration, prototype, laboratory and concept stage. Broadly, the various stages of development include: 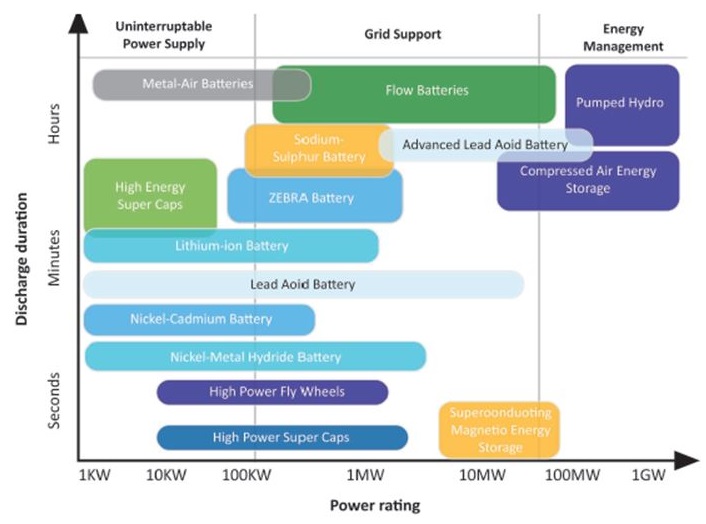 Apart from cover over short periods, battery storage has been prohibitively expensive; however lead-acid and lithium batteries are now commercially available in Europe for about €1,000/kWh. And in a country with high consumer electricity prices, such as Germany, PV with battery storage can have a lower unit price than mains electricity.

Meanwhile, in 2015, US electric car manufacturer Tesla, launched “Powerwall” battery storage aimed at the residential market and providing 10 kWh for about $3,500, and Mercedes launched a 2.5 KwH home battery. Combining up to 8 can provide a total of 20 KwH. Allowance must also be made for the cost of a battery management system and installation.

A study for the Australian Renewable Energy Agency in July 2015 found: “The potential for significant cost reduction of some battery technologies provides real opportunity for significant deployment in multiple applications. In particular, Li-ion batteries prices are expected to reduce by over 60% and flow battery prices by over 40% by 2020.”

Ongoing challenges include poor understanding and undervaluation by stakeholders, however, regulatory reforms and technological advances are expected to help bring commercial and industrial energy storage into the mainstream.

The criteria for spotting the higher potential energy storage markets include countries; where renewable integration is very high and which wish to avoid curtailment and intermittency; or in which there is an open energy market which can provide attractive return on investment; those in which there is a shortage at times of peak demand and shortage of energy; and locations which are lacking demand side management.

Retrieved from "https://www.designingbuildings.co.uk/wiki/Energy_storage_-_the_missing_piece%3F"
Create an article