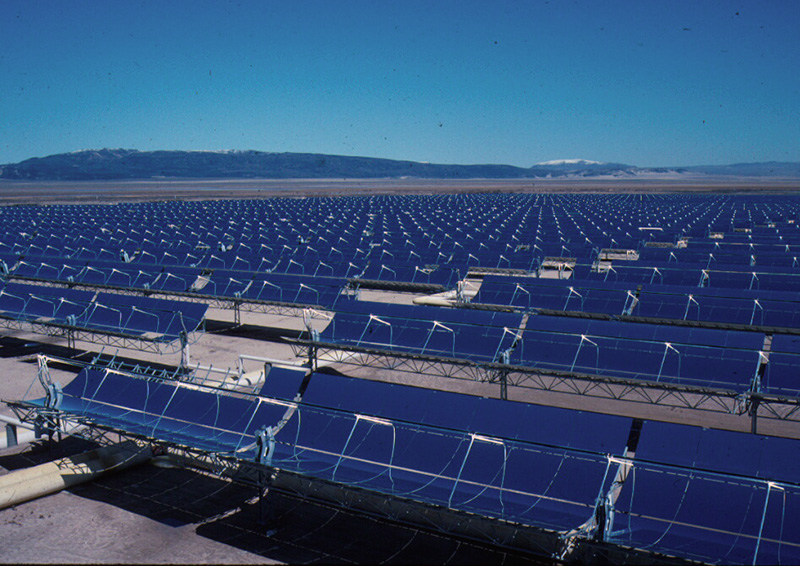 In 90 minutes, enough sunlight strikes the earth to provide the entire planet's energy needs for one year.

However, solar energy is diffuse and not conveniently concentrated in places of high demand. Seasonally, its availability in higher latitudes is inversely proportional to demand and of course it is completely absent at night. It is affected significantly by cloud cover as well as latitude and time. At similar latitudes, the average annual amounts falling on the earth surface can vary by a factor of two or more.

There are three fundamentally different methods by which solar energy may be harnessed. The earliest applications in the latter part of the 19th and early part of the 20th centuries saw the development of concentrated solar power stations raising steam to generate electricity. Later, solar thermal applications were used to provide hot water, while in recent years there has been significant development of electricity generation systems using the photovoltaic (PV) principle.

There are several types of CSP station, but by far the most common are those which have hollow tubes containing water running along the foci of parabolic collectors that track the sun. These raise steam to generate electricity in the conventional way.

To the end of 2013, 3.4 GW of CSP had been installed worldwide, the major markets being Spain and the USA. The second most popular CSP installations are variants of the solar power tower, where tracking mirrors focus the sun on a single collector situated on top of a tower. This collector raises superheated steam for generating electricity.

Between 2012-15, 150+ MW of integrated solar combined cycle generating capacity, where steam raised in a central solar plant supplements steam in a CCGT station, has been installed worldwide. Such stations have been installed in Algeria, Egypt, Iran, Italy, Morocco, and the USA. Current estimates of CSP potential suggest that 30 GW could be installed in the south west deserts of the USA by 2030 with up to 120 GW by 2050.

Some CSPs now incorporate molten salt thermal stores with up to 15 hours storage capacity to provide electricity generation overnight, such as the Gemasolar 19.9 MW Solar Tower Plant in Fuentes de Andalucía in Spain, commissioned in 2011.

As of 2013, the installed capacity of CSP represents only 2.4% of the market for solar generated electricity.

The photovoltaic effect was first observed by Alexandre-Edmond Becquerel in 1839 and is the creation of electric currents in a material exposed to light. The energy in photons absorbed by the material is transferred to electrons producing a DC current in an external circuit.

Photovoltaic cells are composed of layers of at least two semiconductors to form p-n junctions. A variety of materials is used in their manufacture including monocrystalline silicon, polycrystalline silicon, amorphous silicon, cadmium telluride, and copper indium (gallium) (di)selenide. Arrays of photovoltaic cells may be connected to provide installations of any power rating.

Typical solar panels for domestic and commercial installations are around 15-20% efficient in optimum conditions. Actual output is less depending on the orientation of the panels and other factors.

However, if one part of a string of panels is even partly shaded, the losses can be much higher. Efficiencies are improving with development, but more significantly, unit costs are diminishing substantially with increasing demand and production. When assessing the value of an installation, it is the comparison of total lifetime cost and return that is most important.

Some consideration is now being given to wiring buildings with a secondary DC circuit for use for computers, LED lighting, etc. to thereby avoid these losses and any further losses at the point of end use when the AC electricity is converted back to DC.

At the end of 2013, the worldwide installed capacity of solar PV was 139 GW with China, Japan and the United States being the major installers. At 39% increase during the year, it was the fastest growing of any renewable energy technology. In the UK, the total installed capacity at February 2015 was 5,229 MW, a 70% increase over the preceding 12 months, more than half of which derives from the Renewables Obligation. In February 2015, over 660,000 sites in the UK had PV installations. Most of these are homes, though there were also 292 large solar farms, with an average capacity of 6687 MW. Load factors of over 10% have been reported in the UK.

Solar energy may be used for low temperature heating, most commonly for domestic hot water (DHW) but also for space heating. There are two basic designs: flat plate collectors and evacuated tube collectors. Hybrid panels are also available, combining PV and thermal reaching a cogeneration efficiency of 80%. A heat transfer fluid (air, water or an antifreeze fluid or mixture) circulates through the collector where it is warmed and a heating coil in (usually) the DHW storage tank. Ideally, the collector and tank are configured to achieve natural convection but a pump is generally needed. Usually another heating coil is connected to the conventional boiler circuit.

Additional factors are relevant for heating. The effectiveness is dependent on the water in the storage tank being cool enough to benefit from solar energy input, presenting another control requirement. The benefit will tend to increase with use of water. Alternative heating (boiler or immersion heater) should be inhibited for as long as possible before hot water is required and then used just sufficiently so that the storage tank temperature is low when solar energy next becomes available. The mean solar energy gained from identical systems with similar usage of hot water can vary significantly from one month to the corresponding month in another year.

‘Passive’ solar energy is used for agriculture and horticulture, drying, evaporation (such as in salt pans), cooking, chemical processes, distillation and treatment of water, and for the natural ventilation, heating and cooling of buildings. The massing, orientation, and detailed design of buildings are important in the context of optimising solar gain (wanted or unwanted) and reducing energy demand.

Other examples of ‘active’ systems are the use of PV panels to power heat pumps for either heating or cooling, and for many small electrical loads, especially when remote from a mains supply. PV panels are also being used in a variety of ways in transportation, even aviation (experimentally).

Since the 1990s, several financial incentives have been utilised to promote solar installations including capital grants, obligations on utility companies to purchase renewable energy and payments made per unit generated (i.e. Feed-in Tariffs – FITs). The latter two mechanisms are more effective in driving costs down than fixed grants. For PV installations, the most common support is through FITs, now used by around 50 countries.

An FIT provides an agreed tariff for electricity generated by an eligible electricity source and is guaranteed to run for a fixed term, usually 20 or 25 years. In many cases the tariff is index linked to allow for inflation, but new installations receive progressively lower tariffs. During late 2011 and 2012, there were significant reductions in tariffs for new installations in Germany and the UK, while in Spain FITs were suspended indefinitely in 2013.

In the UK, as of 2015, three incentive schemes relevant to solar energy have been in operation:

The RO, introduced in 2002, provides incentives for large-scale deployment, requiring suppliers to obtain a proportion of their electricity from renewable sources, however, as of 1 April 2015, this support ceased.

Similar to FITs, the RHI pays a tariff for each unit of heat generated from renewable resources. There are separate schemes for domestic and non-domestic generation. Under the FIT scheme, businesses and individuals are paid a generation tariff for electricity generated and an export tariff for any surplus exported.

The carbon emission factor for electricity generation in the UK in 2014 is 0.49 (kgCO2/kWh). The support provided by financial incentives can be assessed in terms of the cost per tonne of carbon reduction which can then be compared with other strategies.

The FIT for domestic PV at 13.39 p/kWh (higher rate, April to July 2015) equates to a carbon reduction cost of around £271 per tonne of CO2. Note that this relates to retail markets for domestic consumption where the delivery price of grid-based electricity is at its highest, although some European countries (Germany, Italy, Spain) have achieved parity between PV installations and traditional supplies.

[edit] The future of solar energy

Solar energy offers a tantalising prospect. ‘Raw’ solar energy is abundant and its whole life cycle carbon emissions are very low. The International Energy Agency has suggested that solar technologies could provide a third of the world's energy by 2060.

The technological challenges of storage and transmission (or transport) to facilitate achievement of that target are arguably less challenging than for fusion, an equally tantalising prospect but one which always seems to remain some decades in the future.

Given the political will to address the long term security of the most favourable generation sites, and of transmission and transport, solar energy has the potential to make the biggest contribution of any single energy source to the trilemma of affordability, security of supply and decarbonisation.

This article originally appeared as ‘Solar energy’, published by the Institution of Civil Engineers on 1 May 2015. It was written by Ben McAlinden.

Retrieved from "https://www.designingbuildings.co.uk/wiki/Solar_energy"
Create an article