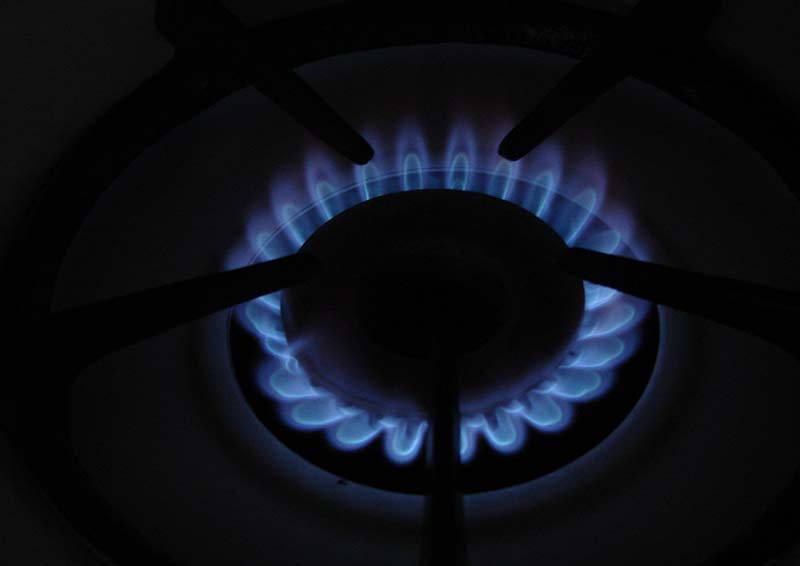 Natural gas forms an important part of the global energy mix. In the coming years, the natural gas market is expected to be the fastest growing for fossil fuels globally. The global market for natural gas will expand even further as liquefied natural gas (LNG) allows integration of regional markets, leading to greater congruence in global price movements. Energy supply will also be boosted by unconventional gas, such as shale gas.

Global natural gas consumption was 3.35 trillion cubic m in 2013, approximately 1% higher than 2012. This was a relatively modest growth compared to the previous decade. Gas demand continued to shift from mature OECD countries to non-OECD regions where there has been rising gas consumption in the industrial and power sectors.

A critical factor influencing the level of growth in consumption across all regions has been the development of domestic production capabilities. Economic factors have also affected consumption by enhancing the ability of importing countries to afford more expensive gas on the global gas market.

The global natural gas supply grew by approximately 1% in 2013, compared to 2012. The largest growth in production came from the former Soviet Union region at 1.9%, while supply from the European Union dropped by 0.5% over the previous year.

To provide an indication of the remaining lifespan (years) of gas as a natural resource, the reserves-to-production ratio is illustrated in Figure 1.

Since 2000, the UK Continental Shelf (UKCS) production of natural gas has been declining at an average rate of 8% per annum; however, the rate of decline has not been consistent over the past decade. Despite this, the UK remains one of the two major gas-producing countries within the EU, along with the Netherlands. 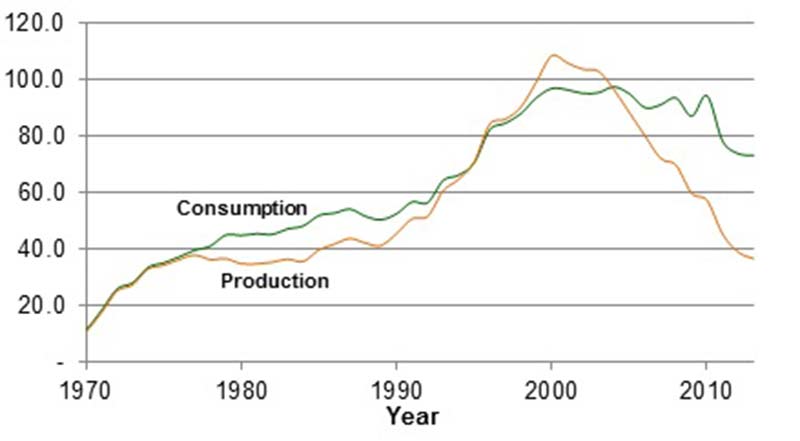 In 2013, the UK’s gross gas production was 38.5 billion cubic m, which was sufficient to serve approximately half of domestic consumption. The UK has been a net importer of natural gas since 2004. LNG imports peaked in 2011 at 25 billion cubic m following the opening of two new LNG Terminals in 2009 (Milton Haven – South Hook and Dragon).

For a detailed analysis of gas consumption in the domestic sector, see the National Energy Efficiency Data-Framework (NEED) published by the Department of Energy and Climate Change.

The total existing UK storage capacity (including LNG storage) is 4.6 billion m3 and there are a number of proposed storage sites which can increase storage capacity by up to 7.5 billion m3. The National Grid’s Gas Transportation Ten Year Statement provides information on the potential future development of the National Transmission System and the proposed storage projects. 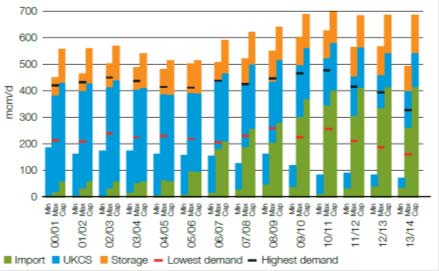 The Transmission System, owned and operated by National Grid, forms a key part of UK gas infrastructure. Gas trade takes place via interconnector pipelines (from Norway, the Netherlands and Belgium), interconnectors to Northern Ireland and Ireland, and shipping to the UK’s LNG terminals. Gas exports and imports were, respectively, 24% and 2.5% lower in 2013 compared to the 2012 figures. As a percentage of UK total gas consumption in 2013, pipeline imports and LNG imports accounted for approximately 57% and 13%, respectively.

In non-OECD regions, transportation is expected to be the primary source of demand growth as a result of increased vehicle ownership.

Increasing use of natural gas in the power and industrial sectors will account for over 80% of overall global demand growth. As global gas demand rises, non-OECD countries will be the largest contributors to incremental demand. This growth will continue to 2035. By contrast, European gas consumption is estimated to fall to 2018, partly due to increased renewable generation.

Increased gas availability, due to a global expansion of gas supply resulting from unconventional resources, has a moderating impact on the price of gas. Hence, global gas demand is expected to increase by more than 50% (compared to the 2010 demand) by 2035.

Non-OECD countries will also provide the largest conventional gas supply increment, while the OECD share of gas production is expected to grow rapidly accounting for approximately 30% of the increase in global gas supply by 2035.

Recent major discoveries in East Africa and the East Mediterranean have led to increased investor focus in these regions. However, production from these fields could be deferred beyond 2020 due to a range of factors, including geopolitical influences, balancing exports with domestic demand, potential fiscal policy changes and development cost associated with new infrastructure.

The market for global gas trade has been expanding as a result of the flexibility offered by LNG. As a result, LNG is set to become the dominant form of traded gas by 2035.

The shift in import demand for natural gas away from North America and Europe and towards Asia will lead to a decline in traded gas supplied via pipelines. By 2035, the growth in inter-regional gas trade will account for around 30% of the increase in overall gas consumption and LNG is set to become the dominant form of traded gas.

The growth in shale gas production is expected to mean North America will gradually become a net exporter. Barriers which may impact on this trend are; government-imposed export policies, commercial and technical viability, and challenges in expanding the export infrastructure.

Net imports by Asia Pacific will almost triple, which will account for approximately half of global gas net imports by 2035.

The IPCC forecast that the global decarbonisation rate will continue its positive trend as natural gas and non-fossil fuels sources of energy gain an increasing share in the total primary energy use.

There is general agreement that the average global temperature rise caused by GHG emissions should not be allowed to exceed 2°C above the average global temperature of pre-industrial times, to prevent the most harmful effects of climate change. In 2012, natural gas accounted for 14.4% of the world CO2 emissions. Meeting the emission goals pledged by countries under the United Nations Framework Convention on Climate Change (UNFCCC) would still leave the world 13.7 billion tonnes of CO2 above the level required to avoid exceeding a 2°C warming by 2035.

The 2008 Climate Change Act in the UK established the world’s first legally-binding climate change target, aiming to reduce the net UK greenhouse gas emissions by at least 80% (from the 1990 baseline) by 2050. In 2013, UK emissions of the basket of seven GHGs covered by the Kyoto Protocol were estimates to be 568.3 million tonnes of carbon dioxide equivalent (MtCO2e) – a 2.4% reduction from the 2012 level. In the UK, natural gas is one of the main sources of GHG emissions in the energy supply sector (electricity generation), the residential sector (heating and cooking) and the public sector (heating).

[edit] Unconventional gas and other alternatives

Unconventional gas production is expected to take-off by 2020, however in the medium-term, major gas production developments outside North America are likely to focus on coalbed methane (CBM) and tight gas, as opposed to shale gas production. CBM is a form of natural gas extracted from coal beds and tight gas refers to natural gas produced from low-permeability reservoir rocks, which require hydraulic fracturing to produce at economically viable rates.

The significance of these unconventional resources does not necessarily lie in their volume, but instead, in the broad geographic distribution and the associated economic and political implications.

Natural gas-fired power generation technologies are deemed to be best suited for supporting the intermittency of wind power generation by responding to changes in power demand and enabling supply flexibility. This is due to their technical capabilities and relatively low investment costs. Hence, it is likely that as the wind market share increases, the role of natural gas as a flexible fuel supporting wind power will also grow, leading to an increase in natural gas demand in the power sector.

The ICE themed issue on natural gas, Proceedings of the ICE – Energy, considers technological developments in synergies with hydrogen production, distribution and use, which can induce changes in the natural gas industry.

This article originally appeared as Natural gas - a global perspective, published by the Institution of Civil Engineers on 31 July 2015. It was written by Rose Haziraei-Yazdi.

NB Net Zero by 2050, A Roadmap for the Global Energy Sector, published by the International Energy Agency in May 2021, states: ‘Natural gas: Comprises gases occurring in deposits, whether liquefied or gaseous, consisting mainly of methane. It includes both “non-associated” gas originating from fields producing hydrocarbons only in gaseous form, and “associated” gas produced in association with crude oil as well as methane recovered from coal mines (colliery gas). Natural gas liquids (NGLs), manufactured gas (produced from municipal or industrial waste, or sewage) and quantities vented or flared are not included. Gas data in cubic metres are expressed on a gross calorific value basis and are measured at 15 °C and at 760 mm Hg (“Standard Conditions”). Gas data expressed in tonnes of oil equivalent, mainly for comparison reasons with other fuels, are on a net calorific basis. The difference between the net and the gross calorific value is the latent heat of vaporisation of the water vapour produced during combustion of the fuel (for gas the net calorific value is 10% lower than the gross calorific value).'

Retrieved from "https://www.designingbuildings.co.uk/wiki/Natural_gas"
Create an article