Trenchless pipe relining technologies are gaining traction in the global market, due to their outstanding performance and technical advantages. These techniques repair existing underground pipelines by inserting a relatively small diameter pipe or by spraying coating material into the damaged pipe to create a lining within the pipe, with very limited or no excavation.

The key features of these techniques are that the pipe relining has become faster, easier, cheaper, and cleaner. In addition, they avoid traffic jams, destruction of landscape, and other environmental impacts. 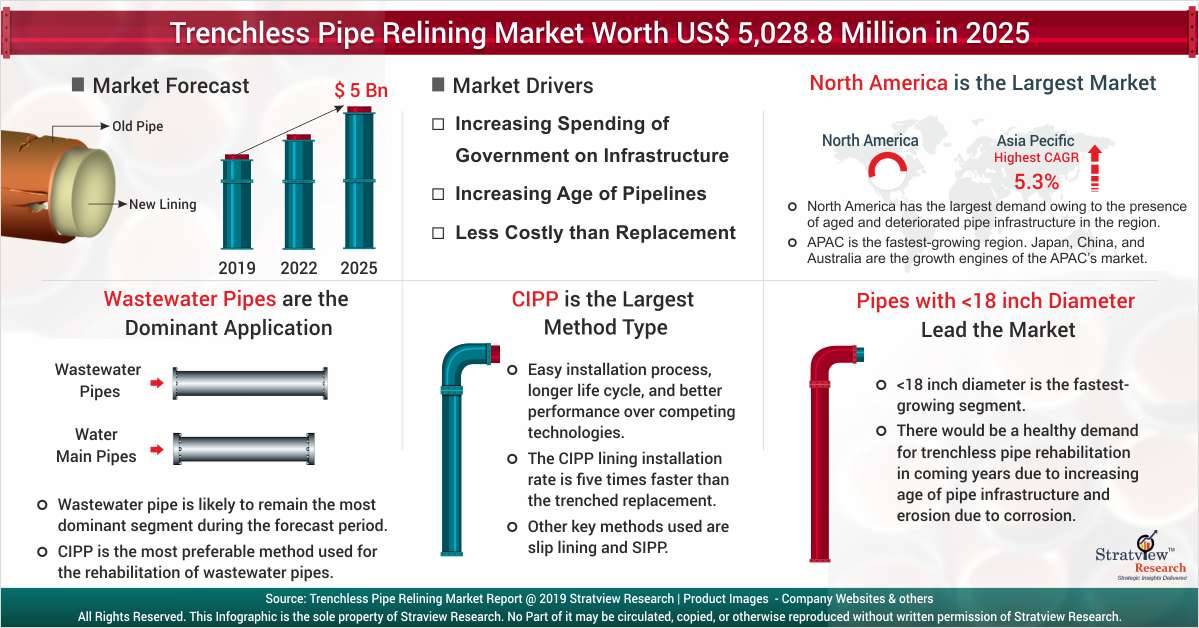 Ageing existing pipeline infrastructure, increasing deterioration rate, growing population, and urbanisation in the key countries, such as the USA, Germany, and Canada, have led to an increased focus on trenchless pipe relining techniques to reduce water loss and rehabilitate infrastructure while avoiding traffic jams and destruction of landscaping.

The USA alone has more than 9.5 billion feet of the installed pipeline of which most were laid in mid of the 20th century. Similarly, in the European Union states, around 23 billion feet of pipes are in operation from the last 100 years. In Japan, about 15% of water pipes have outlived their 40-year duration as of 2016.

The trenchless pipe relining market is projected to grow at an impressive rate over the next five years to reach an estimated value of US$ 5.0 billion in 2025. The market is mainly driven by an ageing existing pipeline network coupled with a surge in spending of government and municipal corporations to repair and maintain existing pipes.

Based on method, CIPP is projected to remain the dominant as well as the fastest-growing segment in the market during the forecast period. The dominance of CIPP technology is mainly due to its fast and easy installation process, longer life cycle, and better performance over competing technologies. The CIPP lining installation rate is five times faster than the trenched replacement.

Based on the application type, wastewater pipe is likely to remain the dominant segment during the forecast period. CIPP is the preferable method used for the rehabilitation of wastewater pipes. However, watermain pipe is expected to witness the highest growth during the forecast period. The equipment and liner materials used during relining have to be compliant under the certification and standards of NSF/ANSI 61, which has norms related to the material used for the lining of water main pipelines in order to prevent contamination of injurious substances of liners with the potable drinking water.

In terms of region, North America is projected to remain the largest market for trenchless pipe relining during the forecast period. The average active service life of a pipeline installed is around 50 years and most have exceeded this. Relining provides an extension of around 30-50 years to the pipe.

Asia-Pacific is expected to witness the highest growth during the forecast period. Japan, China, and Australia are the growth areas of the Asia-Pacific's trenchless pipe relining market. These economies will generate demand to decrease water loss and improve water quality.

Some of the key players in the trenchless pipe relining market are Aegion Corporation, Granite Construction Inc., Inland Pipe Rehabilitation LLC (IPR), Per Aarsleff A/S, and SAK Construction, LLC. The key customers of these players include state governments and local authorities of America, Federation of Canadian Municipalities, and Private Builders.

Retrieved from "https://www.designingbuildings.co.uk/wiki/Trenchless_Pipe_Relining_Market"
Create an article