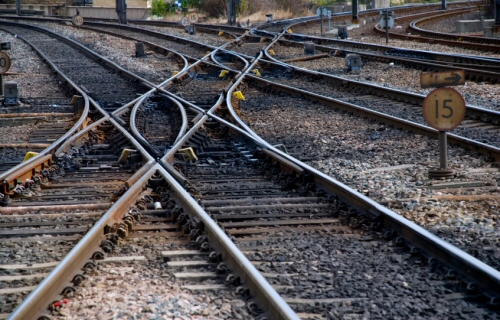 Railways have been an important part of our transport infrastructure since the 19th century, and their development has enabled the use of trains as an effective and efficient means of travel.

The emergence of railways from around the 1820’s marked the beginning of the end for canals, as trains could carry more goods, more people and travelled much faster. The first steam locomotive to carry passengers began operation in 1825, designed by engineer George Stephenson, on a line between Stockton and Darlington.

Stephenson also developed the Liverpool and Manchester Railway (L&MR), a significant improvement on the first steam locomotive. 'The rocket’, was much more efficient, producing more steam and with horizontal pistons directly driving the wheels. The L&MR opened in 1830.

Railways spread rapidly throughout the UK with the increased demand for coal and steel, and for distribution of things such as newspapers and post. The railways were built by ‘navvies’ who would dig foundations, lay stones and fix the track. Most of the work was done by hand, using a pick axe.

The railway track, also known as the ‘permanent way’, is the long horizontal structure that provides trains with a surface for wheels to roll upon.

The most common type of track used around the world is ‘flat bottom’ steel rails supported on sleepers made of timber or pre-stressed concrete.

Typically, tracks are laid on a bed of stone track ballast which is supported by prepared earthworks, known as the track formation.

Ballast consists of crushed stone and is used to uniformly distribute loads from the sleepers to the formation. Ballast also helps with stabilisation, drainage and prevents the sleepers from moving. It is typically laid to a depth of between 225-300 mm, filled to the top of the sleepers and beyond the ends of the sleeper by around 250-500 mm.

The track formation consists of a subgrade and blanket – a layer of sand or stone dust in impervious plastic. The blanket restricts the upward movement of wet clay or silt. Additional waterproofing is provided if deemed necessary. The subgrade layer is slightly sloped at the sides to help water drainage. Water is channelled away by ditch or other type of drain.

In order to prevent soil and water from 'spoiling' the ballast, some railways can use asphalt pavement below the ballast, which helps to stabilise it. Where track is to be laid over permafrost, measures such as transverse pipes of cold air can be laid through the subgrade to prevent melting.

An alternative type of track structure that can be used to alleviate the large demand for maintenance that traditional track requires, is one that does not use ballast. This type of track tends to be used for short extensions that require additional strength such as in rail stations, or in tunnels where maintenance is difficult.

At its simplest, this comprises a continuous slab of reinforced concrete upon which rails are supported directly using a resilient pad. An alternate design is the use of pre-cast pre-stressed concrete units which are laid on a base layer.

The drawbacks of this type of track are its high initial cost, and if it is being used to replace existing track it can require lengthy periods of closure. However, due to the reduction in maintenance it can have a lower whole-life cost.

This type of track involves the rail being supported along its length rather than using sleepers. It was experimented with in the 1840s, but proved to be more expensive in terms of maintenance.

A more modern version is the ladder track which uses sleepers which are aligned along the same direction as the rails, with gauge-restraining cross members that resemble the rungs of a ladder. This system can be used with ballast and without.

Modern rail typically uses hot-rolled steel with a profile similar to that of a rounded I-beam. Because of the high stresses to which they are exposed, rails must be manufactured using very high-quality steel alloy. Rail is graded by weight over a standard length, and the train weight and speed capacity is dependent on the strength of the rails.

In addition to flat-bottom rail, other rail profiles include:

Flat-bottom rail is the most commonly used due to its stiffness, greater stability and reduced maintenance requirements. However, bullhead rails are easy to fix and unfix to sleepers, making them useful in applications that necessitate frequent replacement.

As rails are produced in fixed lengths (in the UK, usually around 20 m), they must be joined end-to-end to create a surface that is continuous. The main ways in which this can be done are:

This consists of lengths of rail that are bolted together using fishplates – perforated steel plates – that are usually 600 mm long and used in pairs on either side of the rail ends.

Small gaps are left between rail ends to act as expansion joints in high temperatures. When trains pass over them, it is this that leads to the ‘clickety-clack’ sound synonymous with railways.

Jointed track requires a large amount of maintenance and does not provide as smooth a ride surface as welded rail, making it less commonly used for high speed trains. It can be prone to cracking around the bolt holes which, unless addressed, can lead to the breaking of the rail head.

This is a more modern type of rail and consists of rail lengths that are welded together by flash butt welding. This forms one continuous rail without joints, which allows trains to travel at high speeds with less friction. Despite being more expensive to lay welded rails, they have much lower maintenance costs than jointed tracks.

To provide restraint to the rails and prevent movement in relation to the sleepers, clips or anchors are used. A common type of fixing are Pandrol rail clips which fix the rail to the sleeper chair. These are typically manufactured from high quality silicon-manganese steel and, when fixed to concrete sleepers, are fitted with malleable iron shoulders.

The Pandrol ‘Fastclip’ is a fully-captive, pre-assembled, unthreaded rail fastening which means all the components are assembled on concrete sleepers before being delivered to site, eliminating the handling of loose components during track maintenance operations. Hand tools or track-mounted machines are used to tension and de-tension the clips.

A sleeper is a rectangular support which lies horizontally between both rails to which they are fixed. Sleepers transfer loads from the rails to the ballast and the track formation, as well as maintaining the rail gauge (the correct width between the rails). Sleepers tend to be between 2.5 - 2.75 m long.

Traditionally, sleepers were made of timber treated with preservatives, but these have a shorter lifespan than more modern alternatives such as concrete and steel. Concrete sleepers are pre-stressed and provide extra stability to the track due to their increased weight.

Steel sleepers can be used in applications where hot metal processing and chemical spillage are risks, although they are unsuitable on electrified lines and cannot be used where track circuits exist. They typically take the form of a steel plate formed into an inverted trough with flanged ends.

Switches and crossings vary in terms of complexity and application.

Retrieved from "https://www.designingbuildings.co.uk/wiki/Railway_engineering"
Create an article