The longest railway tunnels in the world

The world’s lengthiest railway tunnel, the Gotthard Base Tunnel (GBT) opened for business following its inauguration in June 2016. Seventeen years in construction, and a world-record 57.1 km in length, the tunnel admitted its first trains in December 2016.

Its construction was a phenomenal feat of engineering, involving around 2,400 workers and with 28.2 million tonnes of material excavated. At a cost of around 12.5 billion Swiss francs (or $12.6 in US currency), it roughly matched the budget of the London 2012 Olympics and used around 4 million cubic metres of concrete (or 84 Empire State Buildings).

Carving its way through the Alps, the tunnel was built to reduce train journey times significantly and provide a major increase in rail freight capacity. 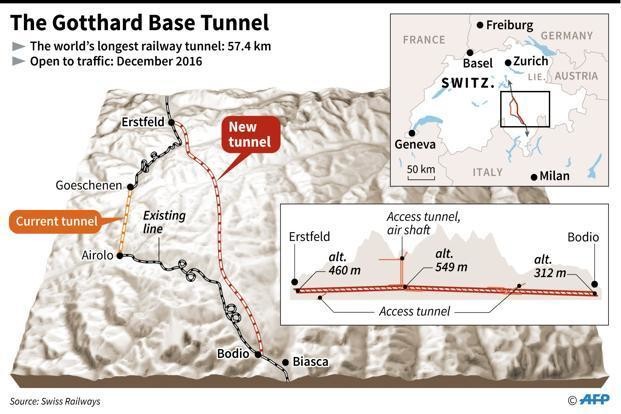 “It is just part of the Swiss identity,” federal transport office director Peter Fueglistaler explained to Reuters. “For us, conquering the Alps is like the Dutch exploring the oceans.”

The GBT overtook Japan’s Seikan Tunnel as the world’s longest underground railway passage. This in turn pushed the Channel Tunnel into third place.

The graphic below ranks the longest rail tunnels in the world, placing them in order: 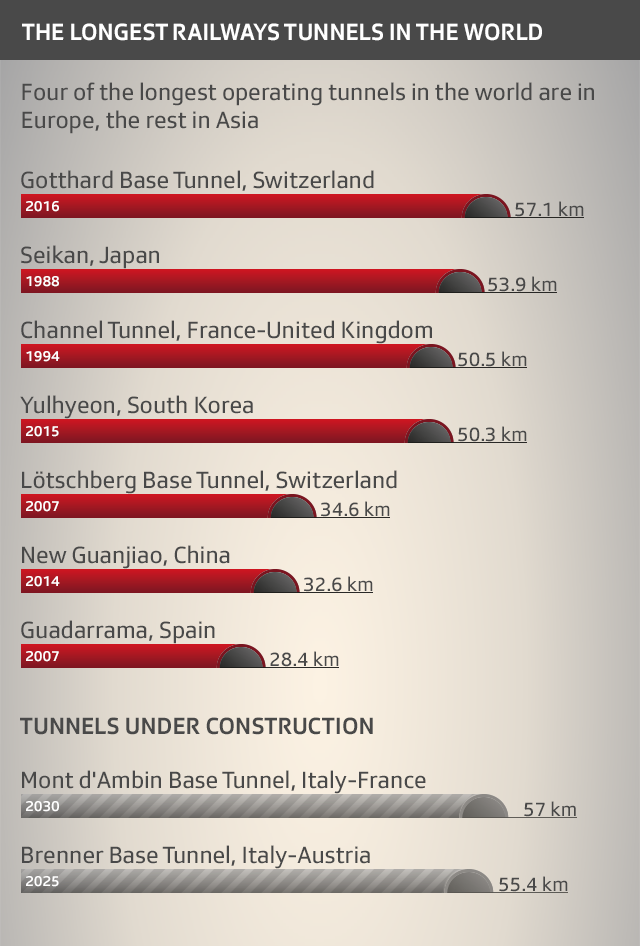 Seikan, in second place, is the oldest tunnel featured in the graphic, completed nearly three decades ago. Of its 54 km total length, some 23 km is under the sea. The tunnel connects Honshu and Hokkaido Islands in the north of Japan.

Linking France and the United Kingdom, Queen Elizabeth II and President Mitterrand opened the tunnel in 1994. At a final cost of £9 billion, more than 13,000 French and British workers collaborated to make the tunnel a reality.

The Yulhyeon Tunnel took just three and a half years to complete and is part of the Suseo High Speed Railway. The line connects Suseo Station in Seoul and Pyeongtaek 61.1 km to the south. Opened in the summer of 2015, the tunnel takes fourth place on the list. 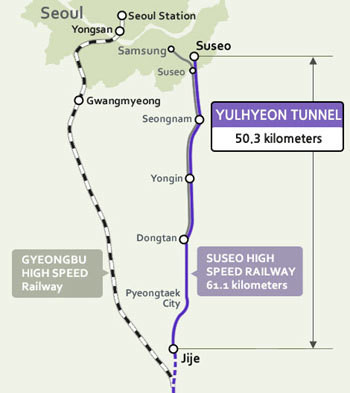 Another Swiss tunnel takes fifth place. One-third of the New Rail Link through the Alps (NRLA), alongside the GBT and the Ceneri Base Tunnel (due to open in 2020), the Lötschberg Base Tunnel opened in 2007.

A land-based tunnel through the Guanjiao mountains, it connects Xining and Golmud. It’s 32.6 km long and was opened in 2014.

At 28.4 km long, the Guadarrama rail tunnel is part of the Madrid-Valladolid line opened in 2007. Trains can travel through it at over 310 km per hour, significantly reducing travel times.

Retrieved from "https://www.designingbuildings.co.uk/wiki/The_longest_railway_tunnels_in_the_world"
Create an article