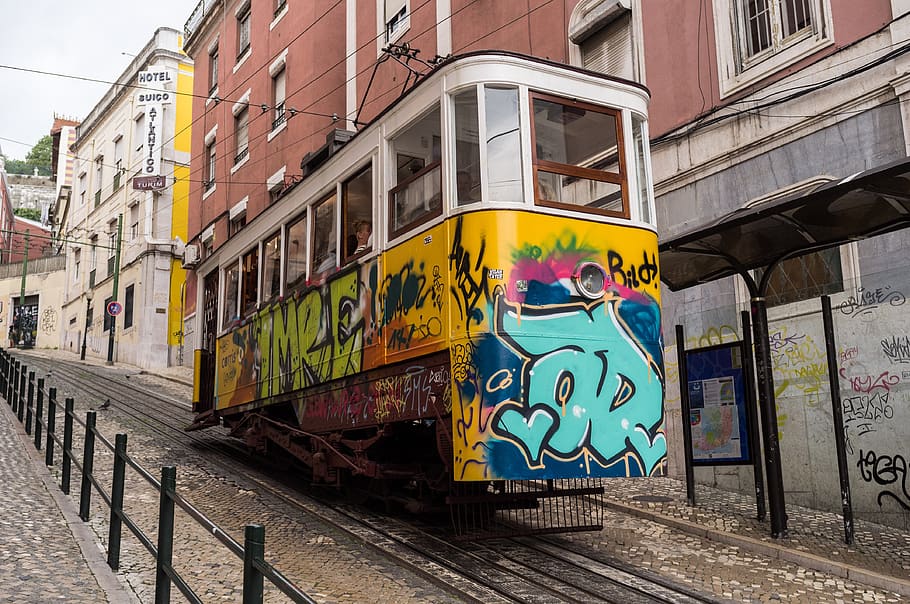 In the general sense, the term funicular relates to the use of a rope and its tension for different purposes. Funicular comes from the Latin word for rope or string, which is funiculus. The term is associated with several related concepts, including funicular railways and funicular forms.

This type of cable railway system (sometimes simply referred to as a funicular) is a form of transport that is often used at ski slopes or mountainous regions. It combines the concepts of an elevator (where technology uses a cable to move a carriage) with a train (where a carriage is moved along a track) to transport people (or objects) up steep inclines.

A funicular is sometimes referred to as an inclined plane railway or a cliff railway. On the incline, there is typically a single track to support the movement of two carriages. As the carriages approach each other, the track diverges into two separate tracks (or passing loops).

The movement of funiculars is controlled by a system of counter balanced carriages attached to each other with a cable. The haulage cable (or haul rope) is looped through a system of pulleys that reaches to the apex of the incline.

While the initial energy comes from a motor, neither carriage is equipped with an engine or motor (since the carriages counterbalance each other). This means one carriage moves downward safely as the speed of its descent is controlled by the weight of the other carriage moving upward. There is no great demand for new energy and lifting force to perpetuate the motion of the carriages.

Wheels under the carriages served to guide them on the tracks - they do not provide pulling power as they would with other types of railways. If the tracks are not entirely straight, the cable uses unpowered pulleys known as sheaves to guide it in the proper direction (or change direction completely) and the wheels follow the same path.

There is evidence of early funiculars dating to the 15th century. Some of these early devices used power generated by humans or animals to move the carriages.

Water was another method of operation. These devices moved as the level of water in reserve tanks filled and emptied. There are a few water powered funiculars still in operation.

While many funiculars are open, some have been built into overground tunnels. Others have been built for the purpose of providing descent into caves or mines below ground or to transport passengers for underground travel.

[edit] Funiculars in the UK

Funiculars have been used throughout the UK, with a number deployed in coastal areas. On the Isle of Man, funicular railways were used to support tourism in the mid-19th century, but none of these funiculars are still in operation.

Some noteworthy funiculars in the UK include:

Aviemore, Cairngorm Mountain Railway. The Cairngorm funicular was once the highest railway in the United Kingdom. It opened in 2001 but closed in 2018 due to structural issues.

Bristol, Clifton Rocks Railway. Built within a tunnel, this underground funicular was also water powered. It is situated near the Clifton Suspension Bridge but closed in 1934 due to lack of use.

Bournemouth, Fisherman's Walk Cliff Railway. At 39 metres (128 feet), this is believed to be the smallest public funicular in the world.

Kent, Leas Lift. This grade II listed, water-operated funicular was installed in 1885 and is in operation (as of 2021).

Machynlleth, CAT funicular. This water-balanced funicular opened in 1992 at the Centre for Alternative Technology (CAT), which is an organisation associated with sustainable living and development.

Funicular forms are the forms assumed by cables (or chains) under any given load.

Although funicular forms and catenary forms look very similar, they are mathematically different. In mathematical representation, the catenary uses a hyperbolic cosine while the parabola is far easier to represent with just a polynomial. Engineers may sometimes use the mathematics for a parabola when considering a catenary.

Retrieved from "https://www.designingbuildings.co.uk/wiki/Funicular"
Create an article