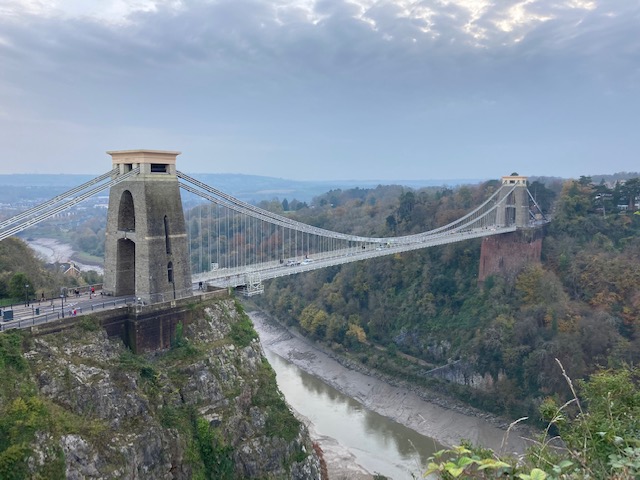 Clifton Suspension Bridge links Clifton in Bristol to Leigh Woods in Somerset spanning the River Avon and the Avon Gorge.

The Clifton Suspension Bridge was built between 1831 and 1864 based on an idea first proposed in 1753. Its completion 111 years later was hindered by financial constraints and political complications.

Initial funding for the project came from a deceased Bristol wine merchant named William Vick whose idea a bridge was. When he died in 1753, Vick left £1,000 in his will along with specific instructions to use the money (and the accumulated interest, once it reached a total of £10,000) to construct the bridge.

By 1829 the funds had grown to £8,000. While this was considered insufficient for the entire project (which was expected to cost as much as 10 times more), it was enough to prompt organisers to hold a competition for the best design. This resulted in 22 entries, including four submitted by Isambard Kingdom Brunel. Of the original designs, 17 were rejected on the basis of appearance, materials (Vick's will specified a stone bridge) or cost.

Scottish civil engineer Thomas Telford was brought in to make a selection from the final five entries, and rejected all of them. He then proceeded to produce his own design while additional funding was arranged.

After the Clifton Bridge Bill was enacted in 1830, planners were able to consider designs for a wrought iron suspension bridge (rather than the original plan for stone) that could generate funds through the collection of tolls. Still, the proposed design created by Telford was too expensive; so was a revised one from Brunel.

A second competition held in 1831 resulted in Brunel being awarded the contract as project engineer. It was his first significant commission; he was just 24-years-old at the time.

The start of construction took place in June 1831. Work stopped during the Bristol Riots, which occurred four months into construction. It resumed in 1836, but halted again in 1843. At this point, only one aspect of the project was complete and funding was exhausted.

Brunel’s original sphinx-topped towers had been scaled back into a rougher, simpler design. These were constructed on both sides of the gorge. Brunel also designed a device known as ‘the suspended traveller’ (an iron bar and basket) to draw materials and personnel from one side of the gorge to the other during construction.

Work on the bridge would not resume again until 1862. During his lifetime, Brunel would describe the bridge as 'my first child, my darling’. However, he died in 1859 - five years before its completion.

Funds for the continuation of work were raised with help from the Institution of Civil Engineers (ICE). Although Brunel’s colleagues at ICE felt this would be an appropriate memorial to his achievements, some changes were made to his original design. Sir John Hawkshaw and William Henry Barlow worked together to come up with modifications that included widening the road and increasing the number of suspension chains (from two to three). 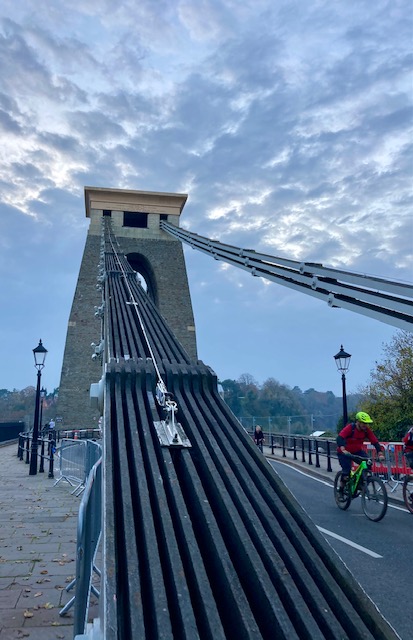 Modern computer analysis shows that his calculations for the joints between the wrought iron links that make up the bridge's chain were nearly perfect in terms of accommodating the weight they were required to support.

Work restarted 1862 under the supervision of Hawkshaw and Barlow and was completed in 1864.

The Clifton Suspension Bridge is now a Grade I listed structure, recognised for its achievements in engineering. Despite the delays, it is considered by some to be one of the most significant projects built during the Victorian era.

There are several noteworthy details about the bridge. 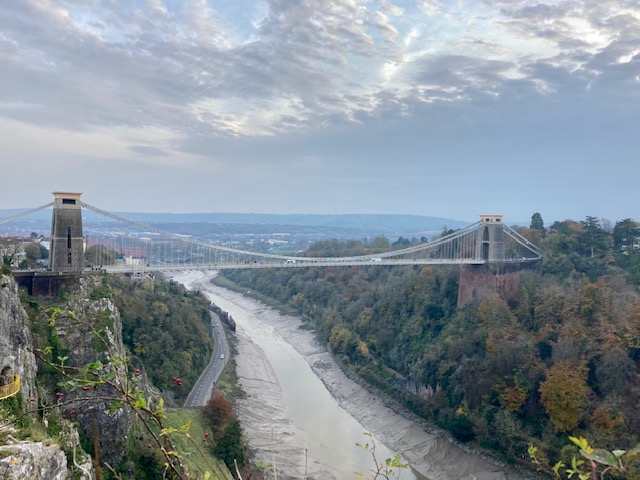 This image shows how the Clifton tower (left) differs from the Leigh Woods tower (right).

[edit] Legends of the bridge

Folklore associated with the bridge includes the story of a heartbroken young woman named Sarah Ann Henley who attempted suicide by jumping from the bridge in 1885. According to the tale, her effort was thwarted by her voluminous skirts and weather conditions. Her skirts were lifted by strong gusts of wind, which served to parachute her safely to the muddy banks of the River Avon. Although a cabman refused to take her to hospital due to her dirty condition, she was eventually examined by medical professionals who said she was unharmed, although suffering from shock. She later married another suitor and died in 1948 at the age of 85.

The Clifton Suspension Bridge is also associated with the English engineer and inventor, Sarah Guppy (5 November 1770 – 24 August 1852). As the first woman to patent a chain bridge, Guppy came up with her version in 1811. Guppy's design was never executed and is not thought to have had any impact on Brunel's plans for the Clifton Suspension Bridge. However, her son, Thomas Guppy, did work with Brunel on the SS Great Britain and other projects.

Retrieved from "https://www.designingbuildings.co.uk/wiki/Clifton_Suspension_Bridge"
Create an article