Crossrail 2 is a proposal for a high-frequency, high-capacity rail line across London, from north to south, into Surrey and Hertfordshire. It is expected to open in the early 2030s.

London is projected to grow by two million people by the early 2030s. Transport for London (TfL) and Network Rail are promoting Crossrail 2 as a key project necessary to support London's long-term growth. It replaces an earlier scheme known as the Chelsea-Hackney line.

TfL suggest that Crossrail 2 will:

The projected cost is £12-20bn at 2012 prices. It is expected to be funded in a similar way to Crossrail 1, from sources including; Transport for London, the Greater London Authority (GLA), Network Rail, the Department for Transport and private sources with London businesses contributing in the form of the Crossrail Business Rate Supplement and the property industry contributing through the Community Infrastructure Levy.

In 2009, TfL undertook a review of the need for a new rail line and concluded that there was a need for a new north east – south west line. A large number of options were assessed, two of which were selected for further development:

A 2013 consultation found strong support for the idea of Crossrail 2 and suggested greater support for a Regional option:

A subsequent consultation in 2014 focused on three specific areas of the route:

A preferred route was identified by the Mayor of London Boris Johnson in October 2018. 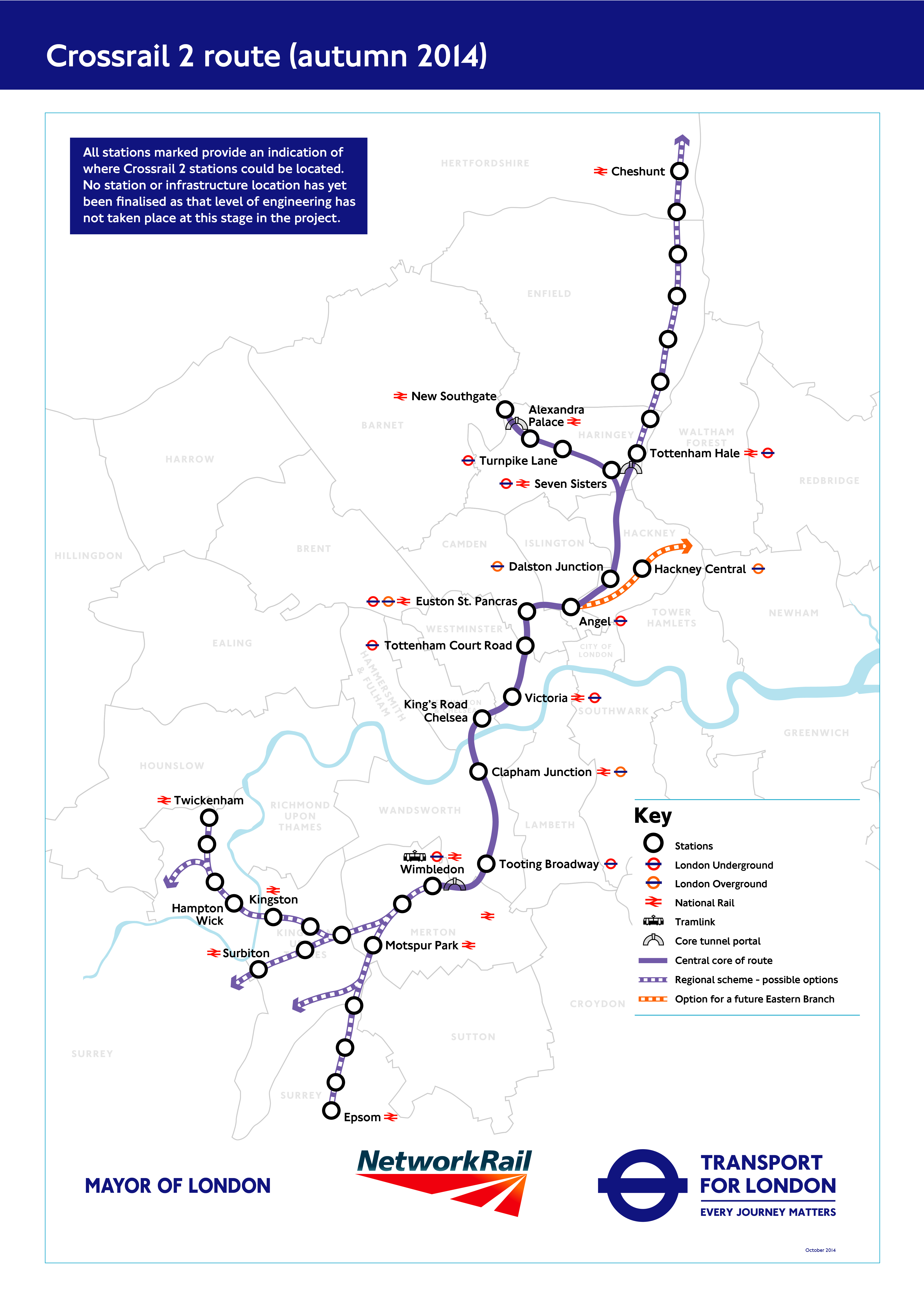 “Crossrail 2 is a vital project not just for the capital, but also for the regions from which people travel in to London on packed trains each day of the week. With London’s population soon to surpass its previous 1939 peak of 8.6m, and with more people travelling by Tube and rail than ever before, we need additional rail capacity to support future growth.” Ref GLA Crossrail 2 vital to support London’s growth, says Mayor 28 October 2014.

The proposed next steps are:

In May 2015, it was announced that Lord Adonis, chair of the National Infrastructure Commission had been appointed chair of Crossrail 2.

In January 2016, Surrey County Council suggested the line should extend as far as Woking and Dorking, whilst Hackney Council demanded a rethink over the station in Dalston.

On 10 March 2016, the National Infrastructure Commission published a report 'Transport for a world city' in which it suggested Crossrail 2 should be taken forward as a priority, funded to develop the scheme fully with the aim of submitting a hybrid bill by autumn 2019. This would enable Crossrail 2 to open in 2033.

In July 2017, the Transport Secretary Chris Grayling pledged his support for the project and his intention to work with the Mayor of London Sadiq Khan to identify an affordable funding package, with London paying half the £30bn costs. While London had already committed to meeting half the cost in the long term, this new announcement means the city may have to find ways of funding its half during construction.

Grayling said; “I am a supporter of Crossrail 2 but given its price tag we have to ensure that we get this right. The mayor and I have agreed to work together on it over the coming months to develop plans that are as strong as possible, so that the public gets an affordable scheme that is fair to the UK taxpayer."

The announcement of the new public consultation was criticised by some for coming only a week after the government shelved its country-wide rail electrification guarantees; leading to accusations that it is abandoning its ambition to rebalance the economy.

In January 2018, Crossrail 2 appeared to be set for fresh delays after Transport for London (TfL) commissioner Mike Brown said he did not expect consultation to begin until the end of the year. A report submitted in October 2017 stated that for the project's hybrid bill to be submitted in January 2020, the planning consultation would need to begin in early 2018.

The postponing of the consultation could place the submission of the hybrid bill in jeopardy. For it to complete its second reading in Parliament before the 2022 General Election, it will need to be submitted as soon as possible. An independent review of the project's funding and financing is due to begin, but it is expected that this will take several months to report.

In October 2020, Mayor of London Sadiq Khan agreed a bail out for TfL worth approximately £1.8bn to keep services running. However, a condition of the deal was that "Crossrail 2, prioritises safeguarding activity and brings an orderly end to consultancy work as soon as possible."

Khan said: “This is not a perfect deal, but we fought hard to get to the best possible place. The only reason TfL needs Government support is because almost all our fares income has dried up since March as Londoners have done the right thing.”

Retrieved from "https://www.designingbuildings.co.uk/wiki/Crossrail_2"
Create an article