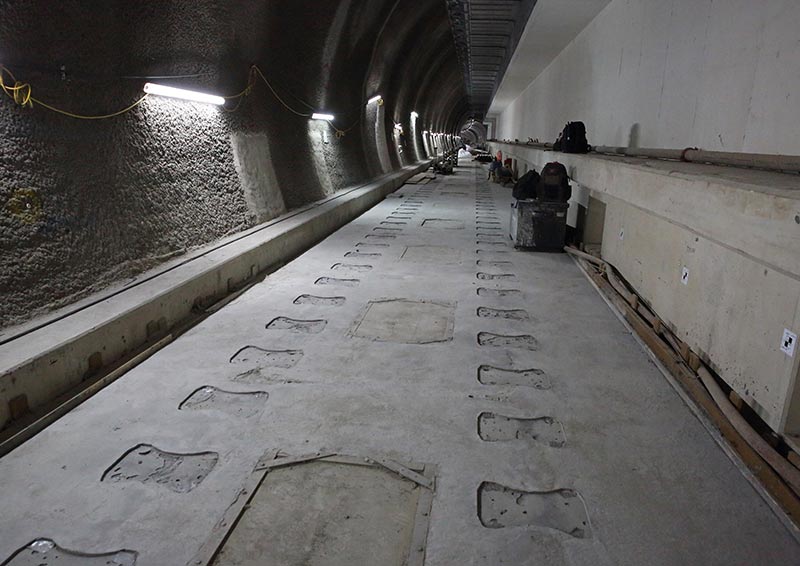 In 2011, we were asked if Camfaud could pump heavyweight concrete through 500 m of 125 mm pipeline? Being honest, we said we didn't know and being foolhardy we added that we would give it a go.

That question was asked at the design stage of the Crossrail project when Arup was trying to solve the potential problem of noise and vibration being transferred from the track slab to the Barbican performing arts centre.

We gave it a go and to everyone’s delight and relief the concrete that went into the hopper of our Schwing concrete pump duly came out of the end of the pipeline into the test shutter.

Fast forward to 2015, and we were asked a very similar question. Can you pump heavyweight concrete through 900 m of 125 mm pipeline? This time we were a bit more confident in our reply: we think so and we’ll be more than happy to try.

The question this time came from the successful bidder for the Crossrail C610 contract, Alstom Transport, TSO and Costain, more commonly known as ATC JV.

Before the FTS construction began we worked closely with Crossrail, ATC JV, London Concrete, who had won the contract to supply the concrete, and LKAB Minerals, supplier of the heavyweight aggregate.

After extensive laboratory and batching plant trials the material was put to the test in a series of three pumping trials. These were conducted through increasing pump line lengths: 130 m, 500 m and finally 900 m.

Each of the trial pours was a success with the equipment being equal to the task and the material holding together under pressure without segregating or settling out in the pipeline during delays in the pumping.

Also tested during the pumping trials was Camfaud’s water washout system. On the 900 m pumping trial the pipeline contained 11 m3 of heavyweight concrete weighing 40 tonnes. We aimed to use as much of this concrete in the pour to minimise waste, reducing environmental impact and also the overall cost of the contract. The water washout worked as planned and so was adopted into the pumping scheme.

The success of the trials brought us a contract for the project and so we set about augmenting our static pump fleet and putting together a crew of experienced operators and linesmen.

Each pumping station included the water washout system with a dedicated washout pump to push the line clear of material, most of it being used to finish the pour with only a small amount pumped to waste. The water was then blown back to recycling tanks on the surface, treated and used for the next cleaning cycle.

After the trials and the early pours our confidence grew that we would complete the contract even with a few pours at or around our previous record distance of 900 m.

Due to programme changes the operation at Bond Street was extended. This led to the question: can you pump heavyweight concrete through 1,000 m of 125 mm pipeline? Without hesitation, we replied: of course we can.

This article was originally published here by ICE on 13 Sept 2017. It was written by Andrew Turner, Area Manager, Camfaud Concrete Pumps.

Retrieved from "https://www.designingbuildings.co.uk/wiki/High-density_floating_track_slab"
Create an article