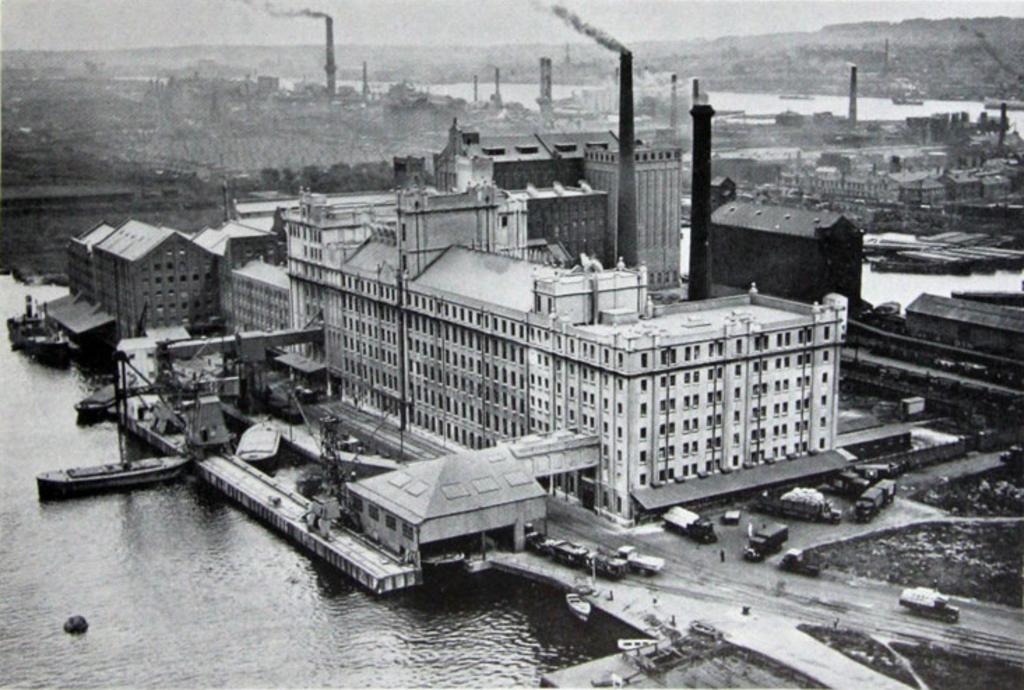 Millennium Mills is a derelict industrial building in the Silvertown area of London's docklands. Once described as the Battersea Power Station of the Royal Docks, it is the centerpiece of a substantial £3.5 billion redevelopment project by The Silvertown Partnership. Once complete, the area will include a new commercial hub, new homes, leisure and culture facilities, parks and green spaces and 1km of new water frontage.

The Greater London Authority appointed The Silvertown Partnership in 2012 as the preferred development partner, consisting of Chelsfield Properties Ltd, First Base Ltd and Macquarie Capital.

Due to its rail and water links, the Royal Victoria Dock became a key transport hub for industrial Britain in the first half of the 20th century. The mills had transformed the area into London’s largest centre for flour milling. The original Millennium Mills building was designed and built in 1905 by William Vernon & Sons. Consisting of two plants, the ‘palatial’ mills, as William Vernon described them, were capable of producing 100 sacks of flour an hour.

The mills were badly damaged in 1917 by a major explosion at Brunner Mond’s munitions factory that was manufacturing explosives for use in the First World War. The explosion was so powerful that it blew out the windows of the Ritz in West London and could be heard as far away as Norfolk.

In 1933, Millennium Mills was rebuilt as a 10-storey art deco concrete building. The docklands came under heavy attack during the Blitz of the Second World War, with considerable damage sustained by both Millennium Mills and the Rank’s neighbouring Premier Mills building. After the war, the ports underwent large-scale reconstruction, with the new building being operational by September 1953. 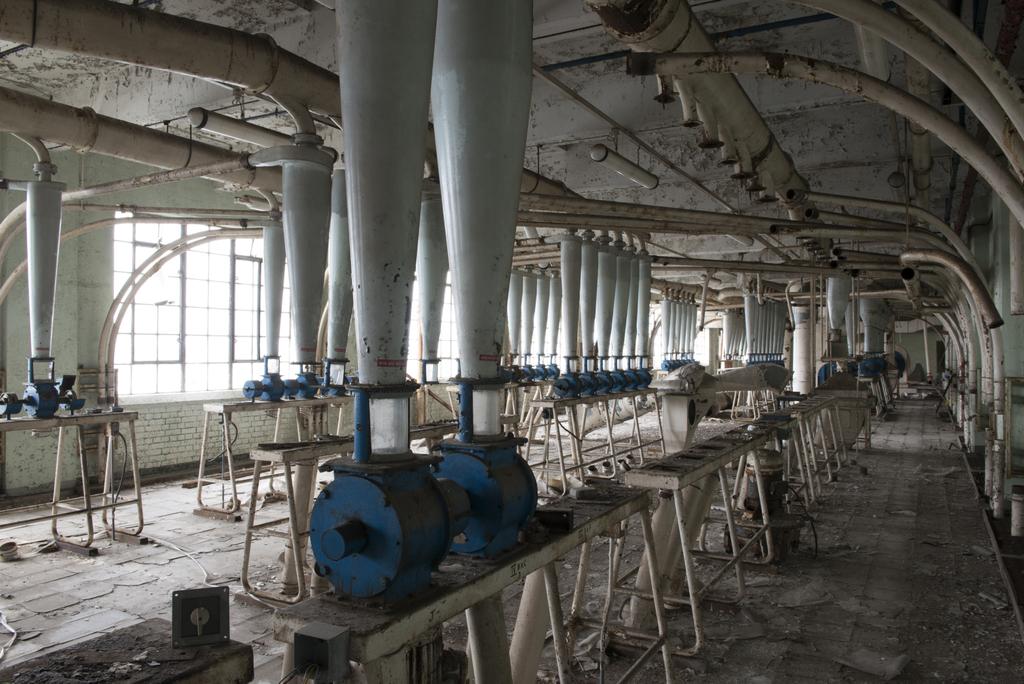 In the early 1980s, along with most others in the Royal Docks, the mill was closed, a symbol of the gradual decline of Britain’s industrial strength. Since then the building has remained derelict.

In the 1990s, the London Docklands Development Corporation (LDDC) demolished the Rank Mills, as well as the B and C silos of Millennium Mills, leaving D silo which was awarded Grade II-listed status. For a time, the LDDC planned to convert the building into a public aquarium but was unable to find funding for the project. 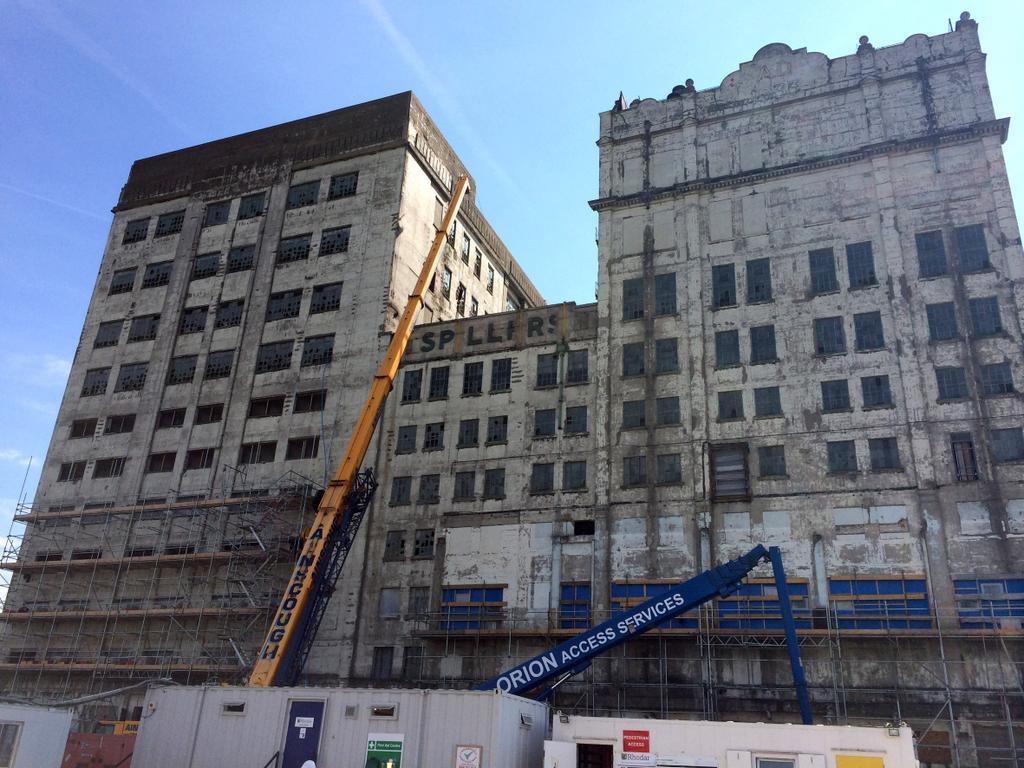 In the time since its closure, the building has become something of a post-industrial icon of London, popular with artists, film makers and ‘urban explorers’. It was featured prominently in Terry Gilliam’s dystopian film ‘Brazil’, as well as Derek Jarman’s ‘The Last of England’, which prompted the writer Iain Sinclair to describe it as ‘…looking as if it had been christened by William Blake and delivered by Albert Speer’. More recently the building has been used in Danny Boyle’s ‘Trance’ and in the TV series ‘Ashes to Ashes’.

In 1988, the electronic music artist Jean Michel Jarre used the site as the backdrop for his live project ‘Destination Docklands’. It has also been used in music videos by the likes of The Smiths, Orbital, Arctic Monkeys, Snow Patrol, and Coldplay. 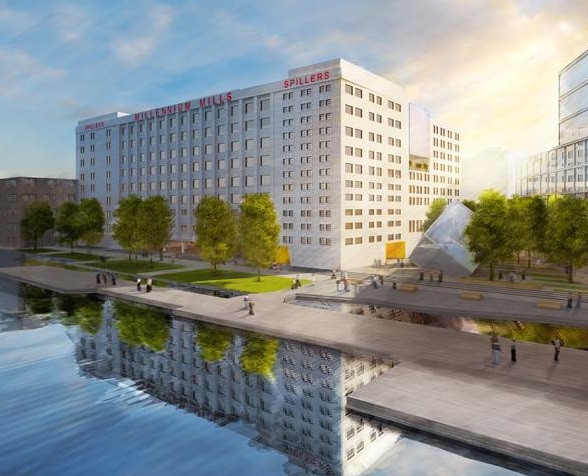 After a protracted and failed redevelopment proposal in the 2000s, Newham Council awarded planning permission to The Silvertown Partnership in 2015.

According to developer, Sir Stuart Lipton, the 62-acre site will reinvent the concept of the ‘atelier’ on a grand scale – ‘creating a place where people who make things show and share them, driving new ideas and innovation on a major scale.’

It is hoped that Silvertown will become the first purpose-built business destination in the world, offering a canvas for entrepreneurial and exciting start-up companies to create ‘truly special experiences’ for their customers. A new type of work/life ecosystem will be created that will encourage wellbeing and use innovations in ‘smart building’ technology and collaborative working spaces.

The Partnership expects the development to create:

Work began in January 2015 to clear the building of asbestos, following an initial £12m grant from the government. 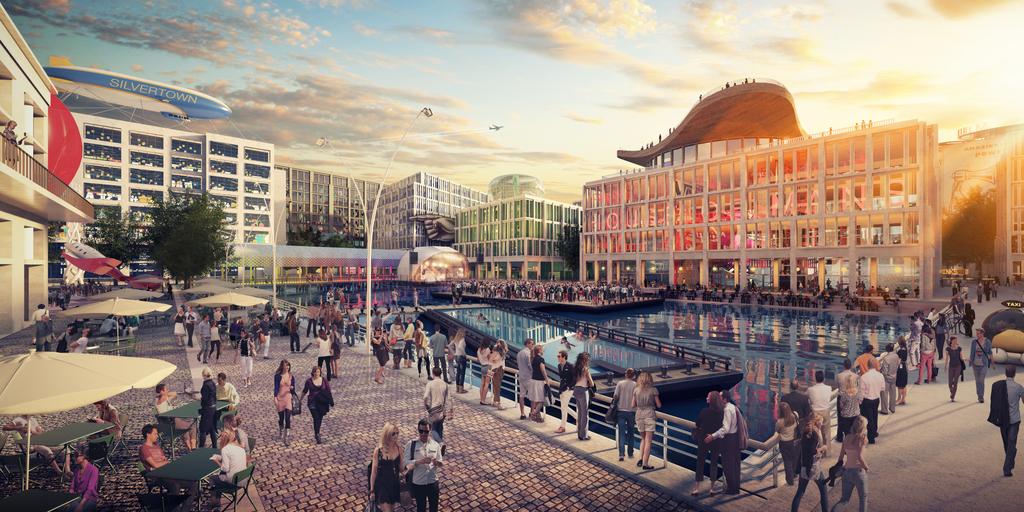 Information and images for this article courtesy of Silvertown London.

In June 2018, Lendlease and Starwood announced plans for the acquisition, subject to pre-completion conditions, of The Silvertown Partnership which holds development rights to the project.

Dan Labbad, Chief Executive Officer, International Operations, Lendlease said: “London is universally recognised as one of the world’s most exciting cities. In order to maintain its rich mix of cultures and people, the city must continue to deliver projects like Silvertown Quays. Working in partnership, we plan to create a place that’s innovative and environmentally sustainable, and will provide tangible benefits for the local community for the long-term. These are standards and commitments we apply to all our work and Silvertown Quays is no exception.”

Retrieved from "https://www.designingbuildings.co.uk/wiki/Millennium_Mills"
Create an article