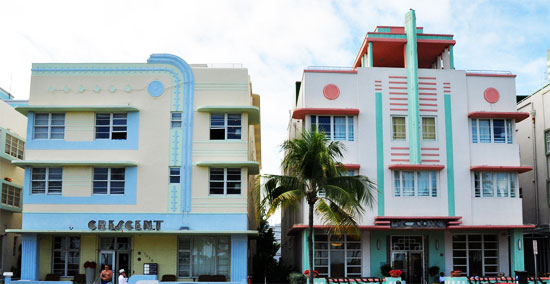 Art Deco is a modernist architectural style that flourished in the mid-1920s through to the early-1930s. As well as having a significant influence on architecture, it also extended to fashion, art, sculpture, jewellery and furniture. It is characterised by its distinctive sharp-edges and stylised, geometric, decorative details.

Despite examples being evident in Europe and South America, Art Deco is seen as being synonymous with the American architecture of the time, being the first movement to break from the preceding Revival styles and embodying the ideas of the modern age.

Art Deco first came to public attention in 1922 when Finnish architect Eliel Saarinen entered a design competition for the Chicago Tribune Headquarters. Although it didn’t win, the style was widely publicised as being new and exciting.

This view became widespread after the 1925 Exposition Internationale des Art Decoratifs in Paris, a showcase for innovative new design ideas. The style focused on applied decoration and the embellishment of buildings with hard-edged, low-relief designs, as well as geometric shapes such as chevrons and ziggurats, inspired by Native American artwork as well as Egyptian, Babylonian and Assyrian archaeology.

However, it provoked criticism from proponents of modernism such as the Bauhaus movement and Le Corbusier, who viewed Art Deco as vulgar escapism that followed the whims of fashion rather than being rooted in functional realism.

Nonetheless, Art Deco began to grow in popularity and became a commonly adopted style for buildings such as theatres, cinemas, commercial buildings, government buildings, apartments, industrial complexes, and the the emerging building form of the age - the skyscraper.

The main characteristics of Art Deco architecture are its sleek, linear, often rectangular geometric forms, arranged and broken up by curved ornamental elements. A series of set-backs creating a stepped outline help create the monolithic appearance of typical of Art Deco façades.

While some buildings featured hand-crafted elements, others made do with repetitive machine-made decorations that were less expensive. Such details could incorporate artistic or exotic motifs according to the function of the building or the preferences of the architect.

Flat roofs were often adorned with parapets, spires, or tower-like constructions to accentuate a corner or entrance, and decorative chimneys were also commonly added.

Windows were often arranged in continuous horizontal bands of glass to maintain a streamlined appearance and were frequently square or round openings with embossed spandrel panels placed below them. Decorative glass or glass blocks were used for wall openings as a means of maximising natural light and providing a contrast between solid and void forms.

Elaborate pilasters and pediments were used to decorate doorways, and the surrounds of doors were sometimes decorated with convex reeding or concave fluting.

Perhaps the environment most commonly associated with the Art Deco style is Old Miami Beach, Florida which boasts around 800 such structures.

Some other well-known examples of the Art Deco style are:

Retrieved from "https://www.designingbuildings.co.uk/wiki/Art_Deco"
Create an article