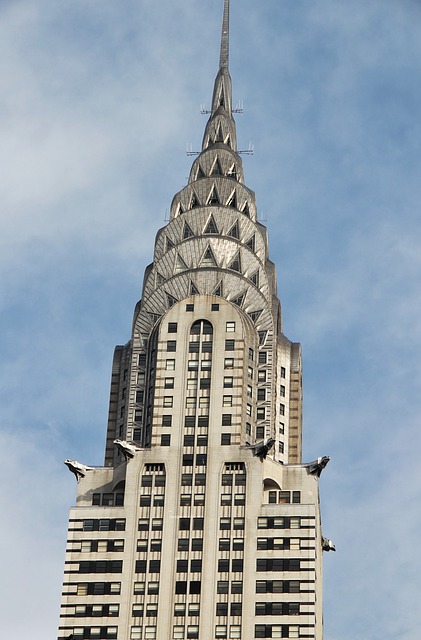 The Chrysler Building is a classic Art Deco skyscraper located in the East-Midtown area of Manhattan. At 319.5 m (1048 ft) high, the building held the title of the world's tallest building when it was completed in 1930. However, this was only to last 11 months before being surpassed by the Empire State Building in 1931. Nonetheless, it was the first man-made structure taller than 1,000 ft, and is still the tallest brick building in the world (albeit having an internal steel skeleton).

The building was conceived by architect William Van Alen and contractor William H. Reynolds. Van Alen's original design comprised a decorative 'diamond' crown and showroom windows. The ambition of such a design proved too expensive for Reynolds who sold the lease to the industrialist Walter Chrysler. Chrysler wanted to rejuvenate the East 42nd Street area and commissioned Van Alen to redesign the building in a drive to making it the tallest in the world.

This ambition was kept a secret. 40 Wall Street was being built simultaneously and it was believed it would secure the title of world's tallest. The additional 185 ft spire was delivered to site and erected in 90 minutes, surpassing 40 Wall Street just as the project team celebrated without realising they had been beaten.

The Chrysler Building is seen as a leading example of Art Deco architecture, and is distinctive due to its terraced crown and ornamentation based on the Chrysler automobile designs of the time. The crown was designed by Van Alen as seven terraced arches that make up a cruciform groin vault built into seven concentric members mounted one behind the other with transitioning setbacks.

The corners of the 61st floor are decorated with protruding gargoyles that depict American eagles in homage to the hood ornaments of the Plymouth automobile, while the corners of the setback 31st floor feature replicas of the 1929 Chrysler radiator caps.

The building, with its stepped spires, is constructed using masonry with a steel frame and stainless-steel cladding. The cladding is ribbed and riveted in a radiating sunburst motif with triangular vaulted windows. The crown is clad in a silver austenitic stainless steel manufactured in Germany.

The bricks were hand-laid, but with the construction being carried out very quickly – at an average of four floors a week.

Inside, the building is known for its lavish lobby area, decorated with onyx, steel, red Moroccan marble walls and sienna-coloured floor. The artist Edward Trumbull painted the murals on the ceiling.

The building served as the headquarters of the Chrysler Corporation from 1930 to 1957 when it was purchased by real estate moguls Sol Goldman and Alex DiLorenzo. It was later sold to the Massachusetts Mutual Life Insurance Company who refurbished the façade and renovated the building in 1978. In 2008, the Abu Dhabi Investment Council purchased a 90% stake in the building.

In 1976, the Chrysler Building was declared a National Historic Landmark. In 2005, New York's Skyscraper Museum conducted a survey of prominent construction experts and found that 90% chose the Chrysler as their favourite skyscraper in New York. In 2007, the building was ranked ninth on the list of America's Favourite Architecture by the American Institute of Architects.

It has featured in numerous film and TV productions; most notably, 'Godzilla', 'Armageddon', 'Deep Impact', 'Fantastic Four: Rise of the Silver Surfer', 'Sex and the City' and 'Spider-Man'. 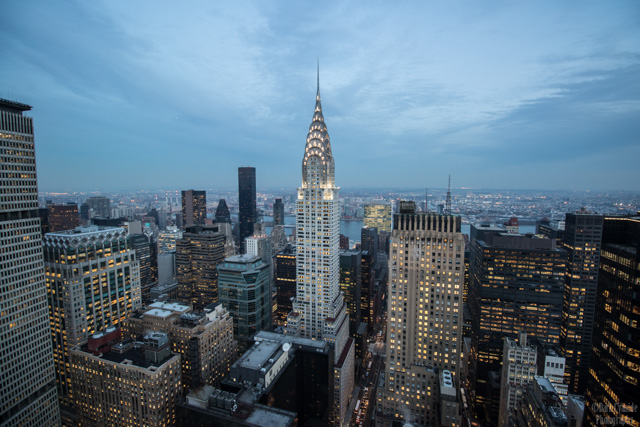 Why can you people not credit the photographers who took the images you use?
It's both unethical and make the images unusable to anyone who might need them for academic purposes.

Generally if you click on images you will find they are attributed on the image details where such details are available. However, this is a wiki site, and often images are added by users that we have no control of.

Some images are available under licences that do note require attribution. A reverse image search will general tell you the original source of such images.