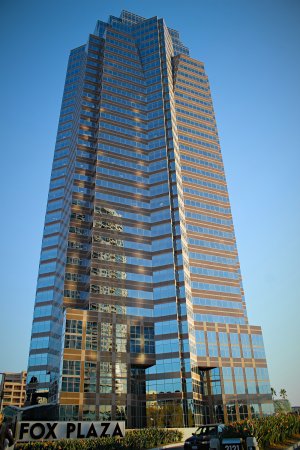 Fox Plaza is a post-modernist skyscraper in Century City, Los Angeles, California. It is the official headquarters of the film production company Twentieth Century Fox. At 35-storeys and 150 m (492 ft) high, it is the fourth tallest building in the large business district of Century City.

The building was designed by architects Scott Johnson, Bill Fain and William Pereira. Construction work began in 1985 and was completed in 1987, shortly before it featured prominently as Nakatomi Plaza in the classic action film ‘Die Hard’ starring Bruce Willis.

The building is situated on a promontory site on the northeast corner of 20th Century Fox’s six-acre film lot. It was thought that this location would provide the building with the opportunity to stand out and assert itself upon the Century City skyline. The architects set about their design with the intention of heightening the visibility of the building, differentiating it from the other more traditionally modernist skyscrapers in the immediate area.

The design focused on the strong faceting of salmon Finnish granite and grey-tinted glass, to create multiple planes that would reflect light most effectively. As a result, it has 16 corner offices on most of the floors, offering panoramic views of the Los Angeles basin, the Hollywood Hills and the ocean.

The building is also notable for being the first in Southern California to incorporate a central fresh-air tunnel into its design, based on the Venturi tube principle, in which stale air is extracted from all floors. This form of stack ventilation uses air pressure differences due to height to pull air through and out of the building.

The upper 7 floors were designed with 10-foot ceilings, and the building includes a six-level parking structure for over 1,800 cars, together with enclosed access via elevators and escalators.

Fox Plaza cost $200 million to build, and created 650,000 sq. ft. of rentable commercial office space. The former US President Ronald Reagan had offices on the 34th floor for several years after leaving the White House.

The building is most widely known for playing the part of Nakatomi Plaza in the 1988 action film ‘Die Hard’, in which the building was targeted by terrorists on the night of Christmas Eve. Filming was undertaken whilst parts of the building were still under construction. The scenes of the building’s destruction were filmed using a scale model.

It has also featured in the films ‘Airheads’, ‘Speed’ and, depicted as being destroyed again, at the end of ‘Fight Club’.

Retrieved from "https://www.designingbuildings.co.uk/wiki/Fox_Plaza,_LA"
Create an article