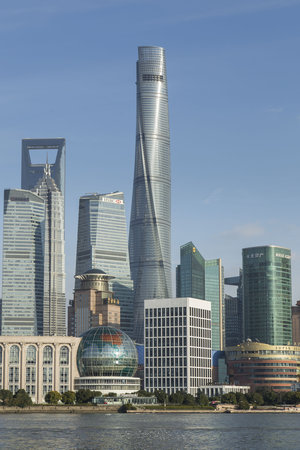 The Shanghai Tower is a skyscraper located in Shanghai’s Lujiazui financial district. When it was completed in late-2015, it was the second tallest building in the world, becoming the third to achieve ‘megatall’ status (over 600 metres). It has won praise for being one of the most sustainably advanced tall buildings in the world and incorporates a number of ‘green’ architecture elements.

At 632-metres it is China’s tallest building, surpassing Guangzhou’s Canton Tower which was completed in 2010 and stands at 600-metres.

Architectural practice Gensler designed the tower to ‘embrace and stimulate the life of the city’. The tower has a curved and twisted form which makes a 120-degree rotation from base to top, the first of its kind in the world.

The tower has 123 storeys and is divided into nine vertical zones, including:

It was officially opened in January 2016.

In November 2016, the tower won the 2015 Emporis Skyscraper Award. Selected from over 300 buildings of over 100 m in height completed in 2015, the jury was impressed by the Shanghai Tower's 'elegant spiraling cylindrical shape', and the 'extraordinary energy efficiency' provided, in part, by the building's double-skin facade.

Since 1993, the Lujiazui financial district had been planned to include three ‘supertall’ skyscrapers. The first, Jin Mao Tower was completed in 1999, followed by the Shanghai World Financial Center in 2008.

The Shanghai Tower was funded by a combination of shareholders, bank loans and Shanghai’s municipal government. It is owned by a consortium of state-owned development companies under the title ‘Shanghai Tower Construction and Development’. The estimated cost of the tower was $2.4 billion.

The innovative design for the tower had to be planned to contend with the challenges of a windy climate, an active earthquake zone and clay-based soils.

The main idea behind Gensler’s design was that the tower provided an alternative to parks spread horizontally across the city. Instead, gathering spaces are stacked vertically, with ‘sky lobbies’ separating the different zones designed, by being naturally-lit plant-filled atriums, to conform to the social environments of town plazas and courtyards.

To combat Shanghai’s common typhoon-force winds, the tower was designed to have an asymmetrical form, a tapered profile and rounded corners. After wind tunnel testing, the tower’s form was refined which led to a 24% reduction in structural wind loading when compared to a rectangular building of comparable height. This meant the structure as a whole was lighter and materials savings of $58m were made.

The unique building shape required more than 20,000 curtain wall panels, with more than 7,000 different shapes. The fabrication of so many individual components would have been unfeasibly complex and costly using traditional computer-aided design tools, but with parametric software and laser measuring technology, a ‘mass customisation’ process was possible.

The tower is built on a 6-metre deep mat foundation that was poured with 61,000 cubic metres of concrete during a continuous 63-hour pour. A strong concrete core and steel supercolumns support the tower, whilst ‘branches’ extend out at the base of each zone, marking the division of the building into nine cylindrical sections. A 1,000-metric-ton tuned mass damper is positioned near the top of the tower to counteract sway.

The transparent second skin that wraps the entire building allows in maximum daylight, while acting as an insulating blanket to conserve energy. This warms up the cool external air in winter and dissipates heat from the interior in summer. The double curtain wall is suspended on massive cantilevered trusses, and made stable by the use of hoop rings and struts.

As well as the glass skin, the tower’s energy efficiency credentials are boosted by the fact that one-third of the site is green space, by the employment of a trigeneration system (the use of a heat engine to generate electricity, cooling and useful heat simultaneously), and a grey water/rainwater system. The exterior lighting for the tower is powered by 270 wind turbines that are built into the façade.

The tower includes express elevators capable of taking passengers up to the observation level at over 18 m/sec (40 mph).

In May 2016, the Mitsubishi Electric Corporation announced that it would be installing its new elevator technology which had achieved a speed of 1,230 m/min, or 20.5 m/sec, the fastest elevator speed ever recorded.

The lift will be able to carry people from the second-level basement to the 119th floor in just 53 seconds.

Mitsubishi said that the record-breaking speed was achieved through the development of new equipment, including a control panel to maximise the traction-machine’s performance, and improvements to the speed governor, brake device and buffer.

Retrieved from "https://www.designingbuildings.co.uk/wiki/Shanghai_Tower"
Create an article