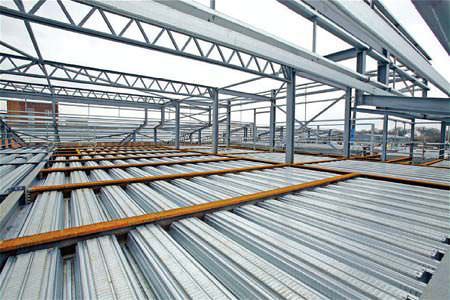 In its traditional usage in shipping the term deck refers to the uppermost, horizontal, working level of a ship. Similarly in construction the term ‘deck’ refers to a horizontal platform but may relate to a range of different applications.

A building under construction may have a deck if, for example, profiled metal permanent formwork is in position awaiting the pouring of concrete. In such a state, the metal formwork may be referred to as a deck, not a floor. However, once the concrete is poured and a continuous horizontal surface is created, it is no longer referred to as a deck but sa a floor.

A raised floor in a garden or patio, usually in timber and abutting or close to the house, is frequently referred to as a ‘deck’ or ‘garden deck’. These are usually constructed to create a platform for leisure use, e.g sitting, dining etc and may form a continuous level with the ground floor of the house.

In a flat-roofed building, the platform that covers the building (and caries the weatherproofing measures) may be referred to as the ‘roof deck’.

This is a floor or protrusion at high level that allows people to get high-level views of the surrounding area.

This is a raised platform that enables helicopters to take-off and land.

The upper horizontal surface of a bridge which carries road and/or rail traffic is frequently referred to as the ‘deck’. It will be supported by the main structural elements of the bridge, whether trusses, arches, suspension cables etc. The deck may be finished with a road surface, rail tracks and so on.

Some bridges have two decks and are referred to as ‘multi-deck’ or ‘multi-level’ bridges. Both decks may be for road traffic or one might be for rail. Typical of this genre is the High Level Bridge (1847-1849) in Newcastle-upon-Tyne which has two decks: the upper level carries a railway line while the lower carries the B1307 road.

Some bridges such as the Meridian Highway Bridge in the USA have two decks for pedestrians only.

Retrieved from "https://www.designingbuildings.co.uk/wiki/Deck"
Create an article