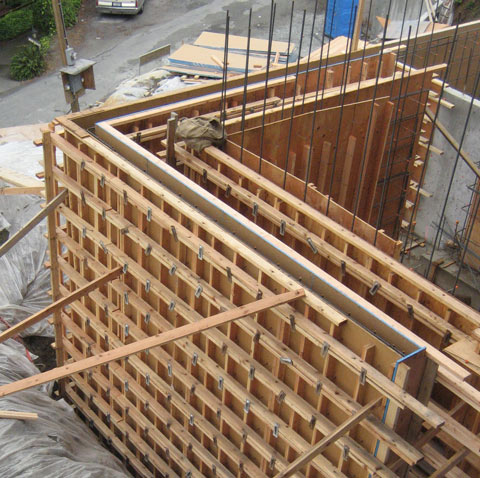 Formwork is the term used for the process of creating a temporary mould into which concrete is poured and formed. Traditional formwork is fabricated using timber, but it can also be constructed from steel, glass fibre reinforced plastics and other materials.

While formwork is a broad term that is used in relation to the forming process using a wide variety of materials, shuttering is a term that is often used to refer to the process of using plywood to form the mould.

Shuttering is perhaps the most popular type of formwork and is normally constructed on site using timber and plywood. A special grade of plywood is necessary for shuttering, and it must be water-resistant. It is easy to produce, although it can be time consuming for larger structures. It is used when the labour costs are lower than the cost of producing re-usable formwork from materials such as steel or plastic. It also has the advantage of being at a significant amount of concrete can be poured at once.

Simple plank shuttering can be used for the construction of a path or hardstanding. The planks should be trimmed so they are level with the top surface of the slab, allowing a tidy concrete finish to be achieved.

When selecting formwork, the type of concrete and temperature of the pour are important considerations as they both effect the pressure exerted.

The formwork sides must be capable of resisting the hydrostatic pressure of the wet concrete which will diminish to zero within several hours depending on the rate of setting and curing.

Once the concrete has gained sufficient strength the formwork can be struck (removed). A minimum value of 5 N/mm2 is recommended in all cases when striking vertical formwork as so not to damage the permanent concrete in the process.

High quality workmanship and inspection are necessary to ensure a high standard and appearance of the resulting concrete structure.

Both shuttering and formwork in its various forms will be supported by falsework. This refers to poles, stabilisers, or other units that keep the shuttering or formwork in place as the concrete dries. For more information, see Falsework.

Formwork for beams takes the form of a three-sided box which is supported and propped in the correct position and to the desired level. The removal time for the formwork will vary with air temperature, humidity and consequent curing rate. Typical striking times are as follows (using air temperature of 7-16 ºC):

This consists of a vertical mould of the desired shape and size of the column to be poured. As a means of keeping the formwork material thickness to a minimum, horizontal steel or timber clamps (or yokes) are used at equal centres for batch filling and at varying centres for filling that is completed in one pour.

The head of the column formwork can be used to provide support for the beam formwork, but while this gives good top lateral restraint it can make the formwork complex. Alternatively, the column can be cast to the underside of the beams. Later on, a collar of formwork can be clamped around the cast column to complete the casting and support the incoming beam formwork.

Re-usable plastic formwork is generally used for quick pours of concrete. The formwork is assembled either from interlocking panels or from a modular system and is used for relatively simple concrete structures. It is not as versatile as timber formwork due to the prefabrication requirements and is best suited for lost-cost, repetitive structures such as mass housing schemes.

Stay-in-place structural formwork is generally assembled on site using prefabricated fibre-reinforced plastic. It is used for concrete columns and piers and stays in place, acting as permanent axial and shear reinforcement for the structural member. It also provides resistance to environmental damage for both the concrete and reinforcing bars.

Proprietary systems are used to support vertical formwork while concrete cures, consisting of a series of tubes and ties.

The following requirements should be satisfied by good formwork: